Cheers and congrats for Nunavut mayor at climate rally

“Where I’m from, our climate is already changing” 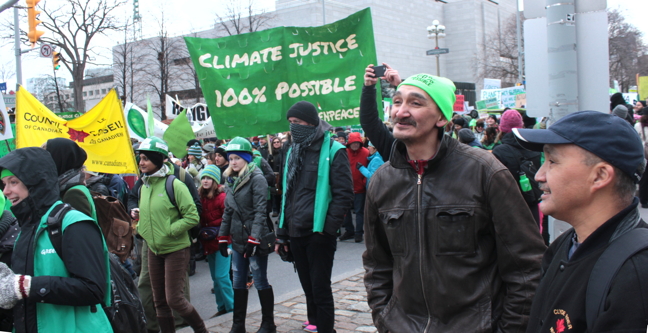 Jerry Natanine, in green tuque, with a friend from Clyde River Elisha Sanguya, in ball hat, take part in a march in Ottawa in support of renewable energy Nov. 29. (PHOTO BY LISA GREGOIRE)

OTTAWA — While reports differ on exactly how many people descended on downtown Ottawa for a climate rally and march Nov. 29 — reports range from 5,000 to 25,000 — we know at least one participant flew a long way to make an appearance.

Clyde River Mayor Jerry Natanine wasn’t in Ottawa just to show his support for renewable energy — he was one of the rally’s featured speakers at a pre-march rally in front of Ottawa city hall, an event that included one of Canada’s most renowned environmentalists: David Suzuki.

“Now’s when the butterflies start,” said Natanine, standing beside a stage set up for the event, folding and unfolding a paper containing notes for his speech. He looked out over the sea of faces waving signs and other props for the march.

But you wouldn’t have known it.

Standing on the stage in sub-zero temperatures, bare-handed in a leather jacket and shoes, Natanine joked, “A little bit chilly today but when I left [Clyde River] two days ago, it was -43 C with the windchill so, you can take comfort in that.”

A joke about Arctic weather always goes over well. The crowd laughed and cheered. But then Natanine turned to more serious matters.

“Where I’m from, our climate is already changing. The glaciers are melting and the ice-free season is a lot longer,” he said. “Way up north where I’m from, there’s no old ice anymore. It all disappears every summer.”

Natanine also talked about his community’s legal fight to stop seismic testing for oil and gas reserves under the seabed off the coast of Baffin Island.

The Clyde River hunters and trappers organization, the hamlet, as well as himself, as mayor, are currently seeking leave to appeal their case to the Supreme Court of Canada in an effort to stop the seismic canon blasting which is set to begin in summer 2016 and which has been approved by the National Energy Board.

A round of boos erupted from the audience.

“Obviously, that’s going to have a negative impact on the environment and our way of life. We’ve lived up there for thousands of years and living in harmony with the animals and the climate and we want that to continue for future generations for our children,” Natanine said.

But, he told the audience, alternatives exist and even small communities like Clyde River can make significant changes to the energy they consume.

“Thanks to people like you who support us, we’re in the process of getting solar panels installed in our community to power buildings,” he said, to more cheers from the crowd.

“We don’t want to see more polluting fuels used to contribute to climate change to harm our environment and our wild animals and, in the process, harming our Inuit way of life and our traditions.”

He said the fight against seismic testing is not over and that he appreciates the “courageous leadership” of people across “Turtle Island” — a reference to one Aboriginal depiction of North America — to stand up to industry and protect the land.

“We stopped the Keystone pipeline,” he said, to more boisterous cheers. “And we’re slowing down the tar sands expansion. And the next thing we’re going to do is keep Arctic oil in the ground! Qujanaamiik! Thank you!”

The applause continued even after Natanine left the stage. Later, as he made his way through the crowd to get ready to march with is friend Elisha Sanguya — an Ottawa ex-pat from Clyde River — people sought him out to shake his hand saying, “Good job mayor!” and “Keep up the good work!”

David Suzuki spoke after Natanine, forming a double shot of inspiration for the crowd. The well-known environmentalist and long-time host of CBC’s The Nature of Things, thanked everyone for coming and said he wasn’t representing anyone. He said he was just a grandfather and an elder.

He said 100 per cent renewable energy use is not only achievable worldwide but the “the only way forward,” he said.

The rally drew people of all ages, cultures and backgrounds. Trade unions were represented as were faith groups, environmental organizations and many Aboriginal peoples. Billed as a family friendly event, there were many children carrying signs and wearing green for the occasion.

The rally was set to coincide with the start of the United Nations climate change talks, COP21, which began today, Nov. 30, in Paris.

After the rally, thousands of people marched along closed off streets, singing songs, playing instruments and shouting chants. They wove downtown and ended up on Parliament Hill for a closing rally.

“I came because I feel an obligation to tell people who have been our supporters what’s been happening and to express my gratitude. I’m getting re-energized too,” Natanine said, during the walk.

“To see that people are genuinely concerned about protecting the environment, it’s inspiring,” he said. “I’ve got no words for it.”

While in Ottawa, Natanine has also been invited to participate in a roundtable discussion at L’Université d’Ottawa on how best to extract oil from the Arctic at. He said he’ll be making a presentation on how best to include Inuit in the process through meaningful consultation.

“I felt very honoured that they would think of me,” Natanine said. “I’m glad to bring the Inuit perspective.”

You can see a video of Natanine’s speech by going to the Greenpeace Canada Facebook page here.