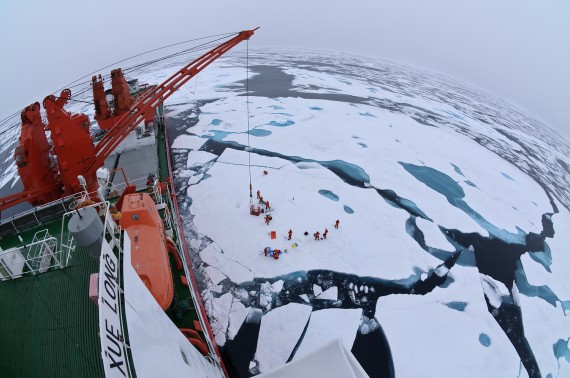 Drift ice camp in the middle of the Arctic Ocean as seen from the deck of China’s research icebreaker Xue Long or Snow Dragon, which went through the Northwest Passage last September. (PHOTO/WIKIPEDIA COMMONS)

China is ready to take its place at the top of the world, according to the country’s new Arctic policy paper.

“China is an active participant, builder and contributor in Arctic affairs who has spared no efforts to contribute its wisdom to the development of the Arctic region,” states the policy white paper, released last Friday, Jan. 26.

In the policy, China says it’s a “Near-Arctic State,” one of the continental states that are closest to the Arctic.

As well, “the natural conditions of the Arctic and their changes have a direct impact on China’s climate system and ecological environment, and, in turn, on its economic interests in agriculture, forestry, fishery, marine industry and other sectors,” the policy paper said.

“The fact that the Chinese took the time to develop and present a public policy statement on the Arctic is important onto itself. This is an authoritarian government that does not need nor does provide public policy documents. This demonstrates the importance that the Chinese place on the Arctic,” Rob Huebert from the University of Calgary’s Centre for Military and Strategic Studies told Nunatsiaq News.

The policy paper, issued by the State Council Information Office, lists all the ways China has already become involved in the Arctic, such as by hosting an Arctic Science Summit Week and sitting as an observer at the Arctic Council.

The policy paper manages at times to sound both altruistic and self-serving.

China says it wants “to build a community with a shared future for mankind and contribute to peace, stability and sustainable development in the Arctic.”

But, at the same time, it also wants to seize the “historic opportunity in the development of the Arctic,” by taking a big role in developing tourism, “exploration for and exploitation of oil, gas, mineral and other non-living resources” and fishing.

You can already see that desire for a role in resource development in the recent announcement of Chinese company’s investment in Sabina Gold and Silver Corp’s Back River gold mine in western Nunavut and China’s many overtures to Nunavut’s resource-rich neighbour, Greenland, whose leaders visited China last October, and where China has increasing mining interests and even proposed using unused naval base as an operations facility.

Shipping route development in the Arctic remains a principal focus of China’s new policy, released only months after the Chinese research icebreaker the Xue Long, or Snow Dragon, transited the Northwest Passage last September—a trip that was eyed with interest by the Canadian Forces, which sent a patrol ship to keep track of the icebreaker.

The Arctic policy paper continues to make a big pitch for China’s right to ship around the Arctic.

It pedals a soft image—that of the “Polar Silk Road”—to describe its vision for a shipping trade route around the circumpolar region, through a reference to the “silk road,” which was an ancient network of trade routes joining China to Europe and other markets.

For its ”Polar Silk Road,” China says it will encourage “its enterprises to participate in the infrastructure construction for these routes and conduct commercial trial voyages in accordance with the law to pave the way for their commercial and regularized operation.”

The goal: “commercial and regularized operation” for Chinese vessels, and a new link in its “Belt and Road” scheme to connect China to the rest of the world through trade corridors and infrastructure projects,

In its Arctic policy, China takes pains to assert its right to freely use Arctic waters, such the Northwest Passage and the central Arctic Ocean, for its China-centered trading network, asking all to “respect the rights and freedom of non-Arctic states to carry out activities in this region in accordance with the law, and respect the overall interests of the international community in the Arctic.”

But, in terms of substance, it is clear that the Chinese want to calm fears about their growing interest and activities in the region, Huebert said.

“The document takes great effort to demonstrate that China will play by the rules, but that it intends to be a full participant in the creation of those rules,” Huebert said.

Huebert also noted that the document is important in what it does not say.

“It does not tell us if they believe the Northwest Passage and Northeast Passage are internal waters, the Canadian and Russian positions, or if they are straits used for international navigation, the American position. The document, not surprisingly, does not say anything about growing Chinese interest in the increasingly important security elements of the region.”

China’s vice-foreign minister, Kong Xuanyou, was quoted as saying during a media briefing in Beijing on the policy paper that “some people may have misgivings over our participation in the development of the Arctic, worried we may have other intentions, or that we may plunder resources or damage the environment.

“I believe these kinds of concerns are absolutely unnecessary,” he said.

But Nunavut Sen. Dennis Patterson said in a commentary last November that Canada must assert sovereignty over the Arctic while there’s still time.

“Most countries choose to ignore Canada’s claim to the Northwest Passage. The United States claims the passage is an international strait that the vessels of any country have the right to traverse. Other countries argue that the area should be deemed Canadian territorial waters, allowing foreign states the unimpeded right to “innocent passage,'” he said. “Canada is at serious risk of losing control and sovereignty over its Arctic.”

For those with a deeper interest in knowing more about China and the Arctic, there’s a new book, “China’s Arctic Ambitions and What They Mean for Canada,” just out from the University of Calgary.