“We hope they can discover more about Inuit culture” 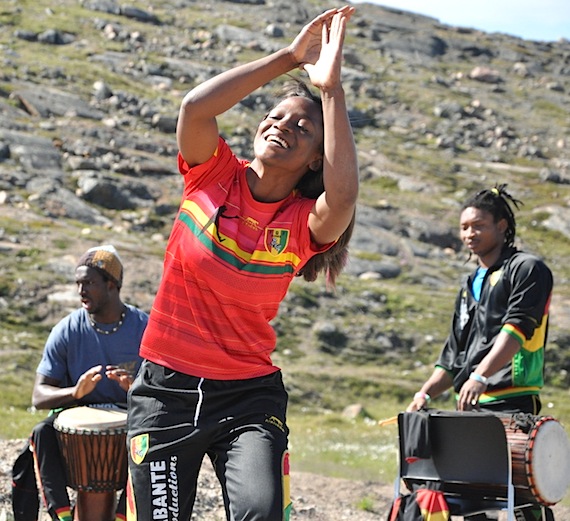 Members of the Kalabante circus troupe from West Africa perform Aug. 3 in Iqaluit, where, on their one-day layover, Kalabante members were put up by the Qaggiavuut Society. (PHOTO BY THOMAS ROHNER)

From Guinea in West Africa to Igloolik on north Baffin Island to New York City.

That’s the unusual route a group of top-notch African circus performers will take this month as they collaborate with the Nunavut circus group Artcirq.

Artcirq founder Guillaume Saladin, in Iqaluit Aug. 3 to greet nine members of the Kalabante Productions troupe, told Nunatsiaq News that the two circus groups will hold youth circus camps and performances in Igloolik over the next two weeks.

“Those guys are amazing, and their energy is very strong. We’re looking forward to seeing what their impact is going to be on the whole town,” Saladin said.

Six years ago, members of Artcirq, including Saladin, travelled to Guinea to learn more from the Kalabante troupe in their home country.

The documentary “Circus without Borders” followed that trip.

“This now is the next step in that documentary: Kalabante is coming to Igloolik,” Saladin said.

“We hope they can discover more about Inuit culture and learn as much as they can to see how different and how similar their country is.”

Kalabante’s two-week stay in Igloolik will include a trip out onto the land, Saladin said, for some hunting and fishing.

While in Igloolik, the West African performers will stay with Saladin, who spent his childhood summers in Igloolik before opening Artcirq in 1998 in an effort to curb youth suicide rates.

“There will be 12 of us in my little house. There’s lots of room on my floor. A trip like this is so expensive, we can’t afford to pay for them to stay anywhere else.”

The circus camps for youth will be run out of Igloolik’s Black Box — a youth recreational centre with year-round programming, Saladin said.

“This will be a historical moment, it’s never happened that Igloolik received nine Africans,” Saladin said.

“If our little non-profit organization can make such an impact in a small community, the government should raise their standards and create an impact with all the big resources they have.”

After Igloolik, members of Kalabante will fly to New York where the troupe will begin an American tour of performances, said Saladin.

Saladin said it was important to recognize the contribution of sponsors, which, despite its popularity, Artcirq has struggled to secure in the past.

The sponsors of this collaboration with Kalabante include First Air, the Canada Council, and Nunavut’s culture and heritage department.