“The city does not intend to continue operating with deficits” 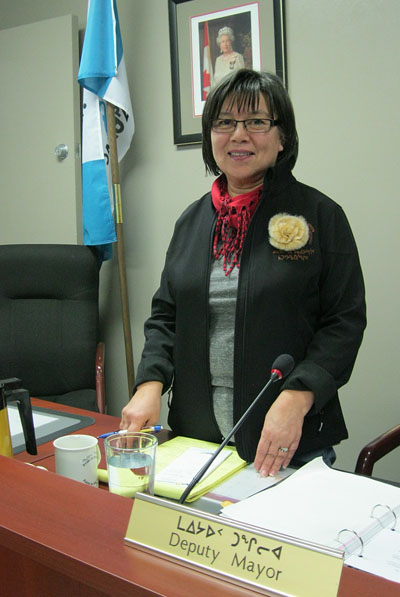 Iqaluit Mayor Mary Wilman said in a letter sent Feb. 11 to the Iqaluit Chamber of Commerce that the city is happy to continue consulting with the local business community. (FILE PHOTO)

The Iqaluit Chamber of Commerce’s call on the City of Iqaluit to postpone property tax increases this year has drawn no promises from the city.

But the city also says it is ready to discuss its proposed budget for 2015 with the chamber and the business community.

“We will be glad to continue to dialogue with your organization on issues relating to the finances of the city,” says a letter from the city to the chamber, dated Feb. 11 and signed by Iqaluit Mayor Mary Wilman.

“It is in all our best interests to communicate and share with the business community of Iqaluit and this is a priority of ours.”

In a letter sent to the city on behalf of the city’s business community, dated Jan. 30, the chamber alleged that the city “is headed to being at least $10 million in the hole by the end of 2015” and “without any plan for mitigating or eliminating the trend.”

It then called on the city to postpone property tax increases proposed this year – which range from 21 per cent on commercial property to about 31 per cent on industrial property – until the city maps out a plan to reduce or eliminate its deficit.

Without such a plan, the city is in violation of the territory’s Cities, Towns and Villages Act, the chamber said. Such a violation could put the city under direct administration by the territorial government, the group warned.

“Though this is much less than the [$10 million] amount stated in your letter, it is still important to note that the City does not intend to continue operating with deficits and will be moving forward in 2015 with administrative changes that will address these issues,” the city states.

In an interview with Nunatsiaq News this past Feb. 4, Shawn Lester, president of the Iqaluit Chamber of Commerce, said $10 million refers to an “accumulated deficit,” built up over the years 2013, 2014 and 2015.

An amount of $4 million accumulated in three years “doesn’t sound too bad,” he said Feb. 4.

Lester confirmed to Nunatsiaq News from Ottawa, Feb. 23, that the group received the city’s letter by Feb. 13 but said he would not comment on it.

“The board will be going over the letter,” he said. “The board has to make a decision on what they’re going to do.”

The city’s report of a $4.5 million deficit in the general fund is up from the $4.19 million that administration reported to city council at a Dec. 23 meeting, before council limited tax increases on private homes to 7.1 per cent.

Iqaluit’s business-owners say the city is protecting homeowners from tax increases, and putting the brunt of the burden on the shoulders of businesses.

“We then are required to adjust our pricing so that we can stay a viable and integral part of Iqaluit’s economy,” the chamber’s Jan. 30 letter to the city states.

Higher local prices then “translates into consumers looking for alternatives that deal a blow against a vibrant local economy.”

In its reply to the chamber, the city says it “acknowledges that we are working towards remedying issues that have been compiling over the years.”

The city’s letter lists six ways that citizens of Iqaluit “and groups such as the chamber of commerce can have access to information.”

First, the chamber has a seat on the city’s economic development committee, and the chamber president “was invited in person to a ‘sit down’ with council to discuss the 2015 Budget and Property Tax Bylaw.”

The city also says citizens can contact city councillors for questions through the city’s website, and that city meetings are open to the public and that “our budget process has been well documented.”

Wilman also states in the letter that budget approval and tax increases include “time for sober thought.”

The city has taken steps to allow the public to comment on the draft budget, the letter states. The document is now due for three readings by council, which “allows for even more time and reflection,” the letter says.

Letter from Iqaluit mayor to Iqaluit Chamber of Commerce