Climate change could cost Canada $43B a year by 2050: Report 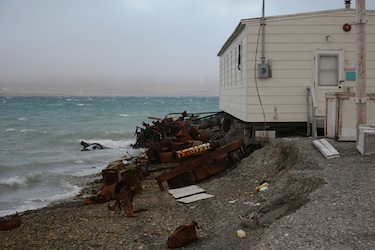 The federal advisory panel warned in the study, titled “Paying the Price: The Economic Impacts of Climate Change for Canada,” that Canadians could have a steep price to pay if governments reject the science that links human activity and greenhouse gas pollution to global warming. Consequences include shoreline erosion in the North — seen here in 2009 in Resolute Bay as a building once used by the federal Department of Fisheries and Oceans, now taken down, lies perilously close to the water. (FILE PHOTO)

OTTAWA — Canada’s environment minister says his government is not surprised that its own advisory panel on business and environmental issues is warning that greenhouse gas emissions could cost the Canadian economy up to $43 billion each year by 2050 if it fails to come up with a domestic plan to tackle global warming.

The groundbreaking assessment, submitted to government by the National Round Table on the Environment and the Economy, is the first of its kind to analyze Canadian trends in the growth of greenhouse gas emissions, population and the economy, in the context of climate change science.

The federal advisory panel warned in the study, titled Paying the Price: The Economic Impacts of Climate Change for Canada, that Canadians could have a steep price to pay if governments reject the science that links human activity and greenhouse gas pollution to global warming. The costly consequences could include major flooding in coastal cities, effects on human health and dramatic changes in the forestry industry and other sectors.

“Ignoring climate change costs now will cost us more later,” said the report, which was produced by the National Round Table on the Environment and the Economy, an independent organization whose members were appointed by Harper’s government.

But Environment Minister Peter Kent told the House of Commons that the government was already on top of the situation, noting its commitment to reduce greenhouse gases in Canada roughly to 1990 levels within the next 10 to 15 years, as well as $58 million in funding over two years, announced in the 2011 budget, to help Canadians adapt to climate change.

“Today’s report merely echoes what our government has long recognized,” Kent said in response to questions from NDP MP Laurin Liu. “And that is the importance of adaptation to climate change.”

The report concluded that Canada would pay as much as $5 billion per year to deal with climate change impacts within 10 years, before reaching a range of $21 billion to $43 billion by the middle of the century.

Liu did not share Kent’s optimism about the government’s existing policies.

“Our coastal communities, our forestry industry, and the health of Canadians will all suffer unless we take action right now,” said Liu, who represents a Montreal-area riding. “Yet, this out-of-touch government has produced no plan to deal with the impact of climate change on Canadians.”

The report stresses the importance of assessing long-term decisions in areas such as coastal development, infrastructure and forest management in the context of climate change, through adaptation strategies.

“The highest costs result from a refusal to acknowledge these costs and (to) adjust through adaptation,” said the report, published following extensive research and reviews by academics and stakeholders from the business world and the environmental movement.

The study comes nearly five years after a major British government report by economist Nicholas Stern concluded that climate change could provoke the greatest market failure ever in the global economy.

David McLaughlin, the president and CEO of the advisory panel, said the report provides some new context for Canada, which has seen the debate on global-warming policy revolve mainly around the cost of reducing pollution for industry and consumers.

“Little attention has been paid to the cost of inaction, to what economic damages could accrue to Canada and Canadians as global emissions rise and climate change plays out,” said McLaughlin, a former chief of staff to Finance Minister Jim Flaherty.

“Our report also shows that adapting to climate change makes economic sense. It can lower the costs of climate impacts by preventing damage, saving money and lives.”

Kent has not yet introduced a plan to meet Ottawa’s greenhouse gas emissions targets, let alone stop the growth of pollution.

Harper has said the government’s focus remains on the economy and job creation.

The report estimates the costs of climate-change impacts could eventually reach up to one per cent of the Canadian Gross Domestic Product.

But it also noted that some estimates could be understated because of uncertainty surrounding the estimated value of goods and services provided by natural ecosystems at risk.

“Since humanity’s well-being — economic and otherwise — relies on healthy functioning ecosystems, the economic significance of (the) ecosystem impacts of climate change could well dwarf global GDP,” said the report. “Ecosystem stress from climate change will play out across Canada’s economy in some unexpected ways.”

Some specific examples in the report warn about:

– A greater risks of illness and death and millions of dollars of related health-care costs in cities such as Montreal, Calgary, Vancouver and Toronto;

– The risk of major flooding in Metro Vancouver.

The report urges governments in Canada to redouble efforts to support academic research and partnerships with universities and all of the affected stakeholders in the private sector to develop the best plan forward.

It said that while adaptation may have a cost, it could produce future savings and benefits through proper research and planning.

“So far we have shown that we expect to face costs and that we need to adapt to that reality,” the report says.

The analysis noted there are also risks of catastrophic economic costs associated with scenarios in which average global temperatures rose higher than a threshold of two degrees Celsius.

“Such rapid climate change and resulting impacts are beyond humanity’s collective experience,” said the report. “Not only that, these impacts will likely never be fully anticipated, with surprises likely looming on the horizon. . . . If catastrophe occurs, then between five per cent and 25 per cent of GDP is expected to be lost.”