“Climate change is not just an environmental issue, it is a human rights issue” 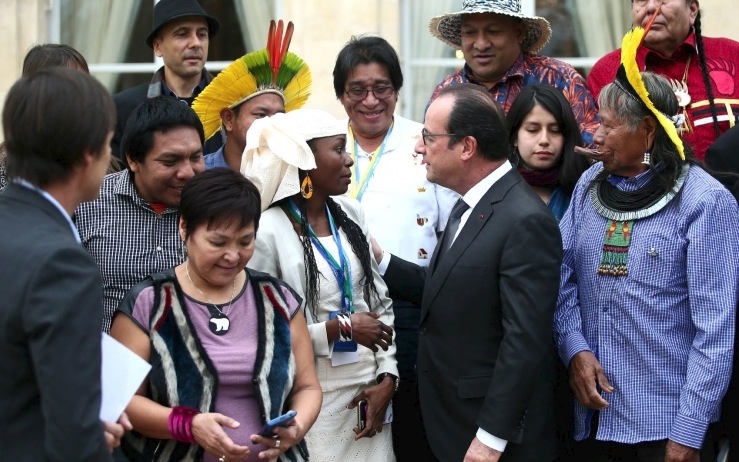 Dressed in traditional garments, Indigenous representatives at the COP 21 climate change talks in Paris — who included Arctic delegation head Okalik Eegeesiak from the Inuit Circumpolar Council — met Dec. 2 with François Hollande, the president of France, at his official residence, the Élysée.

But despite Hollande’s words of encouragement to the group, which you can listen to here in a video from his office, Indigenous peoples may face disappointment as diplomats and official delegates to the climate change talks fine-tune their new global pact on climate change.

That’s because they may cut out a reference in the agreement’s text on the link between climate change, human rights and the rights of Indigenous peoples, the ICC says.

Some countries are not supporting the inclusion of text that recognizes that climate change impacts human rights and the rights of Indigenous peoples, Eegeesiak, who heads the unofficial Arctic delegation, said in a Dec. 4 ICC news release.

And that portion of the text is “vitally important,” Eegeesiak said.

“Climate change is not just an environmental issue, it is a human rights issue and the melting of the Arctic is impacting all aspects of Inuit life — therefore the final text must make the rights of Indigenous peoples operative and keep it in Article 2.2 [of the most recent proposed climate change agreement draft text, which you can read here]. We have the right to be cold,” Eegeesiak said in the ICC release.

“I think we can all agree that every human being has a right to a safe environment and Indigenous peoples are on the frontline of climate change impacts. All of our communities from the Arctic to the Amazon are challenged by changing climates.”

Eegeesiak urged Canada, Norway, the United States, Denmark, Greenland, Russia, Sweden and Finland to support their Indigenous peoples and “fight for the inclusion of human rights and the rights of Indigenous peoples language to remain.”

“We need communities in these countries to mobilize and pressure their respective governments to this effect. So that pressure abroad matches the pressure Indigenous delegates are exerting on negotiators here in Paris,” she said in the release.

The ICC has also circulated its position paper, called “Inuit Call for Action from Global Leaders,” aimed at the 195 national delegations attending COP21, the 21st “conference of the parties” to the United Nations Framework on Climate Change.

The ICC’s position paper urges global leaders, among other things, to respect the rights of Inuit and other Indigenous peoples.

Eegeesiak plans to participate in events such as Arctic Day, Dec. 8, at the Indigenous Pavilion and a three-day forum, Dec. 10 to Dec. 12, called the “Arctic Encounter Paris” conference, the only Arctic-related policy and economics side event to take place during the COP21.