Thanks to co-op, former cable technician, Kimmirut gets a Xmas present 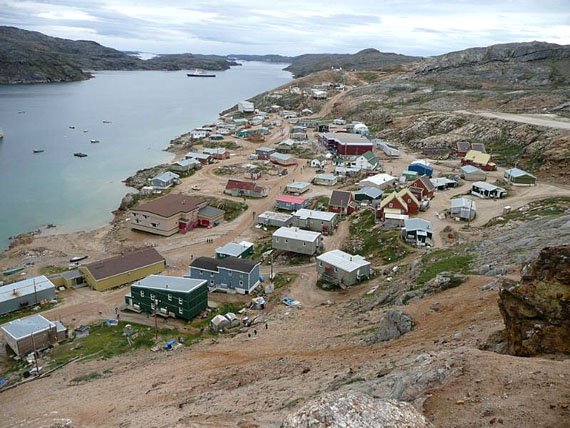 The Hamlet of Kimmirut, seen here in the middle of summer, has been without over-the-air radio service since March. Residents were happy to celebrate Christmas with community radio broadcasts through a cable TV channel that went online just before the holidays. (PHOTO COURTESY OF CAMERON BOBINSKI)

Kimmirut residents got a welcome gift just in time for Christmas and the new year, when the community’s co-op and a former cable technician finally put the hamlet’s community radio back on the air after nearly nine months of radio silence.

It’s not “on air,” in the literal sense, but through the hamlet’s local cable television service, which is provided by Kimmirut’s Kimmik Co-op.

The hamlet’s only transmitter died this past March.

Efforts to repair it have been delayed by dizzying staff changes, hang-ups in shipping, transportation and payment for parts, and lack of qualified staff.

Kimmirut has had no fewer than seven permanent, interim and acting senior administrative officers since mid-2013, and an eighth will start in the new year.

None of this year’s hamlet administrators have been on the job long enough to see the repairs through to completion.

The hamlet’s last permanent SAO, David Alderdice, told Nunatsiaq News in October that the community had a long list of more essential priorities to cover, which ranked well ahead of repairs to the radio transmitter.

South Baffin MLA David Joanasie, who represents the small community of about 450 residents, noted that complaints about the radio silence intensified as the year progressed, particularly as the festive season approached.

“It’s a concern leading up to Christmas time, because there’s a lot of people sending greetings or calling from in and out of town, and even within the community,” he told Nunatsiaq News just one week before Christmas.

“If it doesn’t get up and running, it will sorely be missed.”

“I used to work for the cable, for quite a few years,” said Bobinski, who is now superintendent of the community’s power plant, with Qulliq Energy Corp.

“The people go on the radio, and they give Christmas wishes to everybody and stuff like that, and everybody in town was talking about how much it was going to be missed,” he said Dec. 30.

“So that’s why I figured I would give it a shot, and get it all hooked up.”

After the radio transmitter went down in March, the co-op started running CBC North’s radio broadcasts through its cable TV advertising channel.

Bobinski knew there was a way to transmit Kimmirut’s community radio on the same channel, and allow the hamlet to decide when to switch to community radio broadcasts – just as it normally did from the radio transmitter when it was working.

“I had thought about that before,” the former cable technician said. “But then I thought that transmitter might come in, in time.”

The hamlet ordered a new transmitter just before the holidays to replace the damaged one.

Lack of news on the delivery was too much to take just a few days before Christmas, and that’s when Bobinski decided it was time to act.

He took his cable transmission idea to the hamlet office and the co-op, who agreed to the fix, and then went to work on Dec. 23.

“We just managed to do some splicing so that the local radio and CBC could play,” he said. And play they did — on co-op cable service’s channel 3.

“We just fixed it up so that it could play the local radio or the CBC, whichever one the town chooses,” Bobinski said.

“We were so excited, because we had to do some Christmas readings and get incoming calls from other communities,” recalled Carol Etuangat, clerk and interpreter for the hamlet.

“It was like Christmas to us, anyway,” she laughed.

Kimmirut residents “were just ecstatic about it.”

The hamlet’s community broadcast went up about four hours a day during the week of Christmas, half in the morning and half in the evening, Etuangat said.

Broadcasts of community notices and messages will continue until the radio transmitter goes back online, according to the hamlet’s community economic development officer, Petanie Pitsiulak.

The hamlet is ready to hire two radio announcers, she said, thanks to an unspent $15,000 grant that must cover community radio broadcasts.

“It’s a good thing it’s back on air,” said Pitsiulak, noting that many hamlet residents rely on the community radio broadcasts to keep informed on public service announcements, community activities, and overall news from the outside world.

Residents have relied on the internet to fill the gap, but not everyone has access to computers.

Radio service is particularly important for the community’s elders, and residents who only speak Inuktitut, Pitsiulak said.

“Radio is a big thing for them. They need it so they can hear what’s happening.”

Not all residents have cable TV either. The Co-op provides about 40 channels for a monthly fee.

“People are complaining,” said Lucassie Bobinski, acting manager of the Kimmik Co-op, and son of the fix-it man, Cameron.

“They don’t want to have to pay for cable, just to pick up the radio,” Lucassie said.

Residents are at least satisfied with the temporary fix until the radio transmitter goes back online, he added.

“Everyone’s happy. They were thanking my father and everything, personally.”