Cold snap: How to fight fires, and stay alive, North of 60 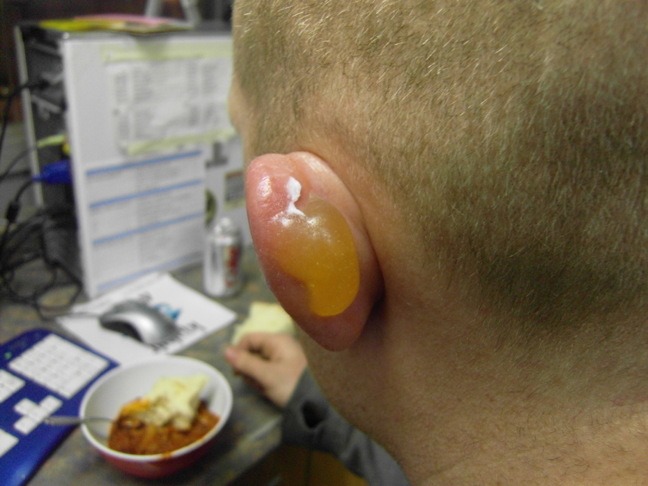 What frostbite did to the ear of Iqaluit firefighter Lt. Matthew Edmunds, an eight-year veteran of Iqaluit Emergency Services, on the night of the white row fire five years ago. (PHOTO COURTESY MATTHEW EDMUNDS) 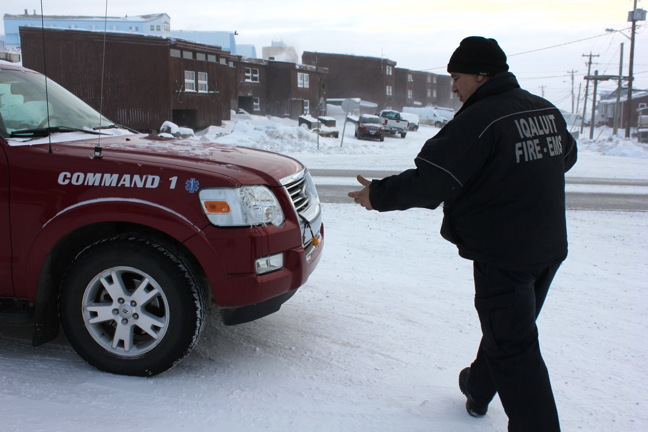 Iqaluit’s deputy fire chief Stephane Dionne, a retired Royal Canadian Air Force mechanic, heads out of the fire hall to offer a tour of the Iqaluit training ground, a lot down Federal Road with 12 props including makeshift residences made out of sealift containers, a car, a hunk of aircraft fuselage and a flashover simulator. This summer, Dionne says, they hope to have the training ground certified by the National Fire Protection Association. See more photos of the tour on our Facebook page. (PHOTO BY LISA GREGOIRE) 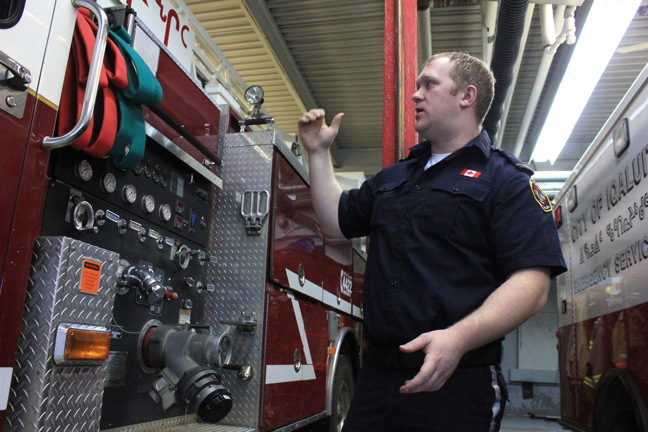 By the time the arson fire at Creekside Village, known as white row, was out on Feb. 27, 2012, it had consumed 22 units and taken two lives. (PHOTO COURTESY IQALUIT FIRE DEPARTMENT)

When your ears freeze, the cartilage and skin shrink to about half their normal size until they are hard, numb lumps.

When they thaw, they fill with fluid and grow to three times their normal size and the pain, like blow torches cooking both sides of your head, is excruciating.

If you’re a northerner who has spent a lot of time outdoors in winter, you might know what that feels like.

But frozen ears are just one of the possible risks when you’re at a row house complex on fire and it’s late February, pitch dark and about -50 C with the windchill.

At that point, you’re not thinking about your ears. You’re trying to loosen the frozen stem nut on the top of a fire hydrant—the nut that turns a long metal shaft about five metres down into the earth and opens an access valve, allowing water in a buried pipe to flow up into the hydrant and, eventually, into a hose.

The fire is spreading. The supply hose is attached to the hydrant but the nut won’t turn. You pull harder on the wrench. You call for backup. A one-person job is now a four-person job.

You’ve got a balaclava on your head and a helmet with the visor pulled down and everyone’s shouting into the frigid wind and trying to follow radio instructions from the site commander whose job it is to save lives and put out fires while keeping firefighters alive and unharmed.

The row house is engulfed, turning night into day, and maybe there’s someone trapped inside. So while you’re outside trying to get a water supply, hands going numb and losing precious dexterity, your colleagues are inside the inferno, trying not to burn, searching for life.

As you’re hauling on the hydrant’s stem nut, it breaks. Metal does that in extreme cold. Water blasts through the supply line to the truck’s hose bed where it can be routed into hand lines to fight the fire. This is good. But they won’t be able to turn it off. This is bad.

Maybe 10 minutes have passed since you arrived on scene. Maybe 20. It’s hard to tell. The fire is starting to devour adjacent units. People have been evacuated in their pyjamas. They’re frantic. Two building residents are still missing and unaccounted for.

Tick, tick, tick. Flames are shooting 20 metres into the sky.

You call your colleagues in public works so they can manually close off the underground access valve and detach the hose with a front end loader. The loader will later drop that hose into a dump truck and take it back to the fire hall to thaw.

The ladder truck needs to be moved but it was charged with water too so in the minute or two it takes to move it, the pump freezes. Someone has to drive it back to the station to thaw.

Meanwhile, your colleagues have re-positioned the main pumper, you find another hydrant nearby and uncoil another hose. You attach it, turn the stem nut and charge the line with 60 pounds per square inch of water pressure. This time, hand lines are ready to go.

If you’re holding one of those hand lines, you open the nozzle and water shoots out. Spray settles on your clothes. Soon you’re wearing ice armour. You hinge your elbows and knees to stay warm and mobile.

“In that fire, you could actually hear the water leaving the nozzle and crystallizing when it hit the air,” says Iqaluit firefighter Lt. Matthew Edmunds, flicking his fingers out. “Psshhh.”

“It was snow by the time it hit the fire,” says Lt. Michael Chappell, an Iqaluit volunteer firefighter of 10 years.

Welcome to the Iqaluit fire department.

The above scene was loosely based on some of Edmunds’ and Chappell’s recollections of the chaos that unfolded five years ago today when a section of Iqaluit’s Creekside Village burned down, destroying 22 units and killing two people—one of which, police later said, had deliberately set the fire.

It was one of the most challenging fires Iqaluit’s Emergency Services department had ever dealt with, not just because of its magnitude but because it was so damn cold that night.

“The environment is unforgiving of any miscalculation,” says Chappell. “We were doing the best we could. It was the accumulation of the extreme environment.”

Eight firefighters got frostbite that night, including Edmunds, whose ears somehow got exposed to the air while he and three colleagues wrestled to open those hydrants.

A fellow firefighter noticed his ears looked strangely shrivelled when the two were inside the pumper truck. They still ache sometimes, Edmunds says. “I always have a hat in my pocket.”

Edmunds, Chappell and Deputy Fire Chief Stephane Dionne, sat down with Nunatsiaq News in January to talk about that Creekside fire and the unique challenges they face every day as emergency responders in Iqaluit.

For example, sometimes they run out of water, as was the case when they fought three fires in the recent past: the First Air hangar in 2001, Joamie School in 2003 and St. Jude’s Anglican Cathedral in 2005.

If you run out of water, there’s little you can do except dig trenches to prevent it from spreading or pump salt water into the firetruck—if there’s open water and if it’s high tide. Firefighters can use fire retardant foam but even that needs water so you can’t use it when you run dry.

Iqaluit has 20 full-time firefighters, including two Inuit, and 21 volunteers.

The emergency services department has a 2008 pumper truck and a 1998 ladder truck. It also has a 1988 back-up pumper affectionately called 503, currently undergoing upgrades to become fully operational again.

Other than water pressure and supply—roughly half of Iqaluit is served by hydrants and the rest require trucked water firefighting—there are multiple other factors that complicate firefighting in Iqaluit.

Though it’s one of Canada’s smallest cities, it contains diverse infrastructure: a busy, hub airport, a fuel tank farm, a hospital, an elders home, a patient home, a finicky and sometimes fiery garbage dump and warehouses full of construction materials, industrial supplies, mining equipment and all kinds of hazardous chemicals.

The airport has its own emergency services, but Iqaluit firefighters serve as back-up if necessary. Also, any crash or emergency outside the airport boundary is the City of Iqaluit’s responsibility.

About 70 per cent of residences in Iqaluit are considered high density, way higher than the average city, they say, where density is confined to certain neighbourhoods. Some buildings have been inspected, others not, and some have makeshift additions: that makes them unpredictable, Chappell says.

Even more unpredictable are the dozens of sheds and shacks that sometimes contain fuels, paints, ATVs, snowmobiles, guns, ammunition and even people.

“As a percentage, shack fires are pretty high so there’s uncontrolled environments, where we don’t know what we’re going into. That’s a big factor. What’s in those shacks is sometimes scary,” says Chappell.

There are higher rates of smoking here and gas sniffing—potentially fatal in combination. There are high rates of alcohol and drug use which lead to higher rates of impairment and elevated risks of accidental fires and arson. It also means a greater chance of someone being passed out when a fire starts.

There’s a high turnover of staff and volunteers. It’s a difficult job and people burn out after a while, or sometimes quickly. That’s a lot of training and resources down the drain.

Then there’s the cold: master of everything.

“It seems like we have a tendency to get our largest scale fires at the worst time of year,” Edmunds says. “Always during the winter season.”

“The good thing is, we don’t get forest fires,” Chappell says, to laughs around the table.

Firefighter suits—called bunker gear—get wet and freeze, making them wind resistant but heavy and stiff. And there are safety rules about what you can wear underneath: no fancy synthetics or wicking materials which can melt to your skin—only cotton-based fabrics, which aren’t particularly warm.

The bunker gear is designed for protection, not warmth, but you can’t wear too many layers underneath because that curbs mobility and flexibility, both critical to the job. As a result, when it’s cold, firefighters rotate through outdoor shifts every 20 minutes, warming up inside trucks in between.

The department also has three ambulances: two main and one back-up.

All Iqaluit firefighters are also emergency medical responders. Imagine wearing only latex gloves to do CPR outdoors, in January.

“You can wear two pairs,” says Edmunds, smiling. That’s a joke. Edmunds once had to get latex gloves cut off at the hospital because they froze to his finger tips. Not a joke. But talking about ambulance duty would be a whole other story.

So, you might ask, why would anybody want to be a firefighter in the North, especially an unpaid volunteer?

And then they all use a word that might surprise you.