“Most of our product is going right to China” 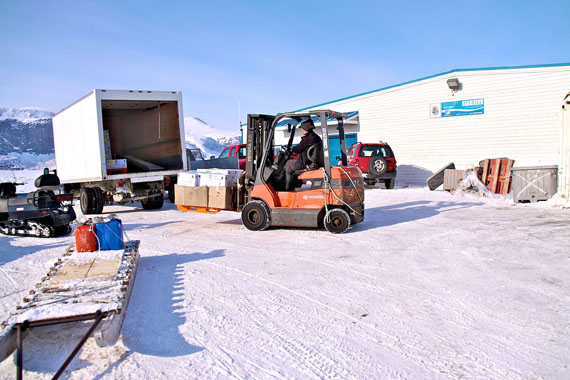 Alex Nakashuk loads the truck which will take fish to the airport and markets far from Pangnirtung. (PHOTO BY SARAH MCMAHON) 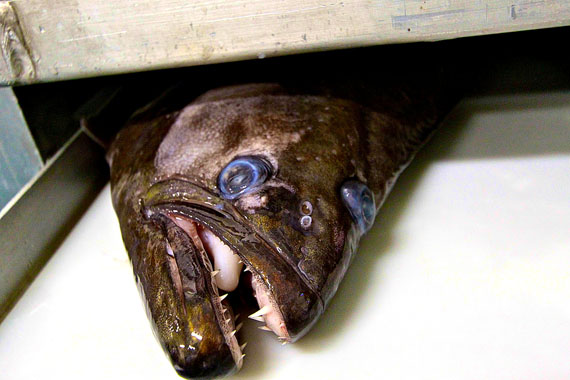 Fish heads are popular in China. (PHOTO BY SARAH MCMAHON) 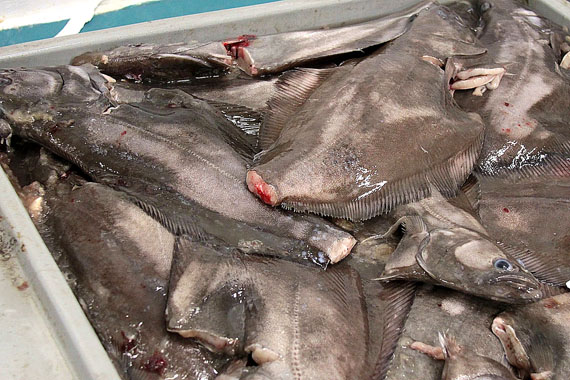 Here’s a box of turbot before it’s sorted and washed. (PHOTO BY SARAH MCMAHON) 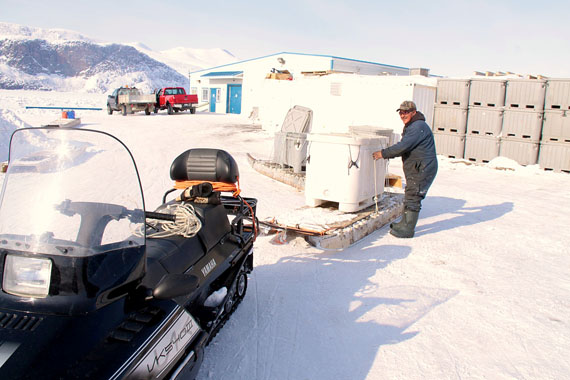 Two very different things have come together recently to put big money into the pockets of some Pangnirtung fishermen: favorable weather and changing palates in China.

Since late January, several Pangnirtung men have earned upwards of $30,000 fishing turbot and at least one has grossed more than $65,000.

The Pangnirtung fish plant pays fishermen $1.30 a pound for their catch, since January 21 it’s purchased more 525,000 pounds of turbot.

“We’re going to be profitable for the 2011 fiscal year,” said Don Cunningham, the manager of the fish plant. “We are just finishing the numbers and I’d rather not make them available yet, but it does look good.”

One reason for the bumper year is the cold weather, which means thick ice. Since mid-January fishermen have had a good platform to work on, and if the cold continues the thick ice could stick around for another week or two yet.

But the work is not easy, explains Cunningham.

Turbot fishermen spend the frigid winter days on the frozen bay, lowering lines with 120-150 hooks a piece through holes drilled in the ice.

A weighted contraption called a kite floats the line just perfectly along the bottom, where the speckled flat fish live. Everything fishermen catch must be towed back to town.

And equipment can be expensive. There is the engine, line, ropes, hooks and lumber for building shacks out on the ice.

This year, fishermen got a big assist from a program through the Fisheries and Sealing Division of the Nunavut Department of Environment that paid new fishermen up to $5,000 to purchase gear.

But as much as the cold and a cadre of well-equipped fishermen has aided in the fish plant’s bumper season there is another reason for success, the Chinese are devouring turbot like never before.

“Most of our product is going right to China,” said Cunningham. “They even buy the heads.”

And why would you want a turbot head? To make soup of course.

“The flavor is very nice and the nutrition is very rich,” said Chef Shirley Cheng, a Sichuan cuisine specialist with the Culinary Institute of America.

“It is good for your skin, for your beauty, for your kidney, and for your brain. If you eat it often you make your body very healthy, and your immune system strong.”

Turbot live in cold northern waters and has been popular among Europeans for centuries.

The Chinese adopted a taste for the fish from them, initially importing it from countries like England and Germany. It’s only recently they have begun importing fish from Nunavut, a move Cheng says the territory should capitalize on.

“I don’t think the Chinese people know that much about where the fish comes from,” said Cheng. “You should label that big, because in your area the air is not polluted and the water is clean and the air is pure.”

Cunningham says such marketing schemes are actually underway. Nunavut turbot is already marketed under the name, “Truly Wild,” and he is working with the Department of Environment on a logo.

Although the cold weather and Chinese demand has been a blessing for the plant the whopping yield has brought along its own set of problems.

One issue is the fish plant took so much turbot this winter, they’ve been unable to process char.

This has upset Pangnirtung’s Hunters and Trappers Organization, whose members often fish for char in April and May.

Another problem is the fish plant didn’t purchase enough packaging on the sealift and have had to order the corrugated cardboard boxes they need for packing fish by air freight, which is expensive.

And then there is the fact that winter will eventually end, the ice will melt and the fish plant will have to rely on a catch brought by ship to a dock that is outdated.

Unfortunately, says Cunningham, the new dock won’t be ready until the fall.

Nevertheless, the bumper winter has spirits running high at the plant, which aside from indirectly employing the fishermen also employs about 20 people.