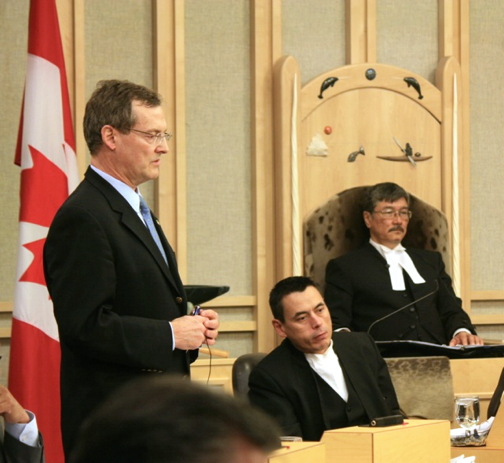 Justice Minister Keith Peterson rose in the Nunavut legislature June 8 to announce upcoming community consultations for a new Nunavut Corrections Act. But his staff could offer few details this week of when they will happen and what they want to consult on. (FILE PHOTO)

Nunavut’s Department of Justice plans to replace its decades-old Corrections Act, inherited from the Northwest Territories, following a series of community consultations that will likely unfold later this year.

Justice Minister Keith Peterson rose in Nunavut’s legislative assembly June 8 and told MLAs that the Corrections Act, “has not had any major amendments in over 30 years.”

“It is now time to update and create a Corrections Act that is made in Nunavut,” Peterson said.

The Department of Justice will be holding community consultation sessions in Rankin Inlet, Kugluktuk, Cambridge Bay, Cape Dorset and Iqaluit “over the next few months,” Peterson said.

“We look forward to hearing from Nunavummiut on how to best craft legislation that promotes safe rehabilitation, healing and reintegration of Nunavummiut in conflict with the law.”

Nunatsiaq News contacted the justice department for a consultation timeline and to request more information on what areas will be open for consultation.

A department spokesperson said consultation dates have not yet been set, no one was around for an interview and no other information would be made available at this time.

The department says it will also consult with other stakeholders and Inuit organizations in conjunction with its public consultations.