“For there to be new growth, the old growth has to step aside” 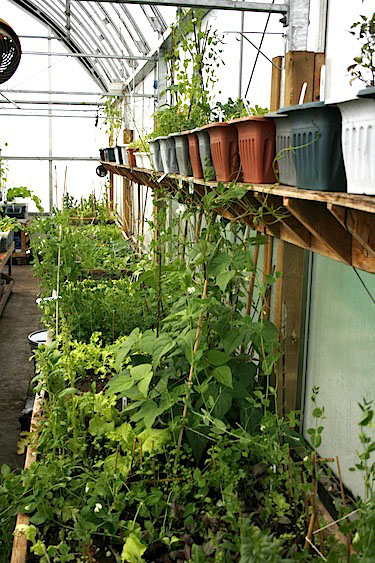 There are changes coming to the leadership of the Iqaluit Community Greenhouse Society, but also the potential for new growth. (FILE PHOTO)

Changes are in store at the Iqaluit greenhouse: at this past Saturday morning’s annual general meeting of the Iqaluit Community Greenhouse Society, Stephen Leyden announced he’s stepping down as president.

Although he said he will continue volunteering with the not-for-profit organization, established in 2001 by residents who want to get their hands dirty and grow their own food, Leyden said his “days in Iqaluit are uncertain moving forward.”

The other two current executive members will also step down.

Sara Holzman, the former vice-president, decided to take the year off from her position to give others the opportunity to lead the greenhouse in new directions with fresh eyes.

And the treasurer, Daniel Afram, who had taken on an interim role to replace the last treasurer, did not attend the meeting on Saturday.

“This has been a most rewarding experience as president for these last years,” Leyden said.

“The greenhouse has been a part of my life and a part of my family. Somehow along the way I became a green activist and lobbyist. I found myself shaking hands with two prime ministers, organizing tours for princes and placing one of my wife’s geraniums at 24 Sussex Drive.”

“For there to be new growth, the old growth has to step aside,” Leyden said.

He joked that his compost worms probably have several offspring all over town from his time running the greenhouse society.

Although there will be changes within the organization, many things will stay the same.

The mandate of improving food security for the community of Iqaluit and promoting a green lifestyle is expected to remain the objective: many past volunteers will continue to participate, community members will still be able to grow plants in the greenhouse for free, and the workshops and the partnerships made with schools and research groups will go on, as well as the bi-weekly trivia nights at The Storehouse—just with new leadership and directors.

“I believe what we do here helps to shape Nunavut,” Leyden said.

“We have accomplished the near-impossible by teaching people what is possible, and inspiring Nunavummiut to do more.”

Southern Baffin Island is part of the Canadian Shield; as such, bedrock can be found throughout Iqaluit. The soils that exist lack nutrients and depth, are cold and are often too saturated for successful plant growth.

So, the greenhouse’s growing season runs from June until September each year.

The large glass structure tucked behind building 959 does more than just offer free space for sprouting plants. It also serves as a space for community composting and for workshops on gardening and living a green lifestyle. Community members can grow plants in the greenhouse for free.

On Saturday, Leyden spoke about the greenhouse society’s accomplishments over the last year, which included the Fall Food and Craft Fair that took place over Thanksgiving weekend.

Baked goods, jams, jellies, preserves and hand-made crafts were sold by local bakers, artisans and amateurs interested in contributing to the community and a do-it-yourself lifestyle.

Another highlight was the Good Food Machine, a program founded in Toronto in 2016 for school children to learn to grow food. The greenhouse society partners with the program to offer this opportunity to Inuksuk students.

On Valentine’s Day, this program posted a photo on Facebook of lush, vibrant greens growing in hydroponics with the note, “It’s -52 outside in Iqaluit, but look at the amazing greens Inuksuk students are growing inside!”

The society also acquired hydroponic grow systems. And it has a chance for new—so-far-undetermined—projects to take on with $15,000 in funding from Trees Canada, such as the goal of growing a tree.

A meeting will take place at the Iqaluit Food Centre on Saturday, June 2, to elect new board members, with four executive officer positions available—president, vice-president, secretary and treasurer—as well as six opportunities for directors for fundraising, funding, operations, planning, outreach and marketing.