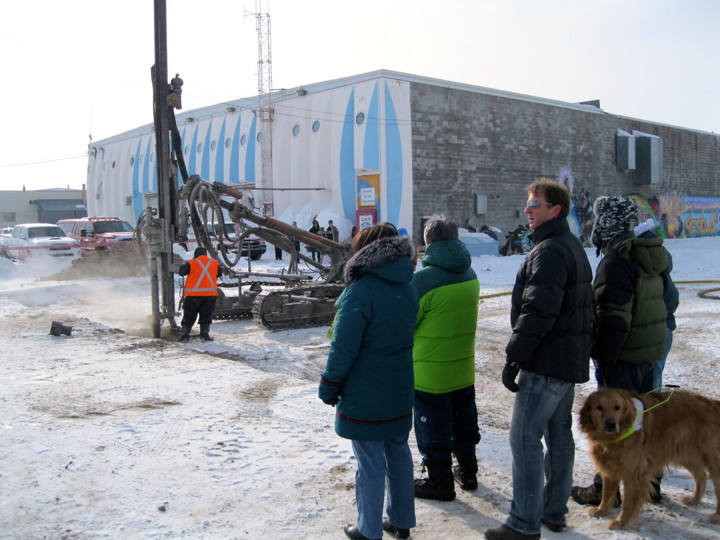 Members of Iqaluit city council witness the start of construction on the city’s aquatic centre by the Arnaitok Complex, at a ground-breaking ceremony April 16. (PHOTO BY PETER VARGA)

The City of Iqaluit celebrated the start of construction on the city’s aquatic centre with a groundbreaking ceremony April 16, as work crews installed the first pile for the new facility’s foundation.

The ceremony also marked a milestone for the REACH Fundraising Campaign, which inched closer to its goal of raising $3 million for the aquatic centre thanks to a $100,000 donation from the Rotary Club of Iqaluit.

The contribution brought donations up to a total of $400,000, said Amy Elgersma, co-chair of the REACH committee and director of recreation for the city.

“We’re really happy and excited,” Elgersma said. The campaign’s $3 million goal will cover part of the aquatic centre’s $34 million costs, which were recently pegged at $6 million less than the $40 million initially expected.

The city’s property-owners approved of the city’s request to borrow $40 million to fund the facility in a ratepayers referendum in 2012.

Mayor John Graham noted city council has made a consistent effort to limit the project’s costs ever since the start of its mandate in October 2012. REACH’s fundraising contributes to that effort.

“The corporate sponsors are starting to have a higher level of interest,” Elgersma said. “Once they see the piles are in the ground, and things are moving on-site, that’s really helpful.”

The Rotary Club’s $100,000 donation is the highest contribution REACH has received so far. Others include the Lester Landau accounting firm, who contributed $25,000, and the World Wildlife Fund, at $15,000.

Each contributor earns naming rights to certain sections of the facility, as well as added publicity in banners and signage around the centre, depending on their donation.

“We see the aquatic centre as a necessity for the community, and for the health and well-being of our elders and youth,” Peter Tumilty, president of the Rotary Club of Iqaluit, said at the ground-breaking ceremony.

The firm Canadrill Ltd. will install all piles for the centre’s foundation in the next six weeks, Elgersma said. Construction of the facility will start later in the summer, once the city has found a builder.

“That’s going out to tender very soon,” she said. The centre is slated for completion in May 2016.