“The decisive agreement for the planet is here and now,” French president says

Delegates at the COP21 plenary listen Dec. 12 to comments from COP21 leaders urging them to accept a draft text and “take that last step” to a global climate-change pact. (SCREEN SHOT) 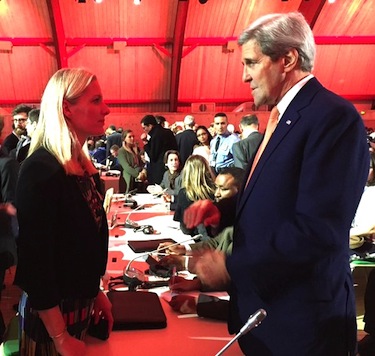 Canada’s chief negotiator at COP21, Catherine McKenna, speaks Dec. 12 to United States Secretary of State John Kerry as they wait for the release of the final COP21 draft text. (PHOTO COURTESY OF C.MCKENNA) 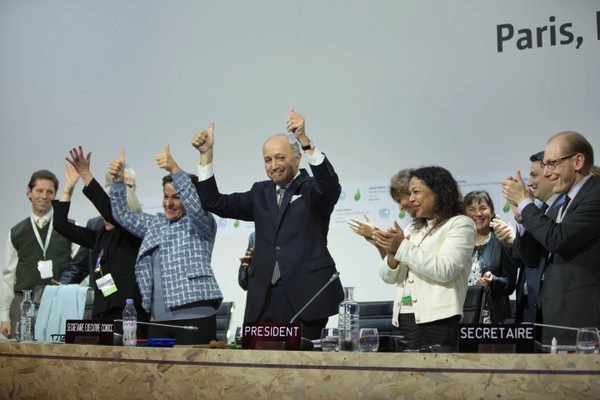 “The decisive agreement for the planet is here and now,” France’s president François Hollande, said Dec.12, as he urged the 196 nations attending the COP21 climate talks in Paris to approve the final text of a new global agreement on curbing climate change.

“We have a common destiny,” said Hollande, adding that Dec. 12 could go down in history “as a major leap for mankind.”

On Dec. 12, the final text of the Paris Agreement was adopted, shortly after 7 p.m., Paris time.

Earlier in the day Hollande spoke to the assembled negotiators — a day later than originally scheduled, after two days of non-stop negotiations on portions of the draft text delayed the delivery of the final draft text.

The final draft text to be delivered to the national negotiators was not yet ready for distribution by midday Dec. 12 in Paris, when Hollande first spoke to the jammed plenary session at Le Bourget conference centre near Paris.

The 31-page “Paris Agreement,” which is legally-binding, will:

• try to keep the world’s mean temperature rise “well below” 2 C and to limit that to 1.5 degrees above pre-industrial levels;

The 195-parties to the agreement will again meet in 2018 to discuss progress.

Also, in 2018, the Intergovernmental Panel on Climate Change will provide a special report on the projected impact of global warming that is limited to 1.5 C.

Fabius said the agreement, which contains all the “principal elements” that many wanted to see in the document, will “serve major causes, food security, public health, essential rights and ultimately, peace.”

Now adopted, the COP21 deal successfully ends eight years of talks on how to replace the 1997 Kyoto Protocol and accomplishes what Copenhagen’s COP15 conference in 2009 failed to achieve.

When at COP21 as a member of Canada’s official delegation, Nunavut Premier Peter Taptuna said that “climate change disproportionately affects the Arctic,” where temperatures are set to rise two to three times more than in the rest of the world.

The final agreement does include several mentions of Indigenous peoples and traditional knowledge, but these appear to be non-binding, with the preamble stating that “parties should, when taking action to address climate change, respect, promote and consider their respective obligations on human rights, the right to health, the rights of indigenous peoples…”

The World Wildlife Fund’s vice president of Climate Change, Lou Leonard, issued a statement Dec. 12 that was positive about the agreement, but said “our biggest concern at this point is that there’s currently no guarantee of assistance for those who will suffer the most from the impacts of climate change.”

And Maatalii Okalik, the president of the National Inuit Youth Council, who also went to Paris for COP21, said in a tweet that she was “very disappointed” with the final text.

Others have criticized the text of the Paris Agreement — even in its previous drafts — as being heavy on “aspiration and rhetoric” instead of action.

Kevin Anderson of the U.K.’s Tyndall Centre for climate change research, also said in a statement that the text is “not consistent with the latest science,” pointing to the absence of any references to aviation and shipping emissions, which also contribute to climate warming.

But the strongest criticism came from former NASA scientist James Hansen, who told the Guardian that COP21 is “a fraud really, a fake.”

“It’s just bullshit for them to say: ‘We’ll have a 2 C warming target and then try to do a little better every five years.’ It’s just worthless words. There is no action, just promises. As long as fossil fuels appear to be the cheapest fuels out there, they will be continued to be burned,” said Hansen, who has spoken out for action to curb emissions since the late 1980s. 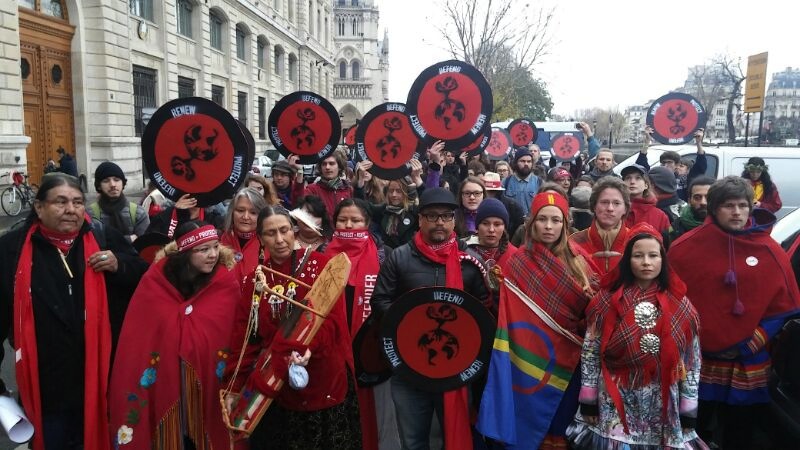