Baby suffered head injury after being thrown from mother’s lap 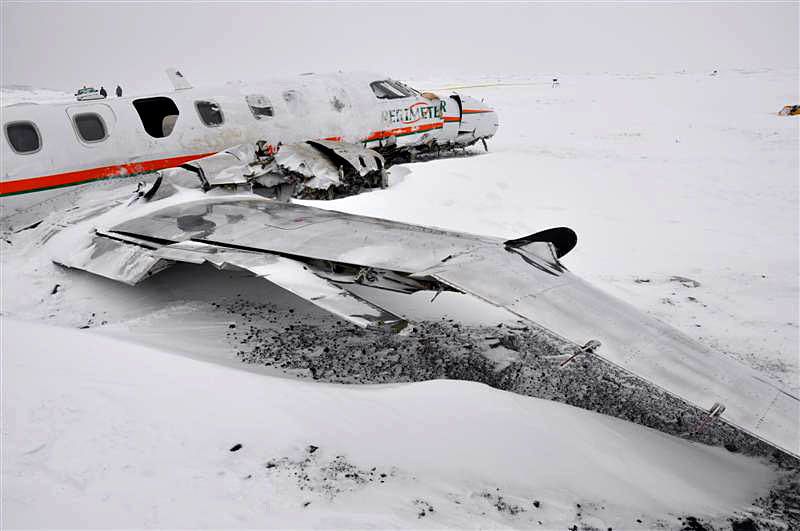 The Perimeter Aviation Metro 3 aircraft that crashed Dec. 22 near the end of the Sanikiluaq runway. Isaac Appaqaq, the six-month-old baby who died in the accident, was not strapped in with a seat belt, Nunavut’s chief coroner said Dec. 27. (PHOTO COURTESY OF THE RCMP)

Isaac Appaqaq, the six-month old baby who died Dec. 22 in a plane crash near Sanikiluaq, was held in his mother’s lap and not strapped into a seat belt, Nunavut’s chief coroner, Padma Suramala, said Dec. 27.

Surumala said the infant, who was thrown from his mother’s lap during the crash, suffered a “closed head injury” and other injuries and that an autopsy is not warranted.

The body was released to the family for a funeral service.

“On behalf of the Department of Justice, the Office of the Chief Coroner conveys our deepest sympathy to the family and friends and the Sanikiluaq community for their loss,” Suramala said.

Flight 671, operated by Perimeter Aviation LP under a charter agreement with sister company Keewatin Air, crashed at around 6 p.m. Dec. 22.

The plane departed Winnipeg at around 1:40 p.m. that day.

The Transportation Safety Board, which has started an investigation, said the plane’s flight crew crashed near the end of the Sanikiluaq runway after attempting a second landing in blowing snow.

Environment Canada shows no available weather information for that time in Sanikiluaq, but at 5 p.m., the agency’s weather service reported light snow, a temperature of 5 C, and winds from the north at 28 km/h gusting to 46.

The pilot and co-pilot were medevacked to Winnipeg to be treated for serious injuries, but they’re expected to recover.

The six surviving passengers were treated at the Sanikiluaq health centre for minor injuries and then released.

Two nurses have been flown in from Churchill to help staff at the health centre, and a mental health nurse is in the community to offer support, the Government of Nunavut said Dec. 23.