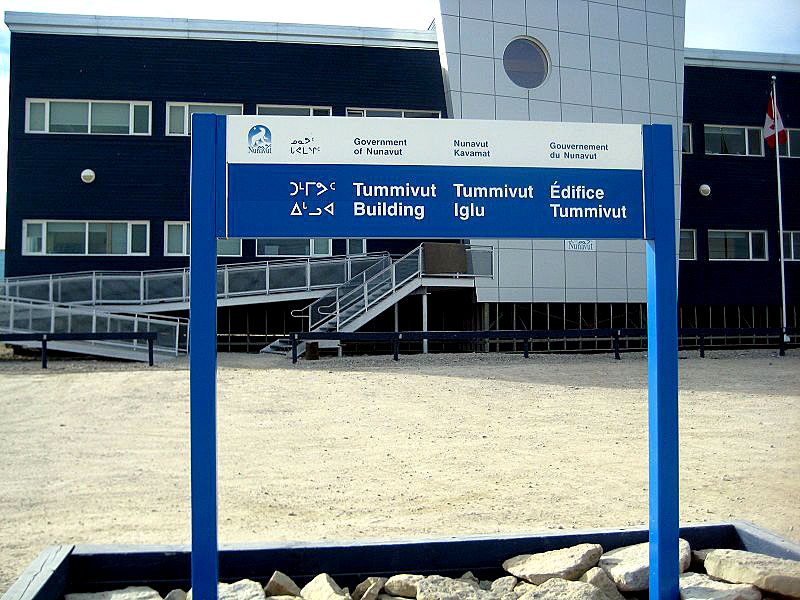 Work crews have removed and bagged soil contaminated by a slow diesel fuel leak around the Tummivut Building in Igloolik, which houses Government of Nunavut offices. (PHOTO FROM WIKIMEDIA COMMONS)

Work crews contracted by the Nunavut Construction Corp. are removing soil contaminated with diesel fuel from around the Tummivut government building in Igloolik, the community’s hamlet office said, following a leak in a fuel line that was discovered July 18.

They’re removing the soil where the fuel has accumulated in the ground,” said Brian Fleming, senior administrative officer for the hamlet. More that 200 sq. metres of contaminated soil were removed by Aug. 23, according to Nunavut’s environmental protection division of its department of environment, which regulates clean-ups in the territory.

Crews have bagged contaminated soils, which the hamlet will store at a fuel cache site near the airport for shipment out next summer, Fleming said.

The storage site is lined to prevent possible leakage from the containment bags, he said.

The spill does not pose a threat to hamlet residents and does not affect people who work in the building, said Kristi Lowe, environmental compliance manager with the department of environment.

NCC leases the two-storey facility to the Government of Nunavut, and is responsible for the cleanup. At least four government departments are located in the building, including culture and heritage, finance, human resources, and environment.

The leak was “reported by an oil burner mechanic who was doing some work on the property,” Lowe said Aug. 27. A damaged pipe that carries diesel fuel for heating from a storage tank to the interior was the source.

“What we think happened was somebody hit the above-ground storage tank,” Lowe said. A feeder pipe at a 90-degree elbow was bent and damaged by an impact.

“When that happened and who it was, we’re not sure,” she said.