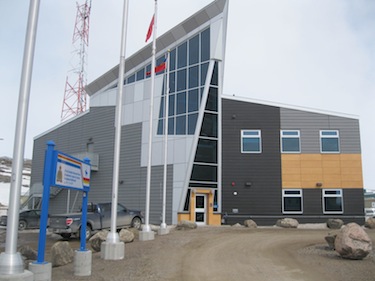 In an annual report given to Iqaluit City Council, the RCMP say the Iqaluit crime occurrence rate fell in 2016, but break-ins and other types of petty crime increased. (FILE PHOTO)

Crime is down, but the number of break-ins nearly doubled in Nunavut’s capital last year, according to an annual report that Iqaluit’s RCMP detachment filed with Iqaluit City Council.

That number includes decreases in several categories of crime, such as in arson—which fell by 64 per cent—firearms offenses, impaired driving and drug trafficking.

However, break-and-enter offences rose dramatically from 89 occurrences in 2015 to 163 last year, the report said.

The RCMP “V” Division media spokesperson, Sgt. David Lawson, said the increase was likely caused by a string of crimes committed by the same group of people.

“Iqaluit detachment was dealing with a small group of prolific offenders, which a good portion of these B&E’s were committed by,” Lawson said in a statement to Nunatsiaq News.

“Most of these offenders have since been charged and were remanded or are on conditions.”

The rise in petty crime may have spurred a call to create a neighbourhood watch in Iqaluit—brought up most recently in Nunavut’s legislature by Iqaluit-Sinaa MLA Paul Okalik after a string of tire slashing incidents was reported over the spring.

For its part, the RCMP said a citizen watch is possible, but its supporters can’t champion the cause by themselves.

“The detachment is open to the aspect of a neighbourhood watch,” Lawson said. “This process takes a bit of work by the neighbourhoods, such as criminal record checks, the willingness and commitment from the community, but it can be done.”

Last winter, Nunavut’s Qulliq Energy Corp. began a pilot project in Iqaluit to replace the city’s streetlights with brighter, long-lasting, LED lights, which may help cut down on mischief.

Lawson said that, as the fiscal year-end approaches, the Iqaluit RCMP will approach local stakeholders for input on priorities for law enforcement in the coming spring.

“This process involves consultations, reviewing statistics and issues in Iqaluit and setting priorities for the year, which may include domestic violence, youth, suicide prevention, property crime, etc,” he said.

A two-member “general investigative section,” recently established within the Iqaluit detachment, may allow more time for local officers to engage the community outside the scope of their duties, but Lawson added Iqaluit “continues to be one of the busiest detachments when it comes to file count per officer.”

Additional community engagement was one of the requests made by city councillors the last time the RCMP briefed the city in July last year.

Councillors will have another opportunity to present their concerns to the RCMP at the next city council meeting, scheduled for Feb. 14.

The RCMP report, which was to be spoken to at council’s last meeting, was deferred when no officer appeared for the scheduled visit.