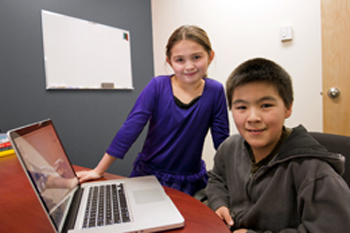 Will your children one day get access to quality broadband telecommunications that are available to most Canadians living in urban centres? The CRTC took a big step towards achieving that objective late last December, when they re-defined Canada’s universal basic telecommunications service objective as 50 Mbps download and 10 Mbps upload. They also said that the landline voice phone is a fading technology and the only medium that matters is broadband internet. (PHOTO COURTESY OF TAMAANI)

Just as Nunatsiaq News closed down for the seasonal holiday late last month, Canada’s telecommunications watchdog, the CRTC, declared Dec. 21 that no matter where they live, all Canadians must get access to fast high speed broadband internet speeds: 50 Mbps download and 10 Mbps upload.

The CRTC issued the ruling after Canada-wide consultations that started in 2015 and a public hearing held this past spring.

That process was aimed at re-defining Canada’s “basic service objective” under the Telecommunications Act—the minimum level of service that all Canadians must receive.

The old objective—deemed hopelessly obsolete by most stakeholders—said all telecom operators should offer touch-tone voice phone service, access to long distance and directory assistance, and low-speed internet, redefined in 2011 as 5 Mbps download and 1 Mbps upload.

But the CRTC’s new broadband targets are 10 times faster than the fastest offerings now available in Nunavut, where all telecommunications are delivered via satellite.

“We heard from Canadians that a download speed of 5 megabits per second and an upload speed of 1 megabit per second doesn’t cut it anymore. We heard that data caps often impede their capabilities in a data-hungry digital world,” Jean-Pierre Blais, chair of the CRTC, said at a press conference in Gatineau.

To subsidize the cost of offering faster broadband to rural and remote regions such as Nunavut, Nunavik and many northern and isolated sections of the provinces, the CRTC has ordered the creation of a new fund worth up to $750 million over five years.

That money—like an existing fund that subsidizes landline telephone service—would be raised through small surcharges on telecommunications firms.

The existing pot of money, called the National Contribution Fund, has been used since about 1999 to protect remote and rural consumers from having to pay the real economic cost of landline telephone service.

“We are in a day and age where everything is about broadband Internet,” the CRTC decision said.

That means the National Contribution Fund, worth about $100 million, will transition away from landline subsidies and go into a new fund aimed at subsidizing broadband.

In its first year, the fund would make $100 million available for broadband subsidies and rise to $200 million by its fifth year.

Ten per cent of that money would be allocated to satellite-dependent communities.

Meanwhile, the current regulatory regime that caps Northwestel’s prices will stay in place until Dec. 31, 2018.

SSi Micro Ltd., which offers internet in every Nunavut community through its Qiniq brand, is delighted with the CRTC’s announcement.

Proctor said more investments should be made in backbone infrastructure for satellite-based communities to create “open gateways” available to all players.

“Yesterday’s decision and the new USO ensure that will indeed happen,” Proctor said.

The CRTC said it will launch a follow-up process in early 2017 to work out the details of how the broadband fund will work, including how it will be governed and audited and how the money will be raised.

They did say the fund would be managed by arms-length, third-party administrators and overseen by a board of directors.

The CRTC also ordered that the latest LTE mobile wireless technology be made available not only to homes and businesses but also along major Canadian highways.