“It is something that has a lot of people worried” 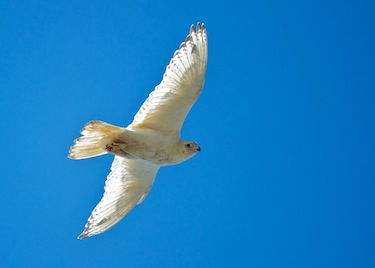 Gyrfalcons with wingspans as large as five feet, inhabit the Arctic from Alaska and Nunavut to Greenland and Norway and range in color from white, silver and grey to almost black. But the darker ones may eventually be more successful in surviving as snow cover diminishes in the Arctic. (PHOTO BY JEFF JOHNSON)

Anyone out hunting ptarmigan right now knows it’s getting to the time of year when the bird’s color starts changing from brown back to white. Maybe you’ve noticed that Arctic hares and Arctic foxes are also going through a similar colour change in late summer and early autumn.

This process is called moulting and its explanation seems like a no-brainer: when an animal’s world is snowy and white it’s better to blend in and be white, when their world is rocky and muddy it’s better to be brown.

But what happens to these animals, for example, when the ground remains brown well into the winter because there has been no snow, as occurred during the winter of 2010-2011 across much of Nunavut?

The answer, according to Dr. Jeff Johnson, a biologist who has been studying plumage characteristics in Arctic birds for more than a decade, may not be good.

“I think a lot of Arctic species are going to be affected by a changing climate,” said Johnson. “Whether or not an animal is plastic enough to change and cope with its changing environment is something we have to look at.”

Johnson’s research focuses on gyrfalcons, spectacular birds with wingspans as large as five feet, making them the world’s largest falcon. They inhabit the Arctic from Alaska and Nunavut to Greenland and Norway and range in color from white, silver and grey to almost black.

Johnson, working alongside Kurt Burnham, of the High Arctic Institute, an Illinois-based conservation group, has found that all shades of gyrfalcon exist at Kangerlussuaq, a site in southern Greenland, while at Thule, a site in the far north, the white form is dominant. White birds also tend to nest earlier and produce more offspring.

“Basically what this research suggests,” said Johnson, “is the environment is playing a role as far as regulating plumage color, at least in Greenland.”

“With a warmer and warmer climate that window of breeding is going to increase and possibly allow birds of darker plumage to be successful further north,” added Johnson. “And doing that would reduce in frequency the distribution of this really magnificent white form of gyrfalcon.”

Johnson and Burnham present results from their Greenland gyrfalcon work in a paper scheduled to appear in the January 2013 issue of the research journal Ibis.

It would not be the first time a changing environment had a direct effect on a species’ ability to camouflage itself.

In pre-Industrial Revolution England, the majority of peppered moths were light grey, which allowed them to blend in with the light-colored lichens that blanketed most trees. A black form of the moth existed but was much less common. But as coal-burning factories sprung up across the English countryside during the 19th century the lichens on trees died and their bark became black with soot. Light grey pepper moth numbers plummeted and populations of the black form exploded.

The changes occurring in Greenland may not be as drastic, at least not yet, but something is clearly happening to the environment.

“I can honestly say that in the ten years I’ve been working in Thule the Arctic is changing,” said Johnson. “I mean it is quite obvious, and whether or not these animals are able to adapt to this changing environment, we just don’t know.”

“It is something that has a lot of people worried,” he added.