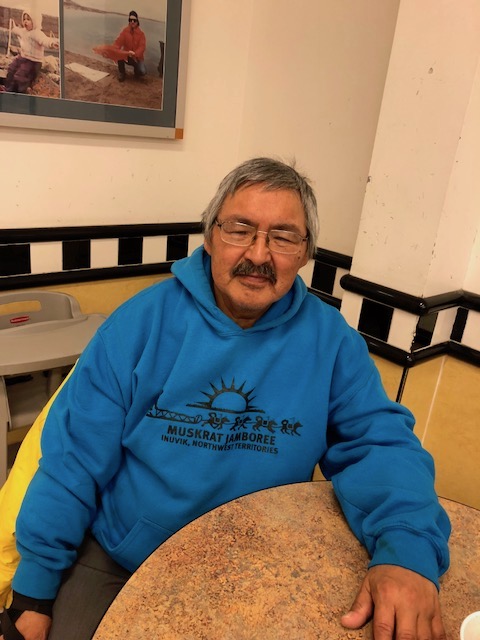 Grieving father Bobby Epikghout Ekpakohak sits in the Pizza Hut in Cambridge Bay with a coffee as he talks about his son, Adam, who died Sept. 24. (PHOTO BY JANE GEORGE)

CAMBRIDGE BAY—Five days after his son Adam’s death, Bobby Epikghout Ekpakohak sat at a table in the local Pizza Hut with a coffee.

As people came in, they greeted Ekpakohak, who stood up, hugged them and said Adam’s funeral would take place only when his son’s body came back into the community from the autopsy.

Fourteen-year-old Adam, a Grade 8 student at Kiilinik High school, died last Monday afternoon, after he had been found that morning, unresponsive, cold and intoxicated, in a cabin that he and two other teenagers had broken into.

The cabin lies beyond Mt. Pelly, about 20 kilometres from town, along a rough, unpaved road.

To get to the cabin, the teens drove over an even rougher access road in an all-terrain vehicle that did not belong to them.

No one reported the children missing over the weekend, according to multiple sources in the community.

At the cabin, the three teens, whose ATV was spotted Saturday night, are said to have spent their weekend drinking until the cabin owner arrived on Monday morning.

“He was a boy, kind, helpful—and also a brat,” said Ekpakohak, when asked about his recently deceased son.

“And he was hurting for a long time.”

Ekpakohak said he had been living in Alberta until last April, when he returned home to Cambridge Bay, now sober and with addictions counselling training, to help his son and other family members.

Ekpakohak said Adam was suicidal. He said that he had tried to seek help for his son.

“We did not get help. I went to youth protection and the RCMP to get help,” Ekpakohak said, adding that “now, that he’s gone, they want to help.”

Ekpakohak said he used to tell his son he loved him: “I love you, but I don’t want you to get hurt,” was what he said.

But he saw Adam using marijuana and shatter, an extremely potent form of cannabis concentrate.

Ekpakohak said he saw this happen, but said his son did not listen to either him or his mother.

Now, Ekpakohak said he hopes he and Adam’s mother, from whom he’s been separated for 12 years, do not bear the additional burden of accusations of bad parenting on their part.

He said he also hopes people in the community will forgive Adam for using drugs, drinking, taking the ATV and breaking into someone’s cabin.

Adam was just a boy, and it’s time for forgiveness, he said.

“This has been a tragedy, but it can be an eye-opener for the community,” which Ekpakohak called “dysfunctional.”

Adam’s death has left many shaken in Cambridge Bay, because they say the teen’s death could have been prevented.

“The reason that there is so much discussion in this community is that it’s tragic. It should not have happened. It could have been prevented at many stages,” Jim MacEachern, the hamlet liaison for search and rescue operations, told Nunatsiaq News.

He said he hopes the incident encourages the community to look at what they can learn and to see how they can improve the SAR process because “no one person or organization dropped the ball.”

MacEachern said he first learned at about 11:30 a.m. on Monday, Sept. 24, that there was a young person unconscious at a cabin.

A helicopter arrived at the cabin at around 2:30 p.m. the same day to bring the boy back to Cambridge Bay’s health centre, where Ekpakohak said health workers struggled to save Adam’s life.

His heart later stopped beating on a medical flight south.

Some suggest that there was an unnecessary delay in sending out a helicopter to retrieve Adam, who lay for three more hours in the cold cabin after the initial alert.

The RCMP said late Friday that the Cambridge Bay RCMP detachment responded to a complaint received early Monday about the teenagers, who appeared to be suffering from hypothermia.

In the RCMP release, no timeline to the response is provided, only that “the RCMP, along with the Cambridge Bay Health Centre, Cambridge Bay Ground Transport, Ground Search and Rescue and Canadian Base Operators coordinated an emergency response in which a helicopter was dispatched to the scene to transport any possible injured persons back to Cambridge Bay.”

The timing of the helicopter’s dispatch is not the only concern that is circulating in the community.

Others say police did not crack down on ATV thefts by youth this past summer, leaving the door open to such an incident.

Many also complain that bootleggers continue to supply alcohol openly to even the youngest members of the community.

One man said much of the town of about 1,700 was drunk last weekend, like the teens at the cabin—a common enough occurrence since the community’s “beer line” sales shut down some 30 years ago and people turned instead to hard liquor.

Due to Adam’s death, a planned consultation meeting on Nunavut’s Education Act was cancelled, as were several other events.

To help students deal with the incident, a counsellor from the Red Cross arrived in town on Friday.

It’s not the first time the Red Cross has sent someone to Cambridge Bay to help people deal with trauma caused by a tragic loss.

The police said the “investigation is continuing” into what they called the “sudden death.”

“Our thoughts are with the family at this time,” the RCMP said.

For his part, Ekpakohak wants to spread the message to other parents, that they need to face their problems, stop the cycle of addictions and abuse, listen to their kids and spend their money on food instead of drugs and alcohol.