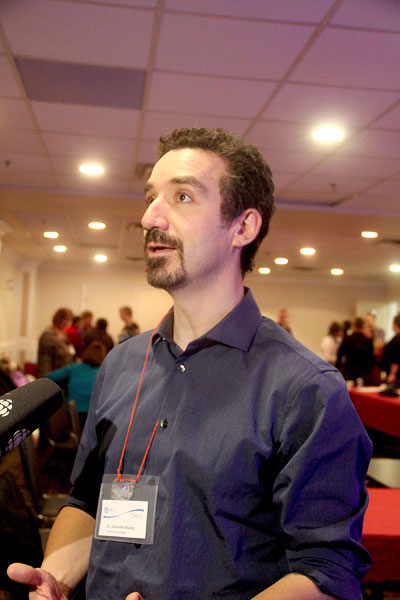 Dr. Gonzalo Alvarez of the University of Ottawa, who works on the Taima TB campaign, said a three-day forum on tuberculosis in Nunavut this week will lead to Nunavut-specific policies that will help prevent the spread of TB in the territory. (PHOTO BY SAMANTHA DAWSON)

The understaffing of health and medical services in Nunavut is just one of the issues under discussion at a three-day forum on tuberculosis at the Hotel Arctic in Iqaluit, Dr. Gonzalo Alvarez of the University of Ottawa said Jan. 30.

The purpose of the forum, which started Jan. 29, is to develop a “Nunavut-specific” TB policy by discussing tuberculosis prevention, treatment and staffing issues.

Medical professionals from Nunavut and Greenland are attending the forum.

Although the number of TB cases in Nunavut has gone down slightly, “we still have a lot of cases, so we thought we’d have this meeting now just to look at everything,” said Nunavut’s deputy chief medical officer of health, Dr. Maureen Baikie.

The rate of TB infections in Nunavut is 60 times higher than the rest of Canada.

“We’re basically discussing a range of topics that Dr. Baikie and her team will use in order to develop policy in Nunavut,” Alvarez said.

Some of the issues are being revisited “just to take a look and make sure.”

One big issue in treating TB in the North is the shortage of staff in the health department.

“That is sometimes a barrier in changing things and the way we approach them, but that’s what we’re doing [with our research],” Alvarez said.

He said his research is aimed at overcoming the barriers that exist in Nunavut, because what sometimes works in the south doesn’t necessarily work in the territory.

“Having messages in Inuktitut, making sure the messaging that we’re doing in Inuktitut are correct, using the oral Inuit tradition… to me that’s really important,” Alvarez said.

The history of TB in Nunavut is different than in the South as well, he said.

“Many people here in the 1950’s and ‘60s when they got diagnosed with tuberculosis, they got picked up by a ship that used to come up here and they had to go to sanatoriums in Toronto and Hamilton,” Alvarez said.

That created a stigma around the disease.

People needed to realize that TB is treatable here in Nunavut, Alvarez said.

“We’ve integrated the use of elders, to ask them to come and tell us their stories about tuberculosis, again trying to foster the Inuit oral history and it’s an incredible thing for someone who’s gone through it tell you that they went down south and forgot their language,” he said.

Most cases of TB are seen in young adults between 18 and 35 years old.

The delegates at the TB forum also looked at Nunavut’s Taima TB campaign, which has been running for almost two years now.

“The other thing that’s come from the Taima TB project is the parenting and youth initiatives last February… people asked why is the program only happening in Iqaluit,” Alvarez said.

He recently spent two weeks in Clyde River and one in Pangnirtung to spread awareness about TB.

“We used that to do a youth initiative, where we went to youth centres and kids made videos about the five facts of TB [from the campaign], it was really just fun activities and at the same time learning about your health,” he said.

“It’s a lot more than just getting a vaccine,” Alvarez added.

The chief medical officer from Greenland, Dr. Flemming Stenz, said there are high rates of TB in Greenland.

“Nunavut and Greenland are very similar,” he said.

To him, the forum is “more a way of discussing strategies, discussing it is very important.”

In Greenland, cases of TB are also highest in young adults from 18 to 35.