Does chamber of mines VP represent the culture of the mining industry? 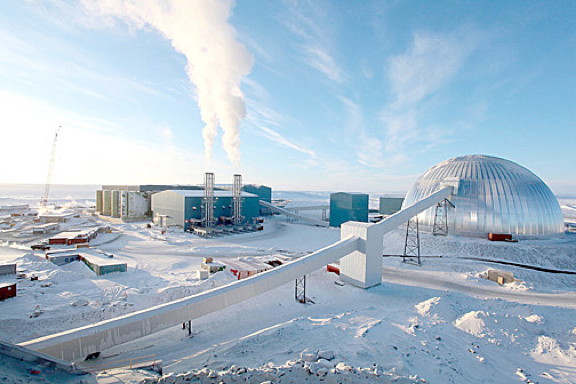 A view of Agnico Eagle’s Meadowbank mine in 2010.

The irony of a man appearing to attempt to shame a woman who testified at the MMIWG inquiry in a public forum like Nunatsiaq News would almost be laughable, if it weren’t for the real-life implications those sorts of tactics, by men, have on women.

Our minds instantly think about the safety and security of ourselves and our families—financial, physical, mental and emotional. By taking unnecessary jabs at TJ Lightfoot, I can’t tell if Alex Buchan is representing or misrepresenting the mining industry because, despite what he states in his letter, there is empirical data that backs up the fact that man-camps overwhelmingly impact Indigenous women.

The social impacts of the resource extraction industry on rural and Indigenous communities are well-documented.

Buchan could have written his letter and rebutted the testimony given, without mentioning the names of the expert witnesses, but he did and that set the tone for his letter. Alex is attempting to shame a woman who is actively working to end violence against women and to help solve the crisis of missing and murdered Indigenous women and girls.

If it only represents Alex Buchan’s ideas of how women should be treated, then I ask how the chamber of mines will proceed with ensuring that women are not devalued in the mining camps? If it does actually represent the culture of the chamber of mines and the mines they represent, I ask how they will address this culture and how do they intend to move forward to make sure that women are valued and made to be safe while working for and with the mines, or living near the mines?

The chamber of mines may not have been invited to provide testimony at the inquiry, but neither was I. I still attended though, because I truly care about the well-being of Indigenous women, girls and LGBTQ2S people who are over-represented in abductions and death by murder in Canada and the United States.

Because I attended, unlike Alex Buchan, I can tell you that TJ Lightfoot never claimed to be an expert on mining in Nunavut based on their current job, but based on their volunteer work, previous job experience as well as their graduate studies in environmental policy, TJ was sworn in as a person with lived experience relevant to the panel discussion, which was “Decolonizing Perspectives,” and in part, touched on the impacts of resource extraction.

TJ asked that it be put on the record that they were not there representing the organization or work that they were currently in, as Alex wrote “youth services worker.” If Alex had attended the inquiry, he would have known this.

The letter from Alex doesn’t only serve to refute the testimony given by TJ at the MMIWG inquiry, but it also serves to pit TJ against other women. Those of us who attended understood TJ’s comments about the positions in mines that women primarily occupy.

TJ was stating a fact, which is backed up by the Pauktuutit report, “The Impacts of Resource Extraction on Inuit Women and Families in Qamani’tuaq, Nunavut Territory.”

Lightfoot’s statement had no judgment about the work that women were doing in mines; it only served to provide context. There was no job-shaming at all, which Alex’s letter implies. This can be understood by watching the testimony or reading the transcripts when the MMIWG commission makes them available.

I am baffled that a prominent organization would make statements like, “the inaccurate testimony provided to the national inquiry was a missed opportunity,” when Alex’s letter is entirely based on a news article and not actual first-hand accounts.

It is irresponsible and unprofessional for an organization to represent themselves this way. Taking quotes out of context and writing an open letter about a person is sloppy, which is a curious approach to interacting with a national commission whose mission you claim to care about.

By means of this letter, I hope to set the record straight and ask Alex Buchan and the N.W.T. and Nunavut Chamber of Mines to provide details that back up the statements:

“Nunavut mines are actually leading the way in our territory in respecting and supporting Inuit women.”

“Women are an order of magnitude safer at our mines than at home.”

“We are focused on crime prevention.”

If you can’t honestly back these statements up, then I implore you to understand that the realities for Indigenous women working in mines and living near mines are different than the realities of their male counterparts and work to change that. After all, making the lives of Indigenous women and girls safer is the goal of the MMIWG inquiry.