Down to the sea in ships: Nunavut trainees learn about maritime jobs

“I can see myself working on a boat like this” 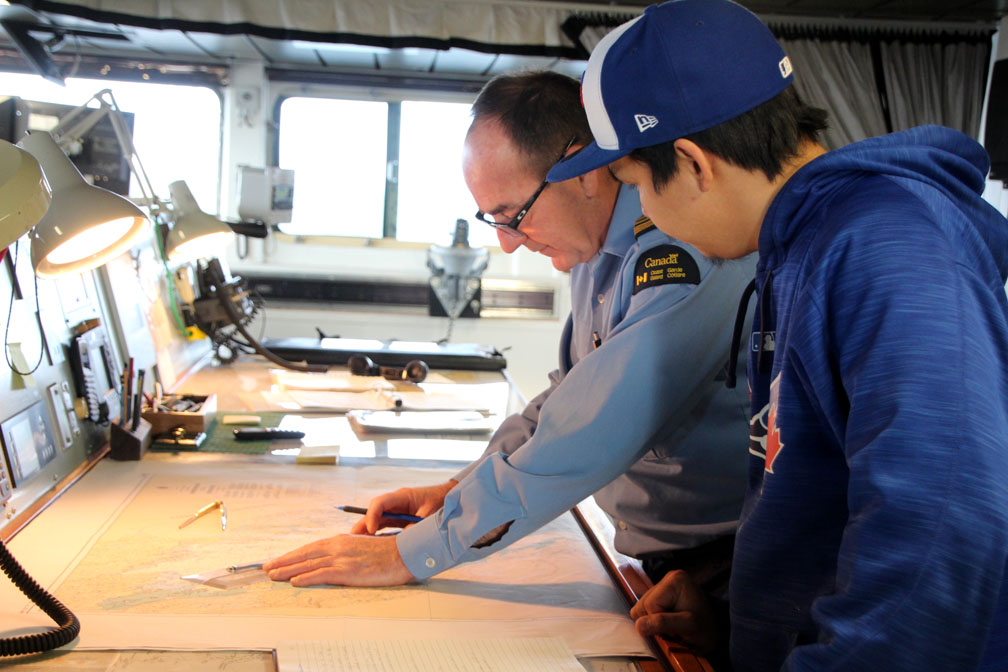 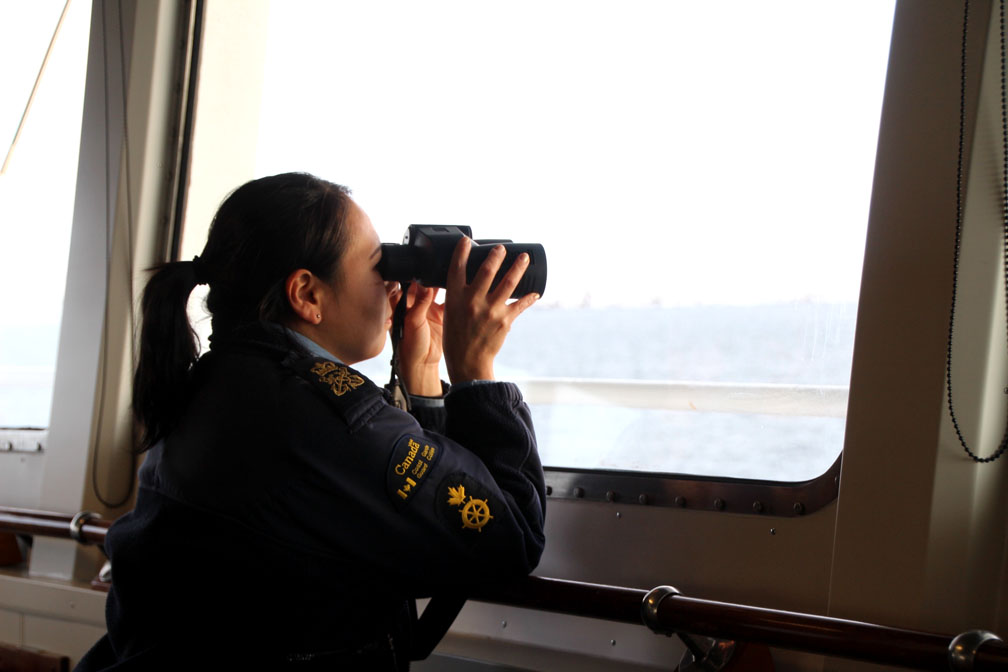 Yvonne Nochasak, a crew member from Nain, Nunatsiavut, does her job as quartermaster, keeping watch on the bridge. (PHOTO BY BETH BROWN) 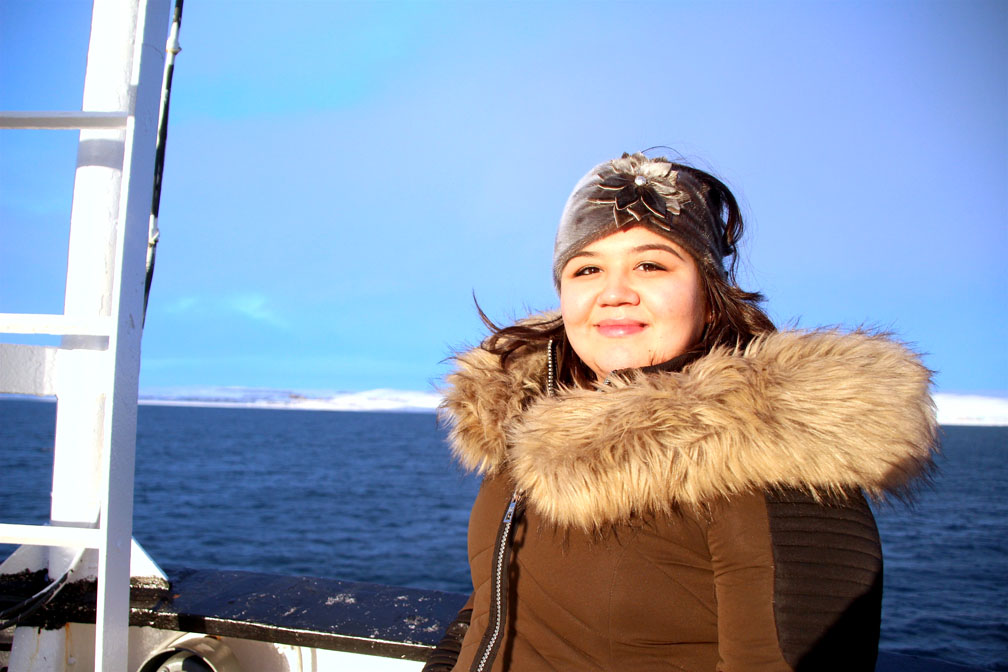 Kerry Ningeocheak of Coral Harbour enjoys a bit of sunshine near the bow of the CCGS Henry Larsen near the end of her day-long tour. If she is hired to work for the Coast Guard, she says she could act as a translator during community visits to the North. (PHOTO BY BETH BROWN)

A bell chimes six times on the bow of the Canadian Coast Guard Ship Henry Larsen, as the crew weighs anchor in Frobisher Bay.

Each chime marks a shot, or 27.4 metres of chain link, indicated by a swatch of chipped red paint that prompts the ringing brass bell.

It takes over 10 minutes for the hydraulic hoist to raise the anchor up from the bottom of the bay and tuck all that chain down into a hold below deck.

For the crew of the 100-metre-long icebreaker, it’s just another day at work.

But for a gathered audience of 11 student mariners, it’s a fascinating first-time experience.

“We were just learning about all the chains this week … actually seeing it gives you a different perspective,” said Sam Aningmiuq, a student at the Nunavut Fisheries and Marine Training Consortium in Iqaluit.

The students are nearing the end of a three-month course that will leave them qualified to work as deck hands on oil tankers, cargo ships, research vessels or for the Canadian Coast Guard.

The program is classroom based, with sea time supplemented through state-of-the-art simulators at the training school.

But last Friday, students were lucky enough to test their sea legs for real during a day trip on board the CCGS Henry Larsen.

That included transit to the ship in a helicopter—another first-time experience for most. Once safely on board, the group was given a full tour of the ship, with detailed explanations of how safety drills are done, how lifeboats are launched, and so on.

The day also saw a full lunch of fish and chips and a tour of the engine room where earplugs were a must for muffling the loud whir of the ship’s three 16-cylinder engines.

Students also checked out the forepeak of the ship, near the front, where the boatswain and deck crew showed them the ropes—literally—as well as levers and straps used to secure large equipment on board.

“It’s cool being here, I’m really glad we got the opportunity,” said Aningmiuq. “I’m torn between going to the Coast Guard or fisheries now. I can see myself working on a boat like this.”

Aningmiuq, who grew up in Cape Dorset, moved to Iqaluit from Ottawa, where he had been working at one point for Tungasuvvingat Inuit.

“I’ve been jumping from job to job, and this seemed like an actual career,” he said.

Two students from previous classes at the Nunavut Fisheries and Marine Training Consortium worked on board the Henry Larsen earlier this summer.

“You could spend a month in the classroom explaining things … but when they come here and see it, then it becomes real,” said course instructor Peter Richards.

Richards spent his career on oil tankers and dive-support vessels, retiring as a captain after years spent travelling the globe.

Hailing from Newfoundland, he said he is seeing a change in marine trades here in Nunavut, similar to what he saw at home during the dawn of the offshore fishing industry there.

“When the offshore started in Newfoundland it was run by Brits, Norwegians and Americans,” he said. “Then the government stepped in and said, ‘You have to hire local people.’”

After two decades of recruitment and training efforts, “now, in offshore Newfoundland, you’d be hard pressed to find anybody who is not from Newfoundland, top to bottom.”

That can happen in Nunavut too, Richards said, and the marine school is working to hasten the process.

“If you’re going to exploit the resources here you’ve got to hire local … they need the opportunity.”

For Neil MacDonald, commander on board the Henry Larsen, working with Nunavummiut is all part of doing his job right.

“I made it my personal goal to reach out to community groups while I’m up here,” MacDonald said. “My goal is to get everyone involved, to do more training and to engage the people.”

And students were definitely engaged as they wandered through the bridge of the ship, learning about navigation and nautical charts and taking a turn at the wheel—which is one job they could end up doing full-time if the Coast Guard were to hire them.

“A ship like this is not quick to respond … it can be difficult to stop too. It’s just getting the feel of handling a bigger vessel,” MacDonald said.

Watch-keeping is another bridge-based job, and on this day it was being done by leading seaman Yvonne Nochasak, a crew member from Nain, Labrador.

“It’s always good to see students on the ships who are interested in learning about marine life,” said Nochasak, who has been with the Coast Guard for 11 years.

She said the travel opportunities in the job are eye-opening, and “the small team and environment teach you to work with other people and see other perspectives … it’s like your second family on the ship.”

Not to mention, “you appreciate stuff on land when you get back from sea,” she said.

After meeting Nochasak, and being ferried around the ship by two female navigation cadets and shown the engine room by a female first engineer, one more take-away from the day was that a career with the Coast Guard is accessible to both men and women.

“It gives women encouragement when you see another woman working in a male-dominant environment,” Nochasak said. “There is opportunity out there for women.”

For Kerry Ningeocheak of Coral Harbour, this was good news.

She applied for the marine training program because she was interested in working in fisheries, but was told that most companies in Nunavut won’t hire women to work on offshore fishing vessels.

But that wasn’t going to stop her from getting trained and finding a new job.

“Usually there are more men [than women] but that’s changing and I want to be a part of that change.”

“It was an amazing experience, it was more than what I expected. We’ve seen pictures of the equipment they have here but I didn’t know it would be that big,” she said, adding that it was a pleasure to meet Yvonne Nochasak during the bridge tour.

“She seems to really enjoy it. She’s a motivation to me,” Ningeocheak said.

“We have a lot of young women in the courses now, and it’s an excellent opportunity for them,” said marine school director Randy Pittman.

But he said there’s one catch for northerners applying for work with the Coast Guard: the high cost of airfare.

Coast Guard crews work on rotations, meaning they might be on duty for six weeks and then off for the next six weeks.

But in order to fly home and be with their families during their off time, employees would have to front their own travel costs.

Northern flight prices make an otherwise well-paying federal job with a pension and benefits look a little less desirable, Pittman said, adding that he is in talks with the Coast Guard to find a solution to this problem.

The students on the tour were part of the consortium’s Kisarvik program, which is an employment training program developed by the college in partnership with the Government of Nunavut’s Department of Family Services. The program is for youth aged 18 to 30 who are looking to upgrade their education and career skills and who may have faced barriers to education or employment in the past.

“A lot of the certificates they get are transferable,” Pittman said. “We don’t really care if they go to work in the marine industry. They develop self-confidence and the skills that they need to go to work.”

As for the day trip, Pittman said it’s a rare opportunity for students at his school to get on board a large ship.

“We’ve got a bridge simulator and the latest and greatest equipment, but the real thing? There’s no substitute for that,” he said.

It was clear that the students agreed when, back on the bow, they leaned keenly over the rails to watch the anchor surface at the side of the ship, and later, when they snapped a few final selfies with their smartphones during the quick flight back to shore.

The Henry Larsen was the last icebreaker left in the Canadian North, and was finishing one last job near Iqaluit before closing up the ice season and heading south. MacDonald said the Henry Larsen was to be expected back in St. John’s, Nfld., by Nov. 24.