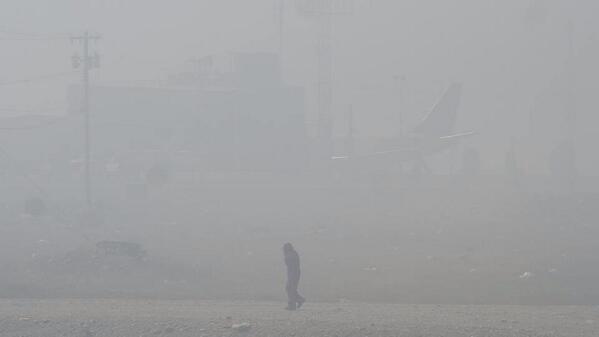 Johnny A. Ugjuk snapped this photo of someone walking past the airport in Rankin Inlet June 25 after a change in wind direction sent smoke from the nearby dump fire over that part of town, severely reducing visibility. (PHOTO BY JOHNNY A UGJUK)

Firefighters and hamlet workers remain on the scene of Rankin Inlet’s landfill, where a major fire has been burning since June 24.

On June 26, municipal officials said that about half of the landfill fire has been contained.

“The fire crew have done a great job in containing a good portion of the left side of the dump,” said Rankin Inlet’s deputy mayor, Sam Tutanuak. “There [has] been good progress in containing that area.”

But most of the impact of the fire on the community has been the smoke it produces.

A change in wind mid-day June 25 sent thick smoke through a residential part of town as well as over the airport.

Although the airport and airstrip remained open to traffic, both First Air and Calm Air cancelled a number of their evening flights June 25, due to poor visibility.

A June 25 public service announcement from the Government of Nunavut’s health department cautioned residents to minimize their exposure to the smoke by staying indoors as much as possible, with windows and doors kept shut.

The hamlet also opened the Singittuq arena for residents who were affected by the smoke.

The GN advised resident to watch for wheezing, shortness of breath, tightness in the chest, light headedness and dizziness. The smoke may also be irritating to the eyes, nose and throat and may cause nausea.

But the health department said there shouldn’t be any long-term risks from the dump fire smoke if exposure is short-term.

Tutanuak said that hamlet workers have installed a three inch wide line connecting the landfill to a nearby manhole, to allow firefighters easy access to the town’s water supply.