Education should be cornerstone of Arctic policy: Mary Simon 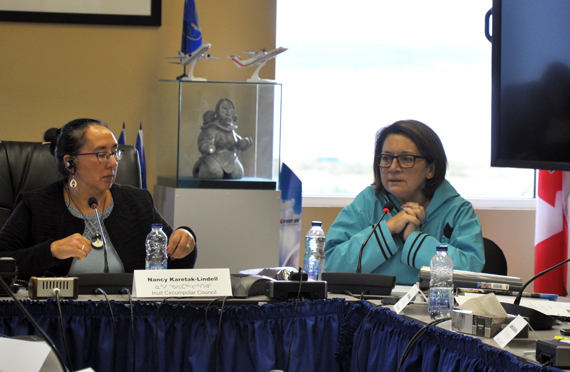 While Simon, special ministerial advisor on Arctic issues for Indigenous and Northern Affairs Minister Carolyn Bennett, devoted her interim report largely to conservation, her final report reflects the many social and economic priorities she heard from northern governments and Indigenous groups.

Over the last eight months, Simon sat in on 65 meetings, spoke to 170 northerners and read 34 submissions as part of her appointment.

She said those discussions usually returned to a key goal: the desire to nurture healthy and educated people.

To that end, Simon calls on the federal government to make education the cornerstone of its Arctic Policy Framework.

And that means commitments to programming for the youngest learners, Simon said, recommending increased funding for early childhood education programs in Arctic communities.

And Simon issued a clear call for an Arctic university, recommending the federal government announce “its intent” to create such an institution and set up a task force to build a vision and business case.

Simon said education policy in the Arctic at all levels should strive to be culturally-relevant, adaptive and flexible.

“The Arctic will need like-minded supporters, informed policy specialists, proactive educators and committed leaders, and significant investment to make this happen,” Simon wrote in her report.

“Improving educational outcomes in the Arctic and supporting Indigenous languages to survive and thrive after years of destructive education policy is, at its core, the highest test of nation building.”

Simon also made recommendations in many other areas.

On research and Indigenous knowledge, Simon lauded the creation of the Canadian High Arctic Research Station, set to open in Cambridge Bay this summer.

She said the facility is an opportunity to showcase Indigenous knowledge, recommending that CHARS host a centre for Indigenous and Local Knowledge.

But Simon said she is disappointed that Polar Knowledge Canada decided to drop the healthy communities theme from its 2016-2019 research plan.

She recommended that the organization include that theme in its research priorities and ensure that appointments to its board of directors are “inclusive and representative of Arctic peoples;”

And on infrastructure, Simon called on the federal government to work with Arctic governments and Indigenous leadership to develop an infrastructure catch-up program, one “that corrects for the punitive nature of per capita allocations without base funding.”

Broadband internet access should factor into that discussion, she said, recommending Arctic broadband be considered ‘national infrastructure’ under the Building Canada Fund.

Simon also said Ottawa should look to a 2011 Arctic Communications Infrastructure Assessment Report, which also called for a national strategy.

And on housing, Simon pointed the government to the findings of the Senate Standing Committee Report on Housing in Inuit Nunangat, which suggested a long-term funding strategy for the Arctic.

She also recommended a more Indigenous approach to the design and construction of homes in those communities.

In “A New Shared Arctic Leadership Model,” Simon expanded her ideas on conservation in the Arctic, first highlighted in her interim report.

That’s where Simon pitched the idea of a new conservation concept: Indigenous Protected Areas, jointly-managed by Indigenous peoples and groups “to support and accommodate [their] interests.”

Simon recommends Ottawa work with Indigenous groups to set out a process for how it would work, starting with the identification, funding and management of those protected areas.

She even suggested a potential candidate, the North Water Polynya, and recommended the federal government accept the Pikialasorsuaq Commission’s idea to create an Inuit-led management plan to oversee the region.

Over her many months of consulting with northern leaders and groups, Simon said she sensed disillusionment and distrust among many people she spoke to.

“It was disappointing to see that, even with the great deal of progress in the Arctic that I have previously described, a strong relationship with the Crown is still in its infancy,” she said.

Developing a new Arctic Policy Framework must then start with a mutually respectful and inclusive process, Simon said, pointing to the recent creation of a new Inuit-to-Crown working policy group.

“[That], in my view, is an example of how transformative policy begins with doing things differently,” she said. “The success of this new Inuit-Crown partnership will be measured by the actions that impact the day-to-day lives of Inuit.”

You can read Simon’s full report and recommendations here.