Eight is enough: Nunavut capital back to full strength

All male council, and female mayor, get back to work after byelection 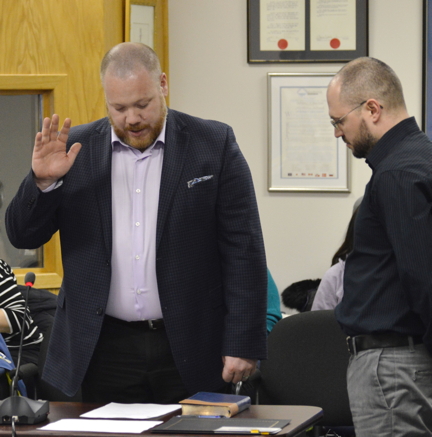 Iqaluit Coun. Kyle Sheppard swears his oath of office April 25. He was elected to council in a byelection April 10. (PHOTOS BY STEVE DUCHARME) 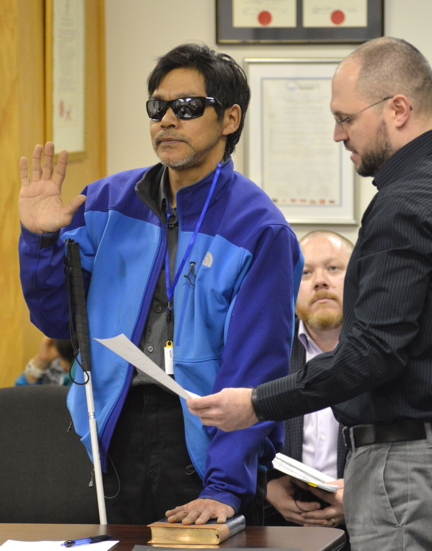 Iqaluit’s city council is ready to get back to work with a full membership for the first time in nearly a year, following a swearing-in ceremony for two new councillors elected in a recent byelection.

Kyle Sheppard and Noah Papatsie raised their hands and took their oaths of office shortly before a regular council meeting, April 25.

And while the workload was light in the meeting that followed, both councillors will have their jobs cut out ahead of them getting up to speed on city issues in orientations scheduled for next week.

Both new councillors will also have an opportunity to review and submit their own ideas for the city’s yet-to-be-released strategic plan, Iqaluit Mayor Madeleine Redfern, told council.

“We must work to share that strategic plan with the community as we committed,” Redfern said.

Many councillors expressed their excitement at getting back to a full complement in chambers.

“We were struggling a bit, especially myself,” Akumalik said in a light-hearted reference to his current monopoly on committee chairs.

Following the swearing in ceremony, Coun. Jason Rochon resigned his position as chair of the city’s disabilities committee—a position that Papatsie held when he served as councillor under former mayor Mary Wilman.

“Much better to have eight voices around the table,” Deputy Mayor Romeyn Stevenson said after welcoming the new councillors.

Coun. Simon Nattaq acknowledged the lack of female voices—with the exception of the mayor—around the table.

“Its not healthy if its all males sittings around, but hopefully we will iron out that challenge,” he said through a translator.

Both Papatsie and Sheppard told Nunatsiaq News during a break that they are looking forward to getting down to work, but refrained from identifying any specific policy priorities before they had a chance to review city files.

City council’s next regular meeting is scheduled for May 9. 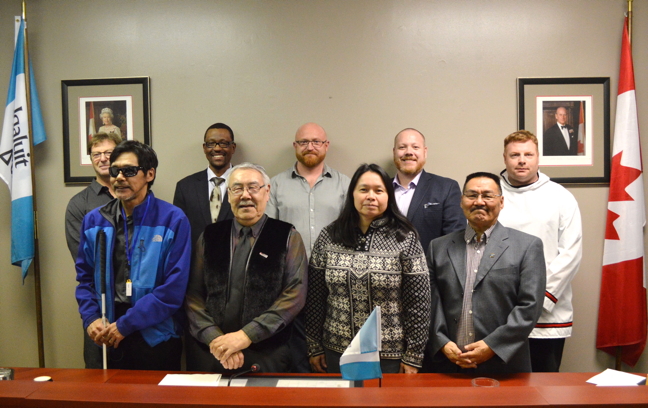