Teamwork, strength and humility — all part of being an acrobat 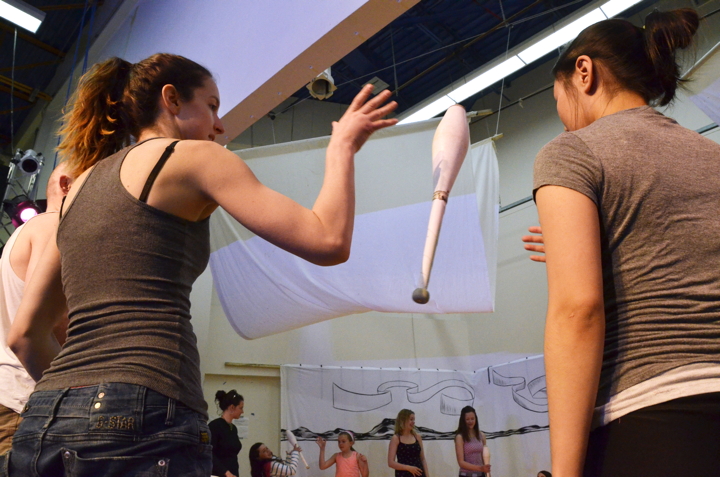 A baton is passed around in a circle at a free Artcirq workshop June 29 at Nakasuk School in Iqaluit. (PHOTO BY DAVID MURPHY) 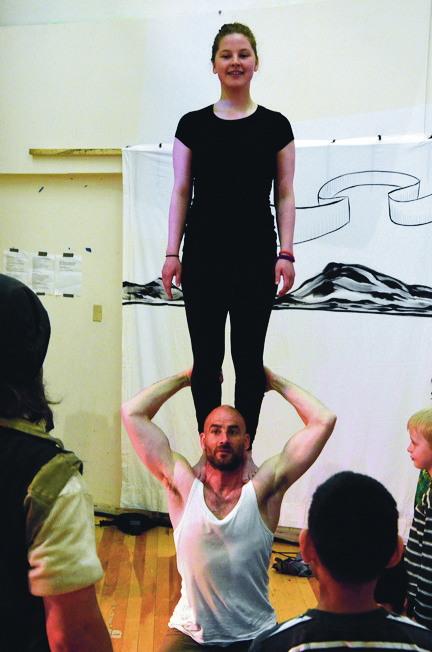 Guillaume Saladin, performer, trainer and co-founder of Artcirq — Igloolik’s travelling acrobatic circus clan — holds a participant from the June 29 circus workshop on his shoulders at Nakasuk School in Iqaluit. (PHOTO BY DAVID MURPHY)

When a group of about 25 first-time circus performers gather in a circle and try tossing a baton around, it’s bound to hit the floor a few times.

“It’s never one person’s fault,” Saladin tells the group. “We all make the mistake.”

Teamwork is just one of the vital skills Saladin conveyed to the group at a free circus and acrobatics workshop at Nakasuk gym June 29, the day after Artcirq performed for a sold-out crowd on the same stage.

“Circus is almost like a martial art,” Saladin said.

You need to be aware of your body and mind. But you also need to trust the team around you, he said.

“It’s not a selfish activity. It’s very much related to the group. You need the other to be strong in yourself,” Saladin said.

And mistakes happen. When the batons are put away and the juggling balls come out, at least one ball rolls off the stage every five minutes. Occupational hazard.

“The worst that can happen on stage is: you make a mistake, and the other performer makes you feel you made the mistake,” he said.

“Then you just feel horrible.”

Mistakes are inevitable, and Arctirq performers even made a few on stage June 29. But that doesn’t diminish the spectacle, Saladin said.

“As a crowd, you also want to see the weakness. We are not superhuman. We’re just people,” he said.

Artcirq performed a new show at the Alianait Arts Festival called Asiu, inspired by the animated film, Amaqqut Nunaat: The Country of Wolves.

The story follows a pair of men on a trip out onto the land, where they encounter dangerous wildlife and strange folk.

Jimmy Qamukaq was one of the performers on stage — he’s the one who climbed on the back of a polar bear.

“This one was really different from the last show,” Qamukaq said.

Qamukaq has been a member of Artcirq for a decade now. He also performed at the Vancouver Winter Olympics in 2010 inside B.C. Place. Despite his skill and experience, he still finds the new routine difficult to master.

“It seems like we’re used to all the techniques for this year, it’s been pretty challenging. And it’s good to learn new moves.”

The show wowed the audience, including Anita Robertson. She brought her two sons to the workshop after seeing the performance the day before.

“They were really, really interested. So we wanted to try it out,” Robertson said.

Nine-year-old Declan Robertson recapped what he learned after the workshop.

“Some important things in acrobatics is balance, trust and … fear,” he said. “Fear, it keeps you alert and awake.”

“It was amazing! It was awesome.”

Saladin says he wants more of this interaction with the community, rather than just in-and-out concert experiences.

“Because just going into the community to perform and leave, the impact is not as full as if we had the chance to talk with everyone after and make them feel what we feel on stage,” Saladin said.

The overall message Saladin wanted the kids to take home is that every skill takes time to master.

“Just take time to start, from A-to-Z, and you’re going to make it.” 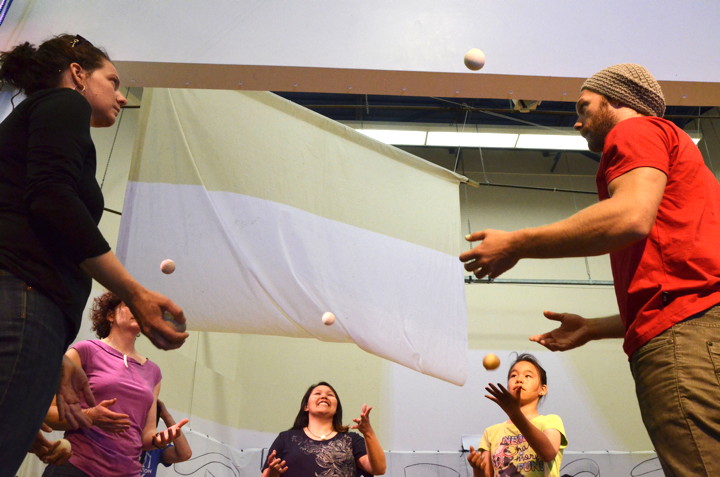 Participants at a free June 29 circus workshop at Nakasuk School try to keep the balls in the air. (PHOTO BY DAVID MURPHY