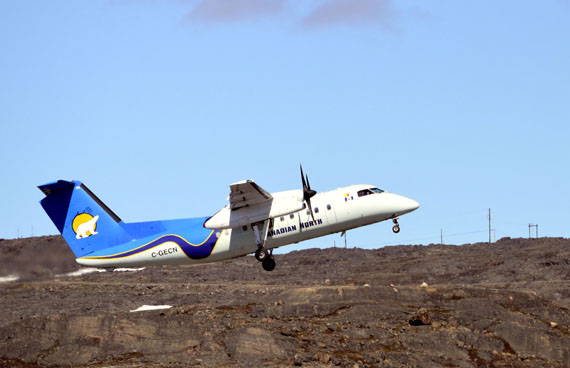 A Canadian North Dash 8, like this one pictured taking off from Iqaluit last year, experienced engine failure on a scheduled flight in the Kitikmeot region earlier this week. (FILE PHOTO)

A Canadian North Dash-8 made an emergency landing in Taloyoak July 28 after one of the aircraft’s two engines failed.

The incident took place on flight 8578 during a scheduled route between the western Nunavut communities of Kugaaruk and Taloyoak.

The crew aboard the plane declared an emergency about 70 kilometres from Taloyoak, said Graeme Burns, a spokesperson for Canadian North.

The aircraft continued with one engine and landed safely in Taloyoak with 14 passengers and three crew members on board, Burns said.

The airline says a faulty sensor line was responsible for the engine failure. The line was replaced by Canadian North maintenance staff and Transport Canada and the Transportation Safety Board cleared the aircraft to fly.

Nine passengers headed for Cambridge Bay and points beyond were put up in a hotel overnight until the plane departed the following day, July 29, at its regular departure time.