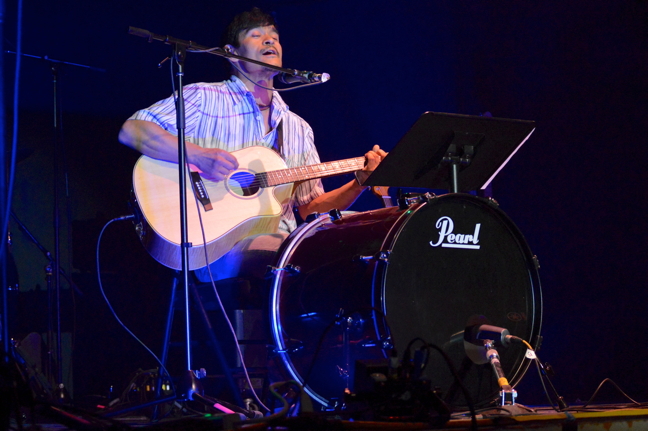 When Jordan Muckpa walked across Iqaluit’s Nakasuk School stage in front of a standing room-only crowd for Alianait’s National Aboriginal Day concert June 21 in Iqaluit, he says he was ready.

But he admits he was very nervous.

And it wasn’t just because Muckpa was appearing on the same bill as perennial mainstays of northern music: Looee Arreak, The Daniel Kolola Band and the Inuksuk Drum Dancers. It was bigger than that.

As he sat behind a large kick drum and music stand which nearly hid him from the audience, Muckpa was settling down for his first ever live performance as a recording artist.

In front of hundreds of people — that’s one heck of a first gig.

Looking back on that night, the 37-year-old says he’s thankful the bright stage lighting prevented him from seeing the hundreds of Iqalungmiut in the audience.

“I found a way not to look at anyone,” he said with a laugh.

But the caliber of music from this first-time performer leaves little room for humility.

His debut album, entitled Maanna, teems with atmosphere — the product of Muckpa’s unique blend of folk, grunge and blues set over Inuktitut lyrics.

And “Takuyumanngitagit,” an experimental piece, merges Muckpa’s multi-layered vocals over a jangly acoustic guitar, steering the listener to images of wide-open spaces and adventure.

Muckpa credits his variety of musical styles and tastes to one source: his father.

“When I was a boy, my father used to listen to Pink Floyd mainly and some other songs that the town didn’t listen to back then,” he said.

“He was working at the mine, and I guess made friends and got songs that he liked from them. He used to always listen to music… It stuck in my mind. It’s like a fingerprint.

“I mixed it with what I can do,” he said on his unique fusing of styles.

A self-taught musician from the age of 16, Muckpa didn’t own a guitar until 2012, when he purchased a $50 Mansfield acoustic and some strings.

He admits his interest in music was never consistent — and certainly not a career choice.

“I didn’t play all the time,” he said, adding that time spent writing music was “very scattered.”

Which makes the circumstances surrounding Muckpa’s first album that much more impressive.

Earlier this year, Muckpa sought grant money from the Government of Nunavut — but not for what you’d think.

“I went into that office and asked to get a grant for carving tools and we ended up talking about music somehow,” he explained.

“It just happened,” he said, adding he never thought his style of singing and playing would lend itself well to recording.

“Its kind of a scary thing to do because I’m not a professional.”

Muckpa says much of his song lyrics explore redemption, reflection and hope for better days to come.

“Some of them are saying ‘sorry.’ In my own language ‘forgive me.’ Other’s are saying ‘If I angered you, my people, God’s people, I’m sorry’,” he explained.

But Muckpa insists that those lyrics are not meant to be selfish.

“My music is created by everyone around,” he said, about his hometown of Arctic Bay.

“If it wasn’t for everyone… it wouldn’t be possible to do that. [These] creations of mine are designed to help out.”

As for the next step, Muckpa says he’s excited to start work on his next album and perhaps bring in additional musicians.

“I want to get a band, but it’s very expensive.”

But he’s already overcome the first big hurdle in releasing his album. Muckpa says that gives him confidence to continue.

“Actually it was kind of acceptable,” he said, of the final product.

To hear a sample of Jordan Muckpa’s music, visit his YouTube page here.