“On this day of mourning, let’s mourn the dead, but fight for the living” 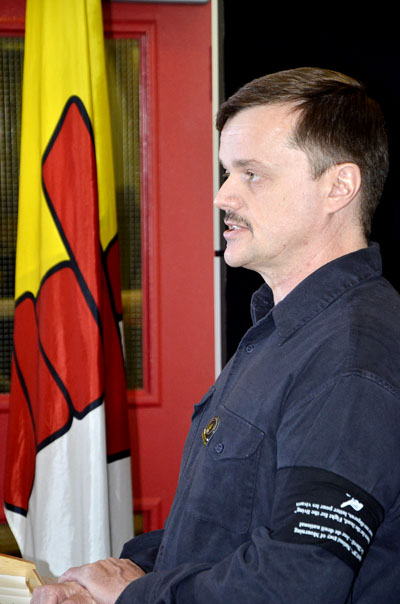 Geoff Ryan, the Northern Territories Federation of Labour’s vice president for Nunavut, speaks April 28 at the Nunavut Legislative Assembly during an event marking the National Day of Mourning for those injured or killed on the job. (PHOTO BY DAVID MURPHY)

Flags stood at half-mast in front of the Nunavut legislative building in Iqaluit April 28, as Nunavut recognized the National Day of Mourning for those injured or killed on the job, including seven workplace deaths in the Northwest Territories.

John Van der Velde, the vice chairperson and a director at the Workers’ Safety and Compensation Commission of the NWT and Nunavut, said “any life lost is unacceptable.”

“Together, with the Northwest Territories, we pay respect to the six men and one woman who lost their lives in 2013 due to workplace incidents or illnesses,” Vander Velde said.

A total of 977 Canadian workers died on the job in 2012, according to latest statistics from the Association of Workers’ Compensation Boards of Canada.

And 850 people in Nunavut and the Northwest Territories lost time at work due to injuries or illnesses.

“The Government of Nunavut and the Government of the NWT should immediately pass into legislation the new occupational health and safety regulations that have been drafted and awaiting approval for over two years,” Ryan said.

But Ryan warned that something “very unsettling happens each year following this day of reflection.”

“Talk is cheap when death and injuries continue to rise,” he said.

“On this day of mourning, let’s mourn the dead, but fight for the living.”

An RCMP member laid a wreath next to the day of mourning book, which holds the names of those who died on the job in the NWT and Nunavut in years past.

Iqaluit-Sinaa MLA Paul Okalik was the first to place a flower next to the book, after a brief moment of silence.