But tenants still have time to arrange a payment, agency says 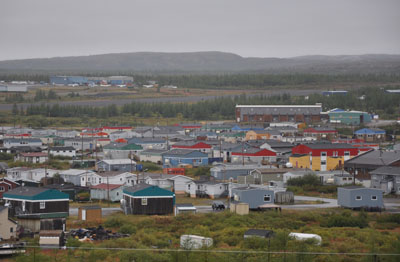 As many as 70 social housing tenants across Nunavik will have received eviction notices over the last few days, but the KMHB says it’s not too late for them to make payment arrangements. (PHOTO BY SARAH ROGERS)

The Kativik Municipal Housing Bureau says that final eviction notices have gone out to roughly 68 non-paying tenants—who could be out of social housing by the end of the month.

Nunavik’s social housing agency took a break from its eviction process in 2017 to develop a new strategy to help tackle the growing amount of unpaid rent.

In early 2018, the KMHB launched its Pay Your Rent campaign, which sent staff to visit non-paying tenants in person to offer advice and support on how to catch up on rent payments.

In August, Quebec’s Régie de logement, or rental board, would have called any remaining non-payers to appear at hearings held in each of Nunavik’s 14 communities.

From a group of roughly 400, the KMHB whittled down its list, removing elders and young families, to about 70 tenants who have demonstrated the ability to pay rent, but don’t.

Those residents would have received their fourth and final notice over the last couple of days, which gives tenants a five-day notice before a bailiff comes to evict them.

“Tenants still have time to arrange a payment,” Brisson said.

“The agreement is if they can give 10 per cent of their debt today, we’ll take them off the list.”

Social housing tenants in Nunavik pay anywhere between $400 and just over $800 in monthly rent, depending on the size of the home and the family’s income.

Among the tenants facing eviction this year, the amount of rent owing varies from about $1,300 to over $55,000.

The KMHB hasn’t released its overall arrears in recent years; in 2015, that number sat at $17. 8 million.

In the last year the KMHB carried out evictions, in 2016, roughly 20 families were evicted from their social housing units.

Evictions are controversial in a region with a shortage of housing; pushing one family out inevitably forces them to move in with another.

Nunavik is also moving into its coldest season of the year.

“We know it’s late in the season, but there were many legal steps and procedures we had to follow,” Brisson said.

“This is our limit, the end of October.”

When the KMHB’s board of directors opted to take a break from the eviction process in 2017, they came back with what they hoped would be a more “human” approach, by visiting those families in person to discuss their needs.

“Evictions are not necessarily the solution in Nunavik; that’s why we developed a different approach,” Brisson said.

“The list [of non-payers] has gone down, so we’re happy with that. But in the end, tenants must understand the importance of paying rent.”

Evictions are expected to be carried out between Oct. 25 and 29.