“This culture of silence must be broken, particularly when young children are involved.” 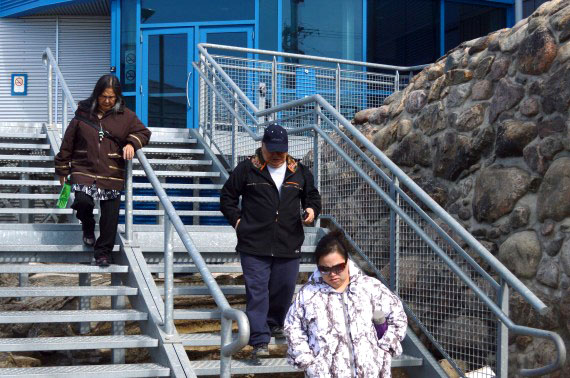 Ex-teacher Johnny Meeko leaves the Nunavut Court of Justice in Iqaluit after a court appearance May 30, 2017. Today he was sentenced to eight years and one month in prison. (FILE PHOTO)

Former Sanikiluaq teacher Johnny Meeko is sentenced to eight years and one month, likely in a federal prison, for 14 convictions on sex crimes against children committed over a 35-year period between 1972 and 2007, Justice Neil Sharkey ruled today.

The 20-page sentencing judgment that Sharkey imposed on Thursday, April 26 marks the end of a drawn-out case.

Meeko’s convictions range from sexual touching to sexual assault and soliciting oral sex from a minor. His victims were mostly eight- and nine-year-old girls at Nuiyak School in Sanikiluaq.

“Year in and year out, Johnny preyed upon his young charges, oblivious or mindfully dismissive to any harm he may have been inflicting upon their fragile psyches, and confident that he would remain untouched and free from interference,” Sharkey said in the decision he read at the Nunavut Court of Justice.

After applying case law and doing other calculations, Sharkey imposed a global sentence of 14 years and six months.

But to reflect Meeko’s age, 63, and culpability, Sharkey reduced that total sentence by five years, to nine years and six months.

After doing more arithmetic, he then subtracted one and a half years for time already served, to produce a final net sentence of eight years and one month.

In December, Meeko was found guilty of 27 sex crimes, after his 2015 trial was left in limbo while RCMP continued an investigation.

At the same time he was acquitted of more serious accusations that included rape and forcible confinement.

“Thirteen of these 27 charges are redundant because they relate to the same criminal activity as the 14 remaining charges,” Sharkey said.

During sentencing submissions on April 13, defence lawyer Stephanie Boydell recommended a sentence for Meeko of two years less a day, short enough to be served in a territorial jail.

The Crown opted for three and a half years, which would have to be served in a federal jail.

That’s after time already served in custody. But Sharkey said those proposed sentences are too short.

“In my view, these suggested sentences are not sufficiently denunciatory of Johnny Meeko’s crimes,” said Sharkey.

In fact, a sentence that is too short could discourage victims of sexual abuse from coming forward, he said, adding that Meeko’s victims couldn’t “muster the courage to come forward” until 2012.

In his judgment, Sharkey sent a broader message about the sexual abuse of children in Nunavut.

“There is, in my view, a culture of silence prevalent throughout Nunavut, whereby sometimes family members of an abuser and even some other right-thinking members of the community essentially bury their heads in the sand—like ostriches—and remain oblivious to the activities of a sexual predator in their midst,” he said.

“This culture of silence must be broken, particularly when young children are involved.”

By failing to report abuse for fear of causing “disharmony in the community,” Sharkey said parents are “sacrificing their own children, usually little girls, to a lifetime of recurrent trauma and dysfunction.”

Themes of “trauma, anger and isolation” are all found within impact statements given by Meeko’s victims, many of whom now experience anxiety and depression, and who live in fear for the safety of school-aged children in their families.

When victims did try to stand up for themselves, some said Meeko threatened them into silence.

“As a respected teacher and church warden, Johnny was above suspicion, and so he took advantage of this status,” Sharkey said.

“Understandably, the victims of such a predator may fear they will not be believed if they speak up.”

One victim said Meeko told her “God would cut out her tongue” if she told her parents what he did.

Another victim said Meeko laughed at her when she said she would report him.

Victims of sexual abuse and their families should be confident that their stories will be treated seriously when reported to the RCMP, Sharkey said.

“The way the court can support this goal is by sending the message that such sexual predators will be dealt with severely,” he said.

Meeko has denied all charges during the lengthy lead-up to his sentencing.

While there is no penalty for pleading not guilty and exercising his right to trial, Meeko will not receive the credit given to offenders who plead guilty, Sharkey said.

“Johnny’s refusal to accept the findings of guilt does not bode well for his rehabilitation and the health of the community upon his return after he has served his time,” Sharkey said.

Meeko is prohibited from contacting victims while he is serving his sentence and from communicating with anyone under the age of 16 for the next five years unless there is another adult around, or he is in his own home.

He must also comply with the Sex Offender Information Registration Act for life.

Prior to receiving a sentence, Meeko had his bail revoked on April 13 when sentencing suggestions from lawyers showed the offender was sure to serve time.

On May 7 a new charge against Meeko will be heard: an alleged breach of bail conditions.