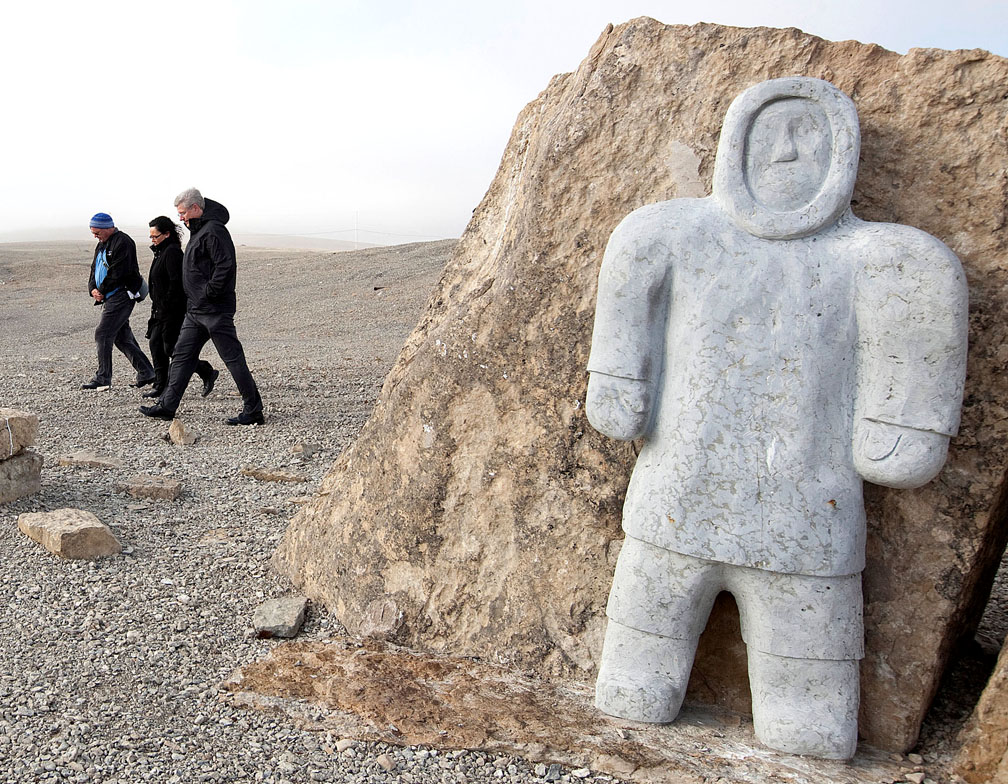 A monument to the High Arctic Exiles in Resolute Bay, unveiled on Sept. 8, 2010, and created by carver Simeonie Amagoalik, who worked on it for one year. In the background, former Prime Minister Stephen Harper, former Nunavut MP Leona Aglukkaq and Nunavut Senator Dennis Patterson walk around the monument during a visit on Aug. 23, 2011. A plaque bears this message, in English and Inuktitut: “They came to these desolate shores to pursue the government promise of a more prosperous life. They endured and overcame great hardship, and dedicated their lives to Canada’s sovereignty in these lands and waters.” (FILE PHOTO)

In 1953 and 1955, the federal government relocated more than 90 Inuit from Inukjuak and Pond Inlet to Resolute Bay on Cornwallis Island and to Craig Harbour on Ellesmere Island. Between 1956 and 1962, the families at Craig Harbour moved about 40 miles west to Grise Fiord.

Having already spent fall, winter and spring in the High Arctic and having learned enough about the land and its limited wildlife resources and its dark, cold, sunless winter, my father spoke to the RCMP on behalf of all the people in our small camp.

He requested that they be allowed to return home to their families. The land had much less to offer than they first believed, there was too much suffering among the people, so the best thing would be to return home on the next ship.

But the request was turned down by the RCMP. Some three decades later, we would finally learn that this request was never transmitted to Ottawa.

When the C.D. Howe came again to our new home in the fall of 1954, again my father, as well as the men of our camp, made another request to government personnel who had arrived on the ship, that we be returned home.

For the second time in one year, the request was turned down and, instead, the government people said they would bring some of our families to us next year.

So in 1955, the second wave of relocatees arrived in our new home and a happy family reunion took place.

That winter in the High Arctic was a very hard year for all of us, simply because we did not know the land.

Its behaviour and dark season did limit us from hunting and trapping. Frequent violent snow storms brought endless suffering and hungry days.

If it had not been for the white man’s garbage to supplement our poor diet, we could have faced serious famine that first winter.

Sarah Amagoalik, who was breastfeeding her first child, lost her appetite and her child almost starved.

“I lived on tea and raisins for many months, because my body was rejecting every food that was available,” she was to say in her testimony before the Royal Commission on Aboriginal Peoples some 40 years later.

Sarah’s appetite returned after my father found two small cans of salmon from the dump and fed her and her child, so she was saved from an uncertain fate.

As for me, my body too was rejecting every food item that I was eating. Food from the white man’s garbage brought back our appetites.

I got my appetite back when my father brought back a few rotten, frozen oranges. My mother was able to thaw them, and, after she removed the green spoiled parts, she handed them to me and from then on my body began to accept whatever small foods I was given.

In many ways, we became partly helpless in our strange surroundings. Each winter we became almost helpless hunters because we did not know where to begin to hunt for our food.

The darkness hid many features on the land. If we could have seen them, we could have used them to guide us when we travelled. It took us many weeks before we were able to get seals for our food, and as the seasons changed our world to total darkness, we faced many hungry days.

Our daily struggle had its reward, because Amagoalik was able to catch more seals with his nets, and if any seal was not caught we had the white man’s garbage to rely on. Also, a few store-bought foods, such as they were, helped us survive that hard winter of 1953-54.

Using nets for sealing was a new experience for us because we never had to use nets in our original home. We had always depended on the open sea to provide us with seals, and if open water was not accessible, we hunted seals through seal holes.

But in order to hunt in open water a hunter needs daylight to see the seal and to find a seal breathing hole.

In my poor health, I was one of those who suffered the most. Because my fragile health condition did not allow me to wander out of our igloo, I spent most of my daily life inside.

My grandmother, because of her age, did not wander out of her igloo for months at a time. At the same time, without our knowledge, the deadly disease that I was carrying was spreading among all inhabitants of our small camp. More separation of families was in our future.

When the C. D. Howe left Resolute Bay in September of 1954, I was on board on my way to a southern hospital as my mother had predicted two years earlier.

At this time, I wasn’t sure if I would ever see my family again, but I did not feel any fear and was sort of excited about seeing what the white man’s country looked like. Then I sailed away into an uncertain future.