Ottawa police investigator testifies on day one of Nunavut inquest 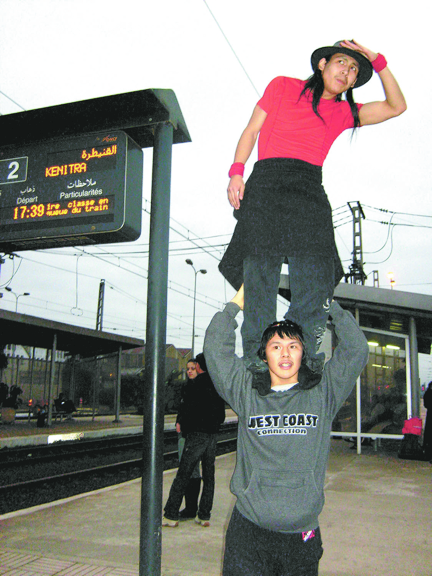 A six-person coroner’s jury in Igloolik is currently examining the circumstances surrounding the death of Solomon Uyarasuk, on shoulders, in RCMP custody two years ago. (FILE PHOTO)

IGLOOLIK — When RCMP found Solomon Uyarasuk in the Igloolik RCMP detachment’s prison cell Sept. 23, 2012, the young man was hanging from a nylon belt fastened around his neck and attached to the cell door.

That was just some of the heart-rending testimony heard by a six-person jury on Nov. 24 — day one of an anticipated five-day coroner’s inquest into Uyarasuk’s death unfolding this week in Igloolik.

Uyarasuk had jammed the belt’s plastic clasp into a corner of the meal slot on the cell door, a rectangular opening through which prisoners are passed food, Sgt. Dan Brennan of the Ottawa Police Service said.

Brennan was the case manager for an external investigation into the Igloolik RCMP’s conduct the night Uyarasuk died. He testified that he arrived in Igloolik 17 hours after the death of Uyarasuk, a performer with the local Artcirq troupe.

As the inquest got underway, presiding coroner Garth Eggenberger explained to the jury that an inquest is a fact-finding exercise, not a fault-finding one: this means the jury, composed of three men and three woman from the community, are charged with determining the circumstances surrounding Uyarasuk’s death and making recommendations for preventing similar deaths in the future.

Brennan, who has more than 20 years of experience with the Ottawa police, including six years as an investigator and three with a major crimes unit, led the jury through more than 100 photos taken at the scene of Uyarasuk’s death.

“Some of these photos are very disturbing,” Eggenberger warned the jury, “but it’s important you see them, so that you can understand what happened.”

“It is the opinion of this investigation that this death was a suicide,” Brennan testified.

In one picture, a serrated knife lay under a chair just outside Uyarasuk’s cell, with a piece of a nylon belt nearby. Brennan said the knife had been used to cut the belt.

The forensics officer accompanying Brennan — responsible for documenting and photographing evidence at the scene — pulled on the dangling piece of belt after Uyarasuk had been cut down, Brennan said, and it proved strong enough to support the officer’s weight.

Rhoda Kanatsiaq, Uyarasuk’s birthmother, looked at the ceiling, dabbed her eyes and rocked gently back and forth when Brennan began describing the photos.

Sometimes it proved too much for her. At one point, she rose to leave the makeshift courtroom in Igloolik’s old community hall but collapsed slowly behind her chair, sinking to her knees. Several family members rushed to her side and helped her exit the hall.

When Brennan found Uyarasuk in the cell, he was lying on his back, naked, his head towards the door, his face covered in blood, and “marks” on his chin and left shoulder.

A white mark on Uyarasuk’s forehead, where there appeared to be less blood, was consistent with the shape and size of the cage covering the RCMP truck’s back window, Brennan said.

Mark Mossey, Kanatsiaq’s legal representative at the inquest, asked Brennan if it was possible that an RCMP officer was in the back of the truck with Uyarasuk at the time of his arrest.

“I can’t say for certain if somebody was in the back with Solomon, but his behaviour, as described by the RCMP, is consistent with the blood smears found,” Brennan said.

The two RCMP officers on duty that night will testify later this week.

A number of jury members reached for tissues as they were lead through the pictures. Kanatsiaq returned, with the help of three or four women, and sat beside Mossey for about 15 minutes.

During cross-examination, Mossey asked Brennan if he was concerned that the scene of the death was not sealed until six hours after Uyarasuk’s death. Scenes under investigation are usually sealed to preserve and protect evidence.

But Mossey also asked if Brennan was concerned that the two officers on duty the night Uyarasuk died were left alone in the detachment that same day, with access to the investigation scene.

“It’s tough for Ottawa police to say what’s possible in Igloolik,” Brennan answered. “In Ottawa we have more resources… here, logistically, things are more difficult. You’d have to ask RCMP in Igloolik.”

According to multiple witnesses, Uyarasuk repeatedly screamed that he was afraid of being hurt by the RCMP while being arrested, Mossey said, specifically that his head would be bashed on the concrete floor, “like last time.”

There are video cameras in the Igloolik detachment, but they are not focused on the cells, Mossey said. When asked if video footage would have helped in his investigation, Brennan said “definitely.”

Mossey asked Brennan if he was familiar with the principles of Inuit Qaujimajatuqangit, to which Brennan said, “no.”

After describing the importance of the traditional knowledge, Inuit Qaujimajatuqangit, in Inuit culture, Mossey asked Brennan if his investigation could have benefitted from being aware of the principles.

Donna Keats, legal representative for the RCMP, asked Brennan during her cross-examination if there were any oversights in the investigation.

Brennan also said he would have liked stronger communication between the RCMP and the Ottawa Police Service, acknowledging that Uyarasuk’s next of kin may not have received “timely information.”

The Ottawa Police Service spoke to Uyarasuk’s next of kin on Sept. 25, Brennan said.

If RCMP were to conduct a parallel investigation to the external one, local communication may be improved, Brennan said.

The inquest continues Nov. 25 with the testimony of the pathologist who conducted Uyarasuk’s autopsy expected to begin.