“The animals have been our lifeblood for thousands of years. It needs to stay that way” 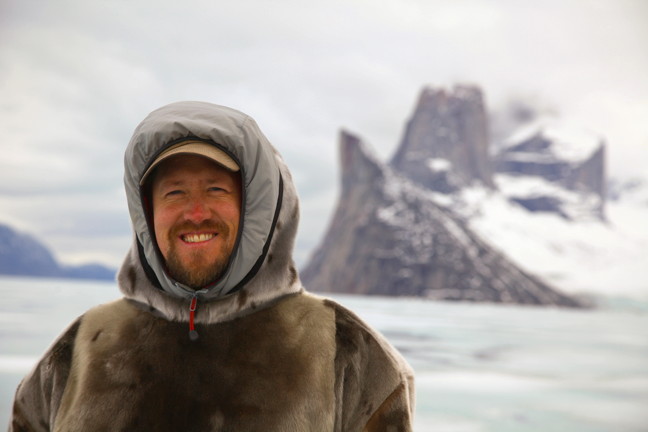 David Lavallee, Nelson-based filmmaker, during a spring 2014 trip to north Baffin to film a new documentary on the extremes of energy extraction called To the Ends of the Earth. (PHOTO COURTESY DAVID LAVALLEE) 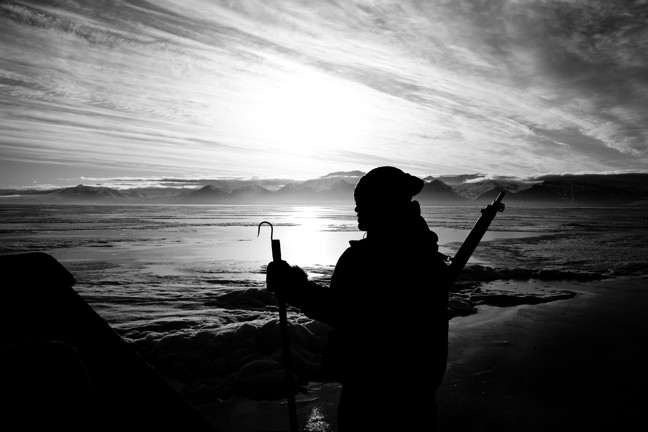 Bryan Simonee, in silhouette with seal hook, in June 2014 during filming of “To the Ends of the Earth,” a new documentary by “White Water, Black Gold” filmmaker David Lavallee. (PHOTO COURTESY DAVID LAVALLEE) 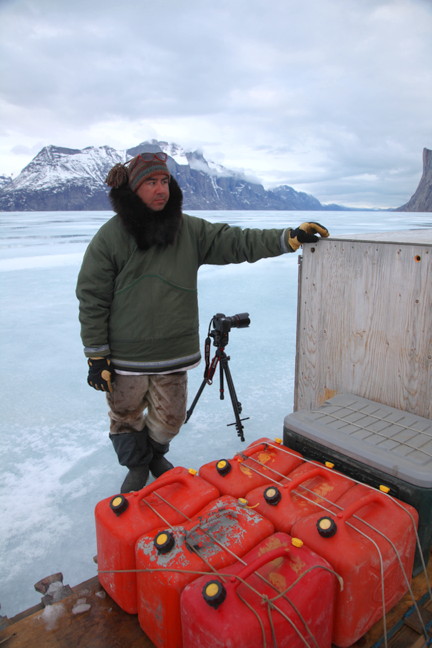 Qajaaq Ellsworth with jerry cans, in Sam Ford Fiord near Clyde River. He said this was a good picture because it shows Inuit dependence on fossil fuels. (PHOTO COURTESY DAVID LAVALLEE)

Bryan Simonee is a housing maintainer in Pond Inlet and a hunter of many animals, big and small.

He is also 31 and a father of four and knows that communities need jobs and economic development.

But Simonee also knows that jobs and companies come and go in the Arctic as they always have, but the land and sea have always provided food and materials to make things and to earn a living.

Preserving that source of food and income into the future, and the harvesting way of life that goes with it, is kind of like an insurance policy for Inuit, he says.

And so when Simonee’s friend Qajaaq Ellsworth in Iqaluit asked him if he wanted to be part of a film project on extreme oil exploration by B.C.-based documentary filmmaker David Lavallée, Simonee agreed.

“We had a nice trip to the floe edge, saw lots of narwhals. I like what he’s trying to do, protect the whales,” said Simonee.

“The animals have been our lifeblood for thousands of years. It needs to stay that way.”

The film solidified his views on the environmental cost of oil extraction in Canada and prompted him to consider another project soon afterward.

The crux of his new film is this: as the planet’s oil and gas reserves get depleted, companies must go further afield, dig deeper underground and make huge infrastructure and logistical investments to get at those reserves.

To the Ends of the Earth, which is currently in the editing stages with a projected 2016 release, argues that it now costs more, in energy and investment, to find and capture hydrocarbons than what those hydrocarbons are actually worth once refined.

“It’s often assumed in Canada that the tar sands are economically profitable, a huge amount of profits and benefits to society,” said Lavallee. But according to his math, that’s untrue.

To the Ends of the Earth makes the comparison to the whaling industry in the late 1800s.

As whales became scarce from over harvesting, whaling companies had to go deeper and deeper into the remote Arctic at great human and financial cost and they did so until those costs outweighed the gain.

Lavallée’s film looks at how, after 2005, conventional oil production bottomed out worldwide causing oil and gas companies to shift to more extreme methods and venues — the tar sands, fracking and Arctic exploration.

To highlight the Arctic portion of the film — the potential for spill disasters, for example, and the unpredictable impacts of climate change on sea ice and weather — Lavallee went to Pond Inlet and Clyde River last spring to speak with local hunters and anti-seismic activists such as Clyde River Mayor Jerry Natanine.

That’s where he met Simonee.

The Clyde River-born, Pond Inlet-raised Simonee took Lavallee and his crew — which included Ellsworth — out hunting and told them about how important country food is for remote communities.

Simonee said he was disappointed because there were narwhals at the floe edge but he was unable to get one.

Narwhal are difficult to harvest because they are smart, elusive and their hearing is so powerful you have to be silent and patient to get one, Simonee said.

He got a seal instead so Lavallée managed to get some actual harvesting on film. Lavallee said a polar bear came near where they were hunting but Simonee casually shooed it away by shouting at it.

And while it’s clear Simonee, Ellsworth and other locals wowed Lavallee with stunning Arctic scenery and taught him a few things about Inuit culture, the education went both ways.

“I support David in his effort to try and show how damaging seismic testing is,” said Simonee. “He helped me to understand the effects of it.”

Simonee said that Baffinland Iron Mines Corp. has almost daily been shipping iron ore from the Mary River mine out of Milne Inlet, near Pond Inlet, and even from far away, he can hear the roar and rumble of those ship engines.

“I could hear that big deep sound so I can only imagine with the seismic testing, how loud that would be,” Simonee said. “I’m sure it’s not a positive impact on the whales.”

Ellsworth, also a filmmaker who now works for the Government of Nunavut’s culture and heritage department, said he enjoyed working with Lavallée and the crew last spring.

There were the usual challenges of filmmaking in the North — scheduling, logistics, weather, dealing with adversity. He said they saw lots of wildlife and that the time they spent out on the land and on the sea was pretty magical.

Ellsworth said it wasn’t difficult to find local people willing to talk about seismic testing planned for next summer in Baffin Bay and Davis Strait — something local people in Clyde River are trying to prevent with a Supreme Court challenge.

He agrees with them.

“I think we have to be more cautious than we have been. It’s great to hear about and understand modern technologies that make these activities safer but I think until we’re at point where we are certain about the impact and benefits, then I think need to be cautious,” Ellsworth said.

He stressed that he doesn’t support or oppose resource development in the Arctic — just that it needs to be done wisely. In the meantime, Inuit ought to explore other economic options, he said.

“Our land and our territory has a lot more to offer than just what’s under the ground and under the ocean,” he added.

To the Ends of the Earth will likely make the film festival circuit next year along with some theatrical releases. Lavallee said he’s also hoping to show it in Nunavut.

And he’s hoping his message of extreme oil economics reaches the ears of policy makers so they might consider renewable energy research and development options and expand their view of what future society could look like.

“And I think the best way as a filmmaker I can do that is just to have a bit of a mute voice. Not try to interject my voice into it too much, just let the people speak, the people from the North, describe their experiences,” he said.

“We discover the issues through the eyes of the people who are most affected.”

You can watch a trailer for To the Ends of the Earth here.