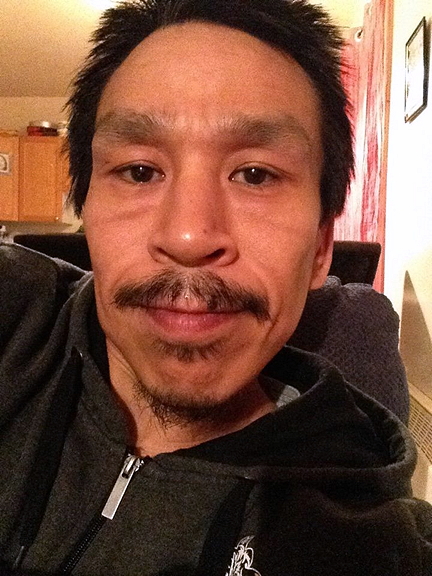 Jeremy Nuvviaq, 39, died at his home in Hall Beach May 1 after an altercation with police. (PHOTO COURTESY OF NUVVIAQ FAMILY)

On May 1, Jeremy Nuvviaq filled his Facebook page with a number of posts: a quote about a father’s love for his children; a note to his girlfriend—“I’m sooo lucky to have you”—and recipes for chicken tacos and carrot cake.

By 10:30 p.m., his mood had clearly shifted, when Nuvviaq posted “I hope you watch this suicide by cop.”

Around the same time, the 39-year-old began live-streaming a video from his page, threatening suicide, crying and holding what appeared to be a gun under a blanket.

The video stopped before RCMP officers were called to his Hall Beach home. The officers attempted to de-escalate and negotiate with Nuvviaq, but were unable to, the RCMP later said in a news release.

An officer finally shot Nuvviaq, who died later from his injuries.

Some of Nuvviaq’s family members got a call at about 1 a.m. with the news. One relative, who didn’t want to be named, went down to the health centre to see his body.

“It’s really difficult,” said the family member, whom we will call Mary. “It’s all of a sudden.”

Mary, who spoke to Nunatsiaq News, had seen some of the live-stream earlier in the evening but she said it looked as if Nuvviaq had been drinking.

She worried he would be too violent to talk down—even though she believes he held a pellet gun under his blanket and not a real rifle.

Mary doesn’t blame police for how they responded to Nuvviaq’s crisis, but she does believe his death was preventable.

She had seen Nuvviaq earlier that same week and said he appeared happy and optimistic.

Nuvviaq was living with his common-law partner and step-son before he died. He had other children living in Arctic Bay.

He had just graduated from Nunavut Arctic College’s Getting Ready for Employment And Training (GREAT) program, a 14-week job skills course, and was looking for work.

“I think he had a lot of problems and he never talked about it,” Mary said. “He never asked for help. He told me before he could control himself.”

But Mary said it wasn’t the first time Nuvviaq had talked about suicide at the hands of the police.

The RCMP said its officers are trained to consider “suicide by cop” as a possibility in terms of their risk assessment when responding to a call involving a suicidal individual.

Nuvviaq couldn’t have made his intentions much more clear May 1.

Suicide by police, or suicide by cop, happens when an individual wants to die but wants someone else to kill them. So they provoke an officer to create a situation in which the officer is forced to shoot them.

A 2009 American study called “Suicide by Cop Among Officer-Involved Shooting Cases” looked at the phenomenon, finding that 36 per cent of those incidents could be categorized that way.

The study, written by a pair of California academics, found that 95 per cent of the subjects involved in those cases were male, while 62 per cent of all subjects had a confirmed or probable mental health history.

In one in five cases, the individuals used an unloaded or fake weapon to encourage a response.

“It is clear from our research that [suicide by cop] is a common occurrence among officer involved shootings and must be considered as an issue during post-event investigations,” the study concluded.

The Ottawa Police Service has been tasked with investigating the shooting death given that it involved RCMP officers.

A spokesperson for the OPS’ major crime unit told Nunatsiaq News last week the force could not offer a timeline for the investigation, nor would it share the investigation’s final results publicly. The RMCP could comment on the results though, he added.

Nunavut RCMP communications officer Sgt. David Lawson, who also serves as chair of the Embrace Life Council in Nunavut, called Nuvviaq’s death, and ‘suicide by cop,’ a “rare occurrence,” though something the council will likely discuss.

“In saying that, whether these incidents happen as ‘suicide by cop’ or in a different form, they usually stem from the same issues and problems and it’s these things we try and tackle [and] improve,” Lawson said.

In Hall Beach, Nuvviaq’s family held a funeral for him last week.

Jackie Nuvviaq is mourning his brother’s death; the two were close and often met for coffee. He said he saw his brother just days before his death and he appeared to be in good spirits.

Jackie said all he can do now is try to move forward; he’s trying not to dwell on the past.

“He wanted to leave this world and now he’s gone,” he said. “I hope everyone can find peace.”

If you are in need of support or have thoughts of suicide, here are toll-free numbers you can call to speak to someone: