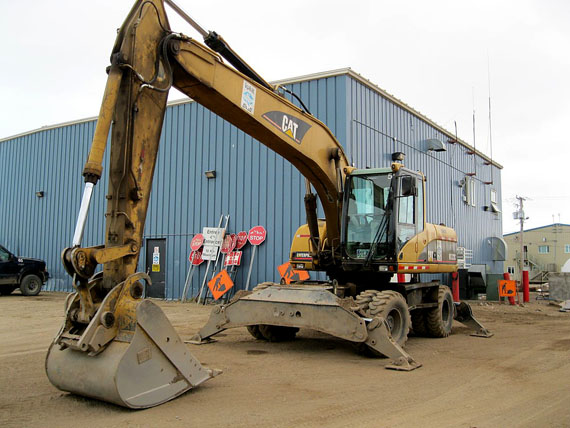 Iqaluit’s public works department needs $119,000 more to install a security fence around its compound. The 650-metre barrier will safeguard the department’s equipment and vehicles. (PHOTO BY PETER VARGA)

The City of Iqaluit’s public works department needs another $119,000 to build a security fence around its garage on Federal Rd., on top of $140,000 budgeted for the project in 2013.

The department tabled the request with city council Nov. 26, saying the $260,000 fence is needed to safeguard equipment and material worth hundreds of thousands of dollars.

Costs of the fence break down to about $67,604 for the fence materials, and $192,195 to install the 650-metre barrier around the public works facility.

The department purchased the fencing this year, and Nunavut Excavating won the bid to install it.

As councillors weighed the high costs of installing the fence, the city’s chief administrative officer John Hussey, in agreement with the city’s director of corporate services, John Mabberi-Mudonyi, said auditing principles require that the city keep equipment “in a secured location.”

“It’s like money in the bank, which you’d keep in a safe,” he said. “We’ve got hundreds of thousands of dollars of vehicles and equipment in there.”

Unsecured equipment is vulnerable to vandalism and theft, which “has been an issue over the years,” he added.

Councillors Simon Nattaq and Noah Papatsie agreed on the need for the fence, pointing out that it would save the city money in the long run.

Papatsie added that the facility’s location on Federal Rd.— near the site of the city’s new airport terminal and across from the Baffin Correctional Centre — makes the project essential.

“I think it’s a great idea to fence it up, no matter what the cost is,” he said.

Although there was no mention of it in public works’ written request for decision to council, department superintendent Joseph Brown told council the city’s municipal enforcement department asked to use the yard as well, once it is fenced in.

“Does municipal enforcement have anything in their budget that they can contribute to this?” asked Coun. Mark Morrissey.

“If they’re going to be using this facility, that would reduce the impact to public works, in terms of capital.”

On that note, council ruled to defer the request for the added $119,000 to the 2014 budget. Brown said installation of the fence would not begin until 2014, in any case.