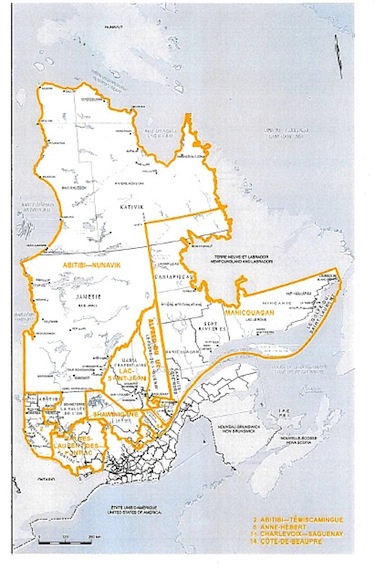 On this map from the Federal Electoral Boundaries Commission, you can see the boundaries of the proposed Abitibi-Nunavik riding which would see part of Nunavik put into the Manicougan riding.

KUUJJUAQ — A recent proposal by the Federal Electoral Boundaries Commission for Quebec, which redraws the Abitibi-James Bay-Nunavik-Eeyou riding, does not impress Nunavik leaders.

“The redistribution of boundaries of federal electoral districts by which the territory of Nunavik would fall under two electoral districts do not take into consideration community of interest and identity,” states a resolution passed Sept. 12 at a meeting of the Kativik Regional Government councillors in Kuujjuaq.

That resolution comes after the recent recommendations from the independent commission, which proposes every 10 years, following a national census, how to redistribute Canada’s federal ridings to reflect population changes in Canada.

After this redistribution, there will be 338 seats in the House of Commons.

The commission’s recommendations for change don’t affect Nunavut, which, like the other two territories, keeps its own riding.

But while the commission suggests that the name of the riding that includes Nunavik should change from Abitibi-Baie James-Nunavik-Eeyou to Abitibi-Nunavik, its proposal doesn’t call for a separate riding for the Nunavik region, something Nunavik has lobbied for since 1972.

On its website, the commission says its main goal is to set boundaries so each riding contains roughly the same number of people — 111,166.

Nunavik, with its population of about 11,000, falls short of that goal.

But the commission also says it tries to ensure a “manageable geographic size” for ridings in sparsely populated regions, and, “in extraordinary circumstances… commissions may create districts that vary from the average by more than 25 per cent.”

And the redistribution can also take into account “communities of interest or identity” and a riding’s history when suggesting changes.

Ten years ago, in 2002, the Kativik Regional Government submitted a brief to the commission recommending the creation of an electoral district for Nunavik.

But then, although the commission’s report acknowledged that Nunavik’s political leaders made “serious and sincere arguments” at a public hearing, in the end it decided against giving the region its own riding.

“Unfortunately, the commission, which did take the geographic size of the territory into account, feels that it cannot, out of concern for intraprovincial electoral equity, accede to the pressing demands of the Inuit community, of some 10,000 inhabitants, to create an exceptional electoral district north of the 55th parallel primarily occupied by that community,” the report said.

The KRG and Makivik plan to make a joint presentation to a Federal Electoral Boundaries Commission hearing scheduled for Oct. 24 in Longueuil.