CHARS will be built in the Plateau area of Cambridge Bay 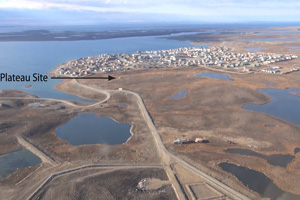 The future Canadian High Arctic Research Station in Nunavut moved one step closer to reality, with the Feb. 27 announcement of where the facility will be built in Cambridge Bay — on the Plateau just outside town.

“This is another key milestone in the construction phase of the Canadian High Arctic Research Station,” said Bernard Valcourt, the new minister of Aboriginal Affairs and Northern Development, in a news release.

“With the selection of the Plateau site as the location for CHARS, we are one step closer to building this major centre for scientific research and to building important partnerships across the North, Canada, and internationally.”

The Plateau site, one of five which was under consideration for the $142.5-million facility, is located on a slope overlooking the community and the bay, but close to the centre of the town.

This site will form the main campus of CHARS, and it may include one or multiple buildings, with “excellent potential use for community integration,” the news release said.

The main campus will also use existing and future community infrastructure and remote experimental sites.

Nunavut MP Leona Aglukkaq, minister of Health, the Canadian Northern Economic Development Agency and the Arctic Council, said that “with its Arctic-based operations, CHARS supports the government’s role in fostering both domestic and international collaboration, research, and innovation in the circumpolar region.”

The site was selected after consultation and discussion held with people in Cambridge Bay, including elders and hamlet staff, and Public Works and Government Services Canada.

Once built, CHARS campus will integrate the use of green technologies, the news release said.

And when its operational, research education and outreach conducted at the CHARS “will provide northerners with skills and experience to better participate in the labour force, including mining and energy, natural resource and wildlife management, and health and life sciences,” the release said.

CHARS is supposed to open in July 2017 to coincide with Canada’s 150th anniversary celebrations.