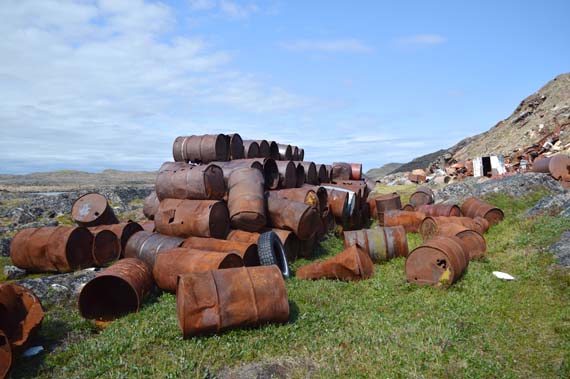 Transport Canada recently awarded a $5.4 million contract to Kudlik Construction Ltd. for cleanup of the historic dump resting along the mouth of Sylvia Grinnell River. (PHOTO BY STEVE DUCHARME) 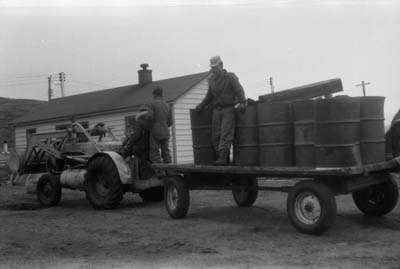 An American military base established at Frobisher Bay in the late 1950s was largely responsible for dumping the scrap metal waste, like the used oil drums and vehicles currently found at the site. (PHOTO COURTESY OF TOSHIO YATSUSHIRO COLLECTION)

Transport Canada has confirmed that it awarded over $5.4 million to Kudlik Construction Ltd. for cleanup of the dump,which lies along the mouth of Sylvia Grinnell River—a popular source of fish.

The contract follows recommendations outlined in a 2016 report by Arcadis Canada Inc., commissioned by Transport Canada, that detected the hazardous debris buried in the area and noted in earlier studies dating to 2001.

“The nature of the debris in the main landfill and scrap metal dump suggest that the [United States Air Force] was likely responsible for depositing a large portion of the wastes currently found on the site,” said the report, which estimated the dump was started around 1963.

That’s when the Frobisher Bay airbase and weather station was sold to Canada by the U.S. military, but not before American personnel bulldozed old cars, appliances, fuel containers and other toxic refuse over a cliff near the river, the report said.

The site was used intermittently until the 1970s, when it was abandoned for another landfill near Apex.

The area is still used today as a “rogue dumping site” by local residents, the study said, and that could be another source of contaminants. Along with the remains of vintage army vehicles and cars, appliances and modern waste, like car batteries.

Surveyors identified toxic petroleum hydrocarbons, polychlorinated biphenyls, or PCBs, pesticides, and other hazardous materials at four zones within the dumpsite, extending from higher ground to within a few metres of the river.

Work will begin at the site in the coming weeks and will continue until October, Transport Canada said. The remaining non-toxic waste will be sealed into a new landfill and monitored closely until 2020.

The question is: who is responsible for cleaning them up?

Since many of the contaminated sites predate Iqaluit’s incorporation as a municipality, the responsibility for their remediation—such as the old metal dump—can be hotly contested.

Transport Canada said its responsibilities to remediate land in Iqaluit extend to areas like the Sylvia Grinnell dump, as part of an agreement to cleanup lands around the airfield that were transferred to the Government of Nunavut in the 1990s.

But in submissions to the Nunavut Planning Commission for its upcoming draft Nunavut Land Use Plan, the City of Iqaluit identified eight contaminated sites in and around the municipality that don’t fall under the airfield agreement.

Those include areas that have yet to be remediated in West 40, Federal Road, Apex, Upper Base and Lower Base.

Redfern said various reports on contamination around Iqaluit often never find their way to the right departments, leading to confusion or inaction between municipal, territorial and federal governments on the implementation of their recommendations.

And costs associated with remediation fall well outside the financial abilities of Nunavut municipalities.

“The local level governments have never had the money to effectively be able to handle environmental remediation within their communities,” Redfern said, adding that in her two terms as mayor she’s approached federal and territorial governments about “half a dozen times” on the issue.

“Many of the residents have wondered how these sites get prioritized and the city and the residents would greatly appreciate seeing all these historical sites remediated.”

A report commissioned in 1995 at the site of the old Apex dump found elevated—but below hazardous—levels of lead, copper, zinc and PCBs in nearby soil and marine sediment on the nearby shoreline.

Redfern said the possibility of leaking contaminants from the dump could effect the quality of clams in the bay, but governments not addressed the issue.

“What is the status of the Apex dump, is it still leaching, was remediation ever done?” she asked. “If it is leaching toxins then notices should be put up around the area.”

And the city’s closed North 40 metal dump—northwest of downtown Iqaluit—also dates to the era of the U.S. air base, and shows signs the site may be leaking.

Another study by researchers from the University of Saskatchewan published in 2010 noted elevated levels of hydrocarbons in Iqaluit’s Lower Base area, but concluded the levels are too low to be of risk to human health.

Lower Base used to be a dumping ground for spent fuel canisters, dating back to the earliest period of the U.S. air base in the 1940s.

Redfern added that a study estimated costs to remediate toxins discovered in the last of of the old Butler buildings in Lower Base, one of the oldest structures in Iqaluit, at more than $1 million.

Modern Iqaluit, or Frobisher Bay, was founded when the U.S. military constructed the Iqaluit airfield during World War II, as a rest point for planes flying to Europe on the Crimson Route.

During the Cold War, Frobisher Bay became a central relay point for construction of DEW line stations across Canada’s North, which were built to detect bombers from the Soviet Union crossing into North America through the Arctic.

After the DEW line was replaced by the North Warning System, starting in the late 1980s, many of those stations were abandoned in the early 1990s, leaving behind heaps of toxic waste and contaminants.

In 1996, the Department of National Defence began remediation of 21 DEW line sites across the Arctic at a cost estimated at over $575 million in 2014.

Despite being surrounded by many of the same hydrocarbon and PCB contamination garbage leftover from military uses, only a few hazardous sites near Iqaluit—like Upper Base and Resolution Island—were marked for cleanup as part of that project.

“Despite the fact the Americans set up [Iqaluit] and used key areas within the community for military purposes.”