Plans for a new Nunavut rally in the works 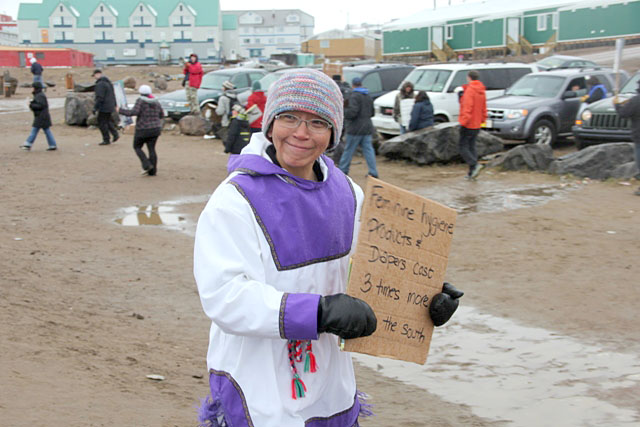 Leesee Papatsie at the June 9 food price demonstration in Iqaluit. Her Facebook group, “Feeding My Family” listed 19,000 members as of June 12. (SAMANTHA DAWSON)

Leesee Papatsie is reeling from the success of her Facebook group, “Feeding My Family.”

“What’s good about it is that people are initiating [the conversation]. And I just have to sit back and smile,” said Papatsie, her voice rising with pride.

Papatsie created the group May 29 to raise awareness of the high price of food in the North and to gather Nunavummiut for a demonstration.

The group has received much publicity since the demonstration took place June 9, mentioned in media outlets like the Huffington Post, the Globe and Mail and the Montreal Gazette.

Papatsie says she receives emails and messages daily from people supporting her cause.

But, like a Hollywood celebrity or high-profile professional athlete, she can’t keep up with all the fan mail.

Although she may have a smile permanently pinned on her face, she can only sit back for so long. It’s hard work maintaining the group and keeping up with comments.

But the outpouring of offers to help has eased the workload on Papatsie a little.

“Tons of people [are] asking to join. It’s hard to keep track of it all. I’ve asked Nunavummiut to help with the site, it’s too much for us,” said Papatsie.

It isn’t just people from Nunavut lending a hand, however.

One example is Danielle Robineau of La Sarre, Quebec, saying, “I really feel sick and helpless as I read all your comments. What can I say, what can I do? I just don’t know.”

Papatsie is trying to plan a meeting with the group administrators to decide which direction to take “Feeding My Family.”

She thinks there is potential to split the group up into sections — one for comments and general discussions, another for posting photos, and another for informing Nunavummiut with a fact sheet about food costs.

For now, the plan is to refocus on the original goal to unify Nunavummiut and plan for a new rally.

“That’s what we’re working on. [There’s] talk of another protest coming up,” said Papatsie. “The next one will be more thought out with more focus, putting our voices out.”

She wants people to know that the group is working, too.

“Someone told me that in one of the communities the price of an avocado went down. And there were other prices that went down,” said Papatsie, adding that she will fight food prices one avocado at a time, “if that’s what it takes.”