Buckets of pasta: feeding the hungry masses at Nunavut’s gold mine 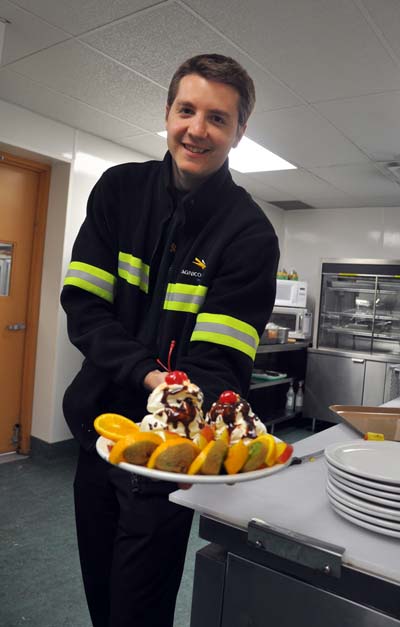 A Meadowbank employee shows off his sundae creation during the cafeteria’s popular “soft ice cream Sundays.” (PHOTO BY SARAH ROGERS) 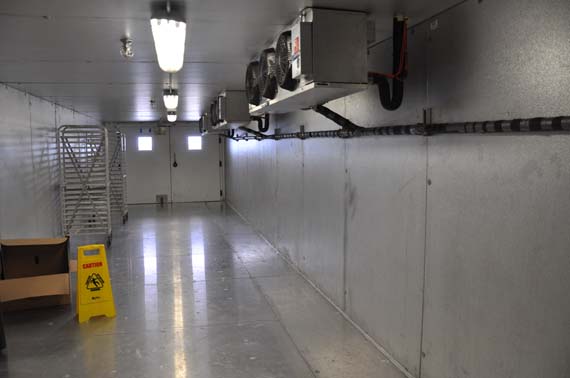 Meadowbank’s giant potato fridge, waiting on the first sealift delivery of the year, can hold three months’ worth of potatoes when full. (PHOTO BY SARAH ROGERS) 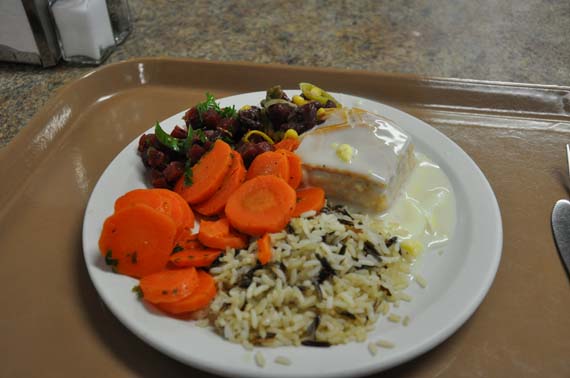 Lunchtime at Meadowbank: salmon pie in a bechamel sauce, served with wild rice, steamed carrots and a beet salad. (PHOTO BY SARAH ROGERS) 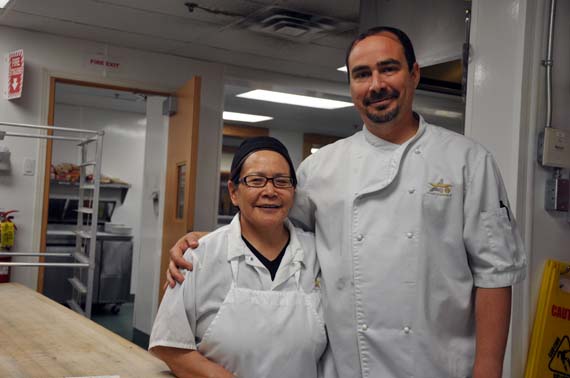 MEADOWBANK MINE — While the average person might be impressed with the volume of work performed by the haul truck drivers and mill workers at the Meadowbank gold mine outside the central Nunavut community of Baker Lake, what they might not appreciate is what happens in the kitchen.

To do that, the kitchen requires a lot of food, planning and many helping hands.

“It’s like an orchestra,” said first cook Eric Laurent St-Louis, as he walks through the kitchen. “Everyone has their part to play.”

A table at the back area of the kitchen serves as a butchering station, where hunks of meat are first cut up.

At another station, a cook’s helper prepares meat balls from a giant vat of ground meat.

Meadowbank’s kitchen is also home to giant steam pots and slow cookers. One can cook a 200-litre batch of soup; another can handle 400 litres of pasta for spaghetti nights on Monday.

Next to the steam cookers, 30 pans of macaroni and cheese are stacked in two fridges, “ready to go” for the next meal.

The largest space allotted to the kitchen is home to warehouses used to store enough dry food to last for six months. Stacks of rice, flour and canned tomatoes fill the room.

For food that needs to be kept cold, different refrigerators are dedicated to different products. The “breakfast” fridge holds 450 crates of eggs — the kitchen serves more than 8,000 eggs in a week, just for breakfast.

Another long and narrow walk-in fridge is completely empty. This is the potato fridge; once the first sealift of the year makes it to Baker Lake in mid-July, it will be filled with nothing but potatoes — enough to feed crews for three months.

At the far end of the new kitchen’s storage area, a larger walk-in freezer stores the kitchen’s meat, including boxes of elk, Arctic char and caribou.

Every Thursday, the kitchen serves a country food meal — last week it was caribou stew.

“At first, a lot of the southerners wouldn’t eat it, but now they love it,” St-Louis said. “Char is our most preferred fish, and we just serve it salt and peppered and lightly seared.”

Despite the kitchen’s ample and varied culinary efforts, mine staff seem to prefer Pogos when they’re served.

Kayla Parker, a cook’s helper from Baker Lake, said her Inuit co-workers are big on Italian staples such as pizza and spaghetti.

The kitchen’s dessert table, lined with squares, cakes and pastries, is also a popular stop.

For Inuit employees who miss regular access to wild food, Meadowbank offers a separate kitchen for them to prepare their own. The mine site also hosts its own country food nights, which are open to all staff.

On a Monday evening, Thomas Comer, a human resources agent for Meadowbank’s Inuit staff, chops pieces of caribou, potatoes and carrots to go into a big pot. Another employee makes bannock to serve with the stew.

It’s a welcome change to the regular rotation of cafeteria meals, employees say, as they tear off pieces of warm bannock from the pile.

This is Meadowbank’s second kitchen, built to replace the mine site’s original one that was destroyed in a 2011 fire.

The same fire burnt through a food storage area containing perishable foods, the camp cafeteria and nearby offices.

The damage was estimated at $18 million, not including the production slow-down.

For several months, workers ate in a makeshift cafeteria set up at Meadowbank’s gymnasium, until the new facility could be built later that year. 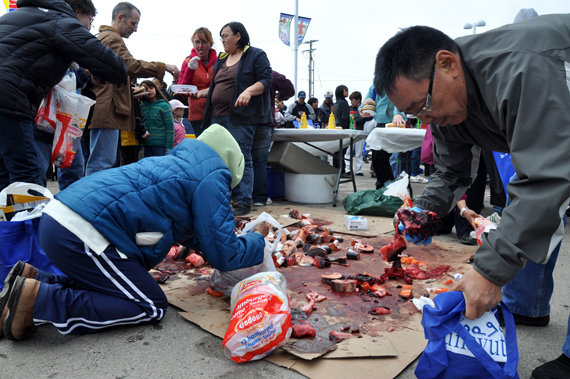