“We’ve got nothing coming out of it anymore” 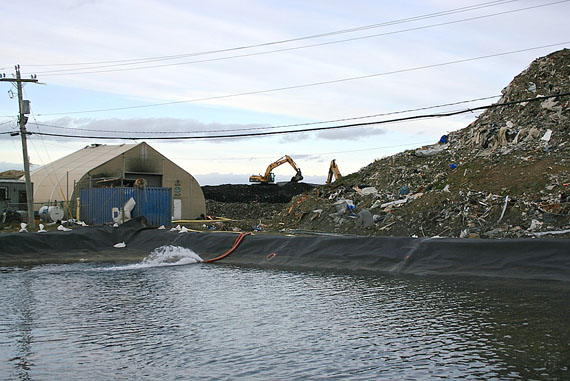 A settling pond at Iqaluit’s dump collects waste water run-off from fresh water sprayed onto the smouldering garbage pile Sept. 14. Excavators dig into the remains of what Iqaluit residents used to call the “dumpcano.” (PHOTO BY PETER VARGA) 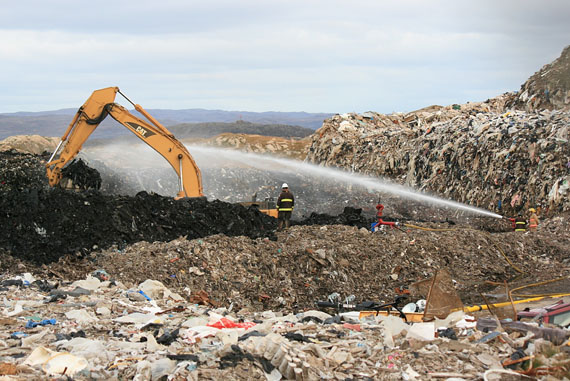 Firefighting crews dig away at the blackened remains of Iqaluit’s dump fire on Sunday, Sept. 14. Site manager Mike Noblett said industrial firefighters, contracted by the city, expected to finish off the fire on Sept. 16, after 17 days of work. (PHOTO BY PETER VARGA)

Industrial firefighters were ready to stamp out the last remnants of Iqaluit’s dump fire, Sept. 16, just 17 days into their campaign to extinguish the football-field-sized mound that has burned since May 20.

Site manager Mike Noblett of Global Forensics Inc., contracted to run the city’s dump-extinguishing operation, told Nunatsiaq News, Sept. 15, that smoke had practically stopped emerging from the site by the end of the day.

“We’ve got nothing coming out of it anymore,” he said. “So we’re in good shape.”

Excavators and a backhoe were digging into the last remnants of smoking garbage Sept. 16, and continued their work spreading the doused ashes in strips “three to six inches” thick, from the north end of the site to the south, Noblett said.

In the days that follow, a bulldozer and other heavy equipment will continue to spread, compress and flatten the ash and burnt trash where the “dumpcano”— as city residents once affectionately called the mound — once stood.

That flaming pile proved too big for the city to deal with when it flared up in the spring. Lacking water, equipment and firefighters to put it out, the city agreed to contain the blaze to the mound, at first, and let it burn itself out.

Concerns about persistent smoke and possible health effects on residents prompted the city to create an extinguishment plan, to be carried out by contracted industrial firefighters.

Alberta-based Global Forensics Inc. and Hellfire Suppression Services Inc., began their assault on the pile Aug. 31, with the help of local heavy equipment operators Tower Arctic Ltd., and added fire-control equipment from the Government of Nunavut.

Iqalummiut — who once saw a 10-metre-high smouldering mound across Koojesse Inlet for more than three months — will now see nothing more than a shallow black ridge in its place, less than five metres high.

The mound of burnt material will have to “be shaped into an aerodynamic finish,” to prevent wind from blowing into the pile and ensure no further fires are touched off, Noblett told Nunatsiaq News.

“Excavators will have to come back and shape it so that it’s got a nice rounded edge on it,” and ensure it’s “compacted down, hard.”

The doused waste — which once burned at temperatures ranging from 650 to 1,400 degrees Celsius at the fire’s height — is down to just 15 C, and will “continue to cool,” Noblett said.

Decomposing waste still heats on its own by nature, he cautioned — so the city will “still have to watch for that.”

Once compacted into the right shape, the shallow pile will remain as is, “probably until next spring, when they can put a dirt cap on it, so that it’s safe and covered,” Noblett said.

The dump-dousing battle drew fresh water from nearby Carney Creek. About 60 per cent of this boiled off as steam in the douse-and-dig operation.

Site crews kept the remaining — and potentially hazardous — waste water from flowing out of the site by collecting it into two “settling ponds” near the pile, and re-circulating onto the burning mass.

The settling ponds will now hold the waste water in place. The city, with federal and territorial government agencies will monitor and treat the water until it is safe to be released into the environment, Noblett said.

“They make sure the water meets a standard that is acceptable,” he said. “This isn’t guesswork. It’s done with proper testing and monitoring before any decisions are made.”

The waste pile contained “basically everything you could think of, and all of the above,” Noblett said, which made it all the more important to keep waste water from draining out of the site.

Waste heats naturally as it decomposes, but the extraordinary mix of all kinds of garbage found in the pile made it impossible to pinpoint the fire’s cause, he said.

“If somebody deposits human waste in there, for example, that breaks down faster than normal organic material. It could cause a fire,” Noblett said.

“It’s just and endless mix of stuff that could cause a fire. And of course, we found all of those components in there,” he said. “So what caused it? I have no idea.”

Part of the firefighting crew’s closing work will include some training of city staff on how to operate the dump site, once contract workers leave.

“We’ve offered to assist them,” Noblett said, “to get them going on the right path with the landfill, and hopefully have them being able to open this landfill again, as quickly as we can.”

The City of Iqaluit budgeted $2.6 million to put out the fire by the end of September.

Firefighters reported to the city Sept. 9 that they were ahead of schedule, and city administration said they had spent $1.14 million by that point.