“Nunavut” firms must now be 100 per cent Nunavut owned 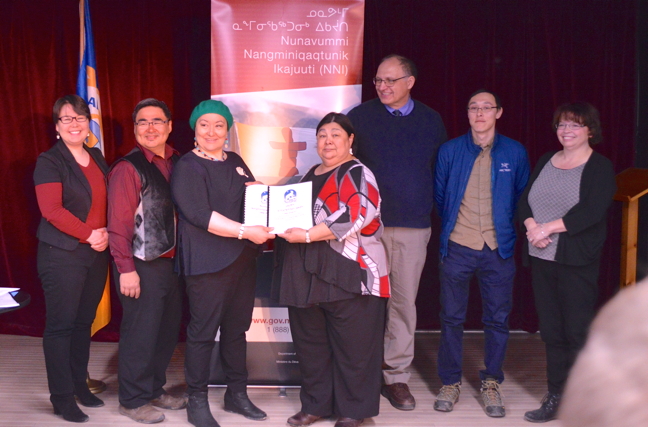 Cathy Towtongie, president of Nunavut Tunngavik Inc., in green tam, and Monica Ell-Kanayuk, minister of economic development and transportation, right of Towtongie, hold up copies of the newly revamped Nunavummi Nangminiqaqtunik Ikajuuti policy which the GN and NTI have been working on for five years. (PHOTO BY STEVE DUCHARME)

“I’m confident when this policy is implemented it will improve the lives of Nunavummiut,” said Nunavut’s minister of economic development and transportation, Monica Ell-Kanayuk, at a news conference held at Iqaluit’s Francophone Centre to announce the new rules.

The NNI policy is the Government of Nunavut’s tool for complying with Article 24 of the Nunavut Land Claims Agreement, which says must help Inuit owned businesses in the Nunavut settlement area win government contracts.

The NNI system works by providing a competitive advantage to Nunavut owned and Inuit-owned businesses.

The GN does this by applying “bid adjustments” that reduce their bid prices to theoretically lower levels than prices bid by non-Nunavut and non-Inuit companies.

Some of the new bid adjustments announced May 13 include:

• five per cent for a local business;

• five per cent for Inuit firms on the NTI Inuit Firm Registry;

• an additional five per cent for Inuit firms with 76 per cent or more Inuit ownership; and,

• an additional five per cent for Inuit firms with 100 per cent Inuit ownership.

An “Inuit” owned business is defined as a company accepted by NTI for listing on its Inuit Firm Registry.

The GN has also agreed to a more restrictive definition of a “Nunavut-owned” business. After the policy is implemented, a “Nunavut” business must be owned 100 per cent by a Nunavut resident or residents.

For all other contracts, the total allowable bid adjustment must not exceed 25 per cent of the value of the contract.

Companies doing business with the GN may also claim more points for hiring Inuit labour above the mandatory minimum, but bonuses paid under that system are capped at $150,000.

The latest revisions to the NNI are a joint effort between the GN and Nunavut Tunngavik Inc., who have worked together on project for the last four years.

The GN expects those revisions to be fully implemented by April 1, 2017.

“NTI worked hard in collaboration with the GN over the past four years to make the changes required from the recommendations outlined in the NNI review reports following the Auditor General of Canada 2012 report,” said NTI President Cathy Towtongie.

Some of the changes in the new policy include additional clarifications as to which parts of NNI are directly related to Article 24, and which ones don’t.

Appeals of GN procurement decisions will no longer go to the NNI Appeals Board, but to a new NNI tribunal.

Three GN members and two NTI members, nominated for three-year terms, will sit on that body.

Unlike the appeals board, the tribunal will be “independent,” Towtongie said.

“The members will have background, they will have training and… actual experience in procurement law or practices, government contracting or administration law,” she said.

For a complete copy of the revised NNI policy, you can visit this page on the website of Nunavut’s Department of Economic Development and Transportation: here.