“We’re trying to do everything we can to reduce costs” 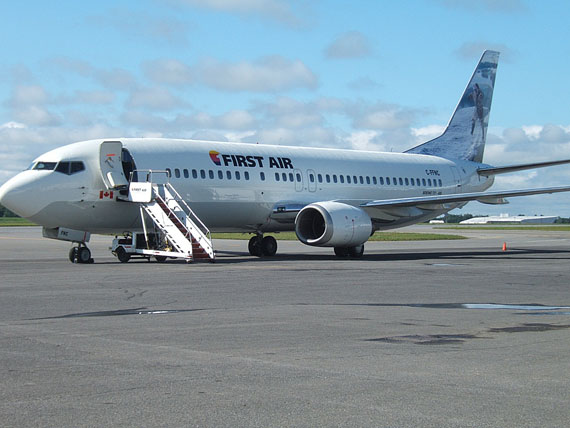 One of First Air’s new Boeing 737-400 jets sits on an apron at the Ottawa airport. (PHOTO COURTESY OF FIRST AIR)

It officially starts Sept. 16, although the new service suffered a regulatory hiccup on its inaugural flight, originally scheduled for Aug. 26.

The first flight actually landed Aug. 27 because an operating certificate from Transport Canada had not been received in time.

“It’s something that normally happens pretty quick, but in August, in a government office, we hit a bit [more] of a slowdown than we’ve been anticipating,” the executive vice president at First Air, Chris Ferris, told Nunatsiaq News.

That’s not the only speed bump First Air has had with its new route.

After touching down, an oil leak appeared on the apron at the Iqaluit airport below the aircraft.

“The airplane has been ready to go for a few weeks, and it’s been sitting buttoned up on the apron in Ottawa for the last couple of weeks,” Ferris said.

“Airplanes don’t typically like to sit. So we had a bit of a mechanical on arrival here [in Iqaluit],” he said.

Ferris said the oil leak is not unusual — most aircraft experience a certain amount of leakage, but “this is beyond what we’d be comfortable flying with,” said Ferris.

First Air has ordered new parts to fix the problem, and Ferris said the goal is to get the new plane flying on a scheduled Friday flight.

Ferris said demand for direct flights to the south has spiked recently, with flights selling out during the busy fall season.

First Air is also flirting with the possibility of adding a Wednesday Iqaluit-Ottawa service later if demand keeps up.

The new plane is one of three new 737-400s that are coming into First Air’s fleet. The other two, expected to join the fleet later on, will be used for flights from Kuujjuaq and Winnipeg, Ferris said.

The new 737-400 airplane is also 20 to 24 per cent more fuel efficient because of a newer type of engine, and better power output for amount of fuel used.

“It’s kind of like a difference between, if you had a 1978 Chevrolet [compared to] a 2000 Honda. The engines are just different,” Ferris said.

“The room between the seats is about equivalent to business class seating configuration, so there’s lots of leg room,” Ferris said.

Although there is no in-flight entertainment — an addition that would cost well over $1 million per airplane — Ferris said the ride is much smoother.

Wifi is another option that could be added in the future, Ferris said, but that also costs $1 million to add.

“We’re trying to do everything we can to reduce costs, to keep prices from going up,” Ferris said.