“We wanted to own our airspace over the Canadian Arctic, and now we do” 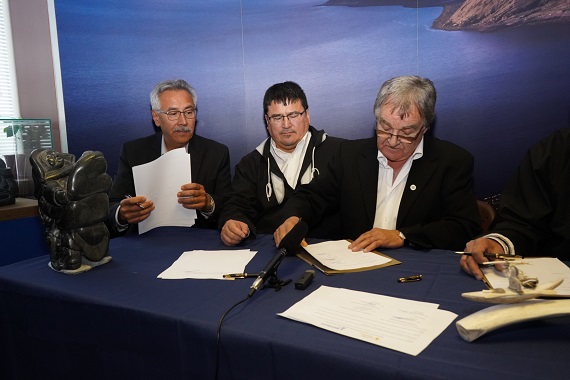 Two of the country’s largest Inuit-owned airlines will become one, following a deal made official on Friday, Sept. 28.

“It’s been a long time coming,” said Makivik President Charlie Watt, who would have overseen Makivik’s purchase of First Air in 1990.

“It has become a reality. We wanted to own our airspace over the Canadian Arctic, and now we do.”

Duane Smith, chair and CEO of the Inuvialuit Regional Corp., called the new deal a “tremendous step towards growing the economic strength of Inuit and Inuvialuit.”

First Air and Canadian North announced this past July that they had struck an agreement-in-principle to merge.

Makivik started the talks under the new direction of Watt, following his election as president of the Nunavik land-claim organization earlier this year.

The transaction to create the new airline is expected to be complete by the end of 2018; in the meantime, the two airlines will continue to operate independently.

The new venture has yet to announce details on how routes, schedules and staffing will be affected by the merger, but the partners are already pledging “better time-of-day options and better connectivity.”

Watt said the airlines are also in discussion with a Baffin-based Inuit organization to join the partnership, so Nunavut could get a stake in the new venture.

For now, the agreement completes years of negotiations aimed at a merger between the two airlines.

In 2014, Makivik and the company that then owned Canadian North, Norterra, spent seven months negotiating a merger of the two airlines, but were unable to reach a deal.

Afterwards, in mid-2015, the two companies struck a code-sharing agreement, which allowed the airlines to share routes. After much public criticism over overbooked flights, poor schedules and waylaid cargo, First Air cancelled this agreement in late 2016.

Watt said the success of this round of negotiations was thanks to the Inuit birthright organization leaders meeting face-to-face, with a common goal of benefiting Inuit Nunangat.

“There is only room for one airline in the North,” Watt said. “Let us, as a people, carry this and do what we can to improve the northern economy.”