First Air teams up with Cargojet on Winnipeg-Iqaluit freight service

“It just made sense” 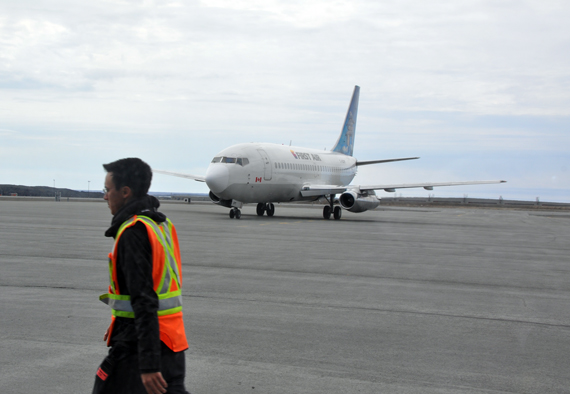 Under a new agreement, Cargojet – through First Air – will be the exclusive provider of freighter aircraft lift from the southern points in Canada to and from Iqaluit, while First Air will continue to delivery cargo within Nunavut and across the North. (PHOTO BY SARAH ROGERS)

First Air has teamed up with the Canadian air cargo service provider Cargojet to offer air freighter service between Ottawa, Winnipeg and Iqaluit.

First Air announced a new agreement June 24 that will see Cargojet take over the remaining portion of the lease on First Air’s Boeing 767-200 freighter aircraft, which will do scheduled freighter runs from Ottawa and Winnipeg to Iqaluit three days a week.

Until now, First Air’s big freighter has been carrying cargo to Nunavut from Winnipeg for the North West Co., the owner of the Northern, Quickstop and Northmart chain of retail stories.

Through First Air, Cargojet will effectively become an exclusive freight carrier from the southern points in Canada to and from Iqaluit, while First Air will continue to delivery cargo within Nunavut and across the North.

Cargojet already delivers cargo to the Baffin region for Canadian North, since the two entered into a similar contract in 2013 to carry freight from Winnipeg for Arctic Co-ops Ltd.

Makivik Corp.-owned First Air said its agreement is not related to merger talks between itself and Canadian North.

“This was a result of looking for cost efficiences,” said First Air spokesman Kevin Kablutsiak. “The utilization (of the freighter) was too low, and the operation costs are too high, so it just made sense.”

Once approved by the lessor, Cargojet could start carrying First Air’s cargo as soon as August.

The two airlines say they plan to widen their cooperation into other areas, such as joint cargo handling and aircraft maintenance.

Cargojet, which specializes in the movement of temperature-controlled pharmaceutical products and perishable food, has been courting northern airlines since the launch of the Nutrition North Canada in 2010.

Under Nutrition North, retailers must negotiate their own deals with airlines to ship subsidized nutritious food to northern Canada.

Cargojet told a House of Commons committee in 2010 that it was capable of reducing the cost of flying nutritious food to Nunavut by as much as 25 to 30 per cent.

Cargojet could do this because its fixed costs are already covered by the revenue it generates from its national network of overnight flight routes, its vice-president of business development, Jim Ballingall, told the committee.

Ballingall also worked for many years as vice-president of marketing at First Air.