Health officials coordinating response for those with high levels of heavy metals, like mercury, cadmium or lead 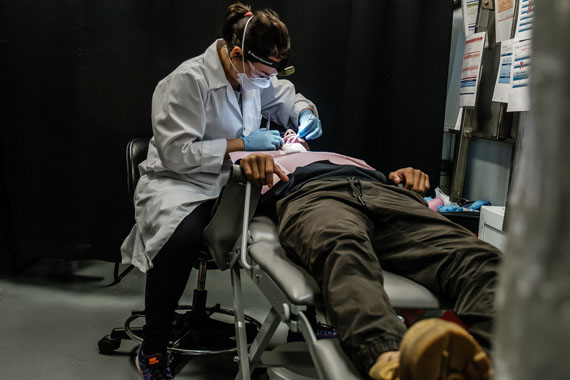 A participant from Inukjuak undergoes a dental exam during the 2017 Qanuilirpitaa health survey, which was based aboard the CCGS Amundsen and visited each of Nunavik’s 14 communities. (FILE PHOTO)

The Qanuilirpitaa? 2017 health survey, based aboard the CCGS Amundsen, examined more than 1,300 Nunavimmiut adults last year when its health care staff travelled to all 14 Nunavik communities between August and October 2017.

As part of the process, volunteer participants were offered their personal results, while a copy would also be sent to their local health care centre.

Participants who were found to have sexually transmitted infections, severe anemia or blood in their stools—issues that require immediate attention—have already been contacted for followup with their health care provider, Nunavik’s department of health said in a news release on Tuesday, Aug. 14.

The department said it is coordinating a response to those participants who had high levels of metal contaminants, like mercury, cadmium or lead.

The region’s previous 2004 health survey, Qanuipitaa, found Nunavik Inuit were exposed to metal and persistent organic pollutants through their marine mammal and fish diet, and set out to begin monitoring those emerging environmental contaminants.

The results of this second survey, 13 years later, should offer researchers and communities a sense of how those metal concentrations have changed.

The survey gathered individual data but was also set up to capture and create a community profile, which Qanuilirpitaa researchers will provide to each of Nunavik’s 14 villages.

The survey results are also expected to identify which new specialized health services should be established in the region.

Based on available data, the health board is now looking at the possibility of offering colon cancer screening in Nunavik, although the survey results will confirm that.

More details on last year’s survey will be released in the coming months, says the Nunavik Regional Board of Health and Social Services.