KRPF continues to negotiate a new funding agreement for 2018-23 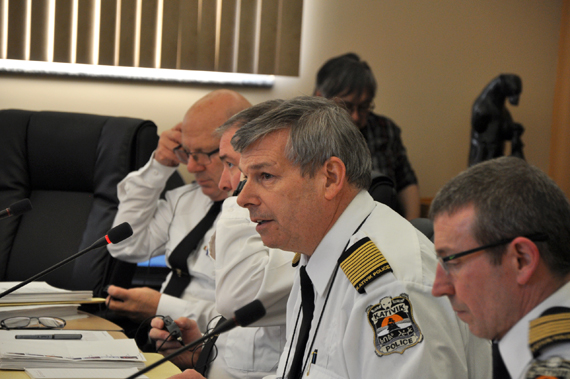 The Kativik Regional Police Force has deployed the first handful of Tasers to detachments throughout Nunavik, with the goal of introducing more “intermediary” weapons aimed at reducing fatalities caused by confrontations.

In March, the KRPF received its first Taser at its Kuujjuaq detachment and this past month, three more of the stun guns were sent to Inukjuak, Puvirnituq and Salluit.

“It is the KRPF’s plan to have at least one Taser per community in the future,” the police force said in its quarterly report, presented to Kativik Regional Government councillors meeting in Aupaluk last week.

“The KRPF is also exploring the possibility of acquiring other non-lethal intermediary weapons.”

A new agreement to fund policing in Nunavik is expected to be in place by June, police chiefs told the KRG councillors meeting.

The most recent agreement expired in March. The new funding agreement would cover the period from 2018 to 2023.

Last December, the KRPF submitted its funding request to both levels of government. The KRPF’s former chief, Michel Martin, who resigned in February, was contracted to help negotiate the new agreement.

Under the new agreement, the KRPF has asked for additional money to train its officers to detect cannabis-impaired drivers, ahead of the federal government’s plans to legalize the recreational use of marijuana by this summer.

Public Safety Canada said money from the previous agreement will continue to fund the KRPF’s work until a new agreement is in place.

The KRPF released statistics on its staffing this week that shows a young, male and non-Inuk police force.

There are currently 40 permanent and 36 temporary police officers working for the KRPF, along with eight “inactive officers” or members who are on leave.

Of that overall group, just two police officers are Inuk, while three are women.

Statistics provided to KRG’s May 27-31 council meeting also showed that about three-quarters of all of KRPF’s officers are in their 20s.

And thirty-eight per cent of officers have worked for the KRPF for less than six months.

The KRPF is moving to hire more Indigenous candidates; the force has hired four First Nation candidates who will attend basic training at the province’s École nationale de police du Québec this summer, with the intention of starting work in the early winter.

The force notes that KRPF officers are frequently recruited by other federal and provincial agencies.

“Officers are in demand for their experience and knowledge serving northern communities,” the KRPF said in its activity report.

The Kativik Regional Government and Quebec’s Ministry of Public Security reached a funding agreement earlier this year to renovate or build new police stations in each of Nunavik’s 14 communities.

The first two communities to see new police facilities will be Inukjuak and Puvirnituq, KRG councillors heard this week.

The KRG and Quebec’s ministry are currently negotiating an agreement for the construction of new police stations in Puvirnituq and Inukjuak for a total of $20 million. The construction work is expected to begin in 2019, the KRG said.

That’s the first phase in a five-year plan to either renovate or build new stations across the region.