Inuit food insecurity in Iqaluit up to 11 times greater than for non-Inuit: research 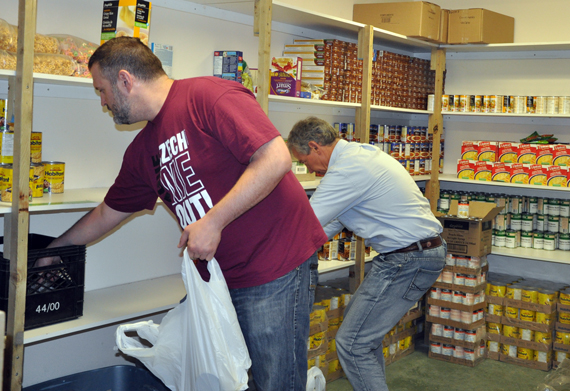 Volunteers stock the shelves at Iqaluit’s Niqinik Nuatsivik food bank, one of the organizations in Iqaluit which helps hungry Iqaluit residents. (FILE PHOTO)

Inuit who live in Iqaluit are nine to 11 times more likely than non-Inuit to suffer from food insecurity.

The prevalence of food insecurity in Iqaluit was more than three times higher than the Canadian average and “strongly patterned by ethnic origin,” says recent research circulated by the Circumpolar Health Journal.

In Nunavut, where 1,268 Inuit households were surveyed in 2007, food insecurity was found to affect about 70 per cent of households.

The research in Iqaluit included more than 500 randomly selected households.

“This prevalence of food insecurity was particularly high given the strong economic growth in Iqaluit associated with resource development, government and associated services,” note the researchers from McGill and Guelph universities.

“This result indicates that food insecurity remains a problem even in large Canadian northern communities,” they said.

And to achieve any kind of success in dealing with food insecurity in the North, food policy must take into account stresses facing contemporary Inuit settlements, leading to low rates of educational attainment, higher unemployment and food security challenges, they conclude.

A more recently published study from health researchers at the University of Ottawa and the University of Northern British Columbia, also published in the Circumpolar Health Journal, suggests increased access to country foods through new sharing networks and a “co-management agency” could help reduce food insecurity among Inuit.

Researchers determined that the decline of country food harvesting can lead to a diet of “more expensive and less nutritionally dense store-bought foods.”

“Given the superior quality of country foods and their association with food security, and Inuit cultural health and personal identity, developing skills and awareness for adaptation, promoting regional sharing networks, forming a co-management agency and continuing nutritional monitoring may potentially preserve the nutritional integrity of Inuit diet, and in turn their health and cultural survival,” they said.