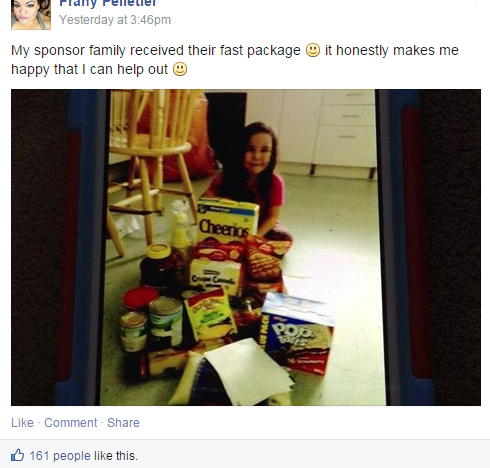 You could call it a food love-in.

It’s a scene now posted regularly to the popular Facebook group Helping Our Northern Neighbours: a photo of an Inuk child sitting on the floor at home, surrounded by non-perishable food items like boxes of cereal, pasta and canned vegetables.

Above the photo, a Kugaaruk mom offers her thanks to the package’s sender — in this case, another mom in Regina, Saskatchewan. “This means so much!” she writes. “My two older kids are in school right now. I can’t wait til they get home [they] will be very happy.”

Underneath the Kugaaruk mom’s post: a flood of comments, most of them happy face emoticons and hearts.

The Helping Our Northern Neighbours movement has its roots in Nunavut, where it branched off last year from another Facebook group, Feeding My Family, aimed at raising awareness of food insecurity in the North.

Launched last summer by Vancouver Island resident, Jennifer Gwilliam, Helping Our Northern Neighbours works to send packages of non-perishable food and household supplies to families in need, the majority of them in Nunavut.

But in recent weeks, the group has exploded to more than 12,000 members, with chapters opening up in communities across the country. Gwilliam said she’s helped to match southern donors with some 600 families across the North.

While a group like Feeding my Family looks at food security through a wide lens, Helping Our Northern Neighbours is simply about feeding hungry families, now, she said.

“I have been blown away by the way this organization has grown recently, and how word of our work seems to be everywhere,” said Gwilliam, who has applied to Revenue Canada to gain charitable status for the group. “I think it touched the hearts of Canadians who had no idea that these things were going on.”

In a post on the group’s Facebook page Jan. 29, Gwilliam informs members that an infant from a community in Nunavut has been medevaced to a southern hospital to be treated for malnutrition.

Unable to buy fresh milk, the child’s parents had to resort to giving the baby coffee whitener to drink.

“This simply should not be happening in a country such as ours where we have ample resources, if we only share them,” she said.

In Nunavut’s capital, Feeding My Family founder Leesee Papatsie has become the territory’s spokesperson on issues of food insecurity.

And the growth of Helping Our Northern Neighbours has been a boon to her own efforts, she said, as it spread awareness of the issues that Nunavummiut face.

“When Jennifer posted that status on the baby being medevaced, I thought, it’s bad that is had to go to that, but that really paints a picture,” Papatsie said. “This is what’s happening in Nunavut.”

Now, she said, the dozens of questions Papatsie used to have to field every week from Canadians wanting to know how they can help, can be directed to Gwilliam’s group.

“It gives us time to focus on what we’re doing,” she said.

The flip side, Papatsie said, is that food packages offer a very temporary solution to widespread poverty plaguing the territory.

“It’s good that Nunavummiut are getting help, but they need to learn from this — to look at ways to better educate themselves,” she said. “This should not be the solution; there needs to be another policy or plan in place.”

Gwilliam agrees, but is clear that isn’t Helping Our Northern Neighbours’ mandate. And group members who post on the page to criticize the group as being a “band-aid” solution are quickly told to take that discussion elsewhere.

“I am actually the one who started referring to our group as a band-aid solution — what we’re doing is not the answer,” she said.

“Something needs to change at the governmental level. However that takes time and is not going to be of much use if the intended targets of the help have died of starvation in the meantime.”

But the long-term solution to Nunavut’s food insecurity remains uncharted, as governments and Inuit organizations try to tackle the different issues at the root of poverty.

As one Nunavummiut poster to the Helping Our Northern Neighbours page suggests: “Reclaiming independence, goal setting, healing, education and job opportunities can’t have one with the other,” wrote Millie Kuliktana.

And with a new spotlight shining on the territory’s hunger, Papatsie said Nunavummiut must continue to work to ensure the North is being fairly portrayed — and not as a cold and sad place.

“Because we shouldn’t be disabled by this,” she said. “We have a beautiful land and a strong culture.”